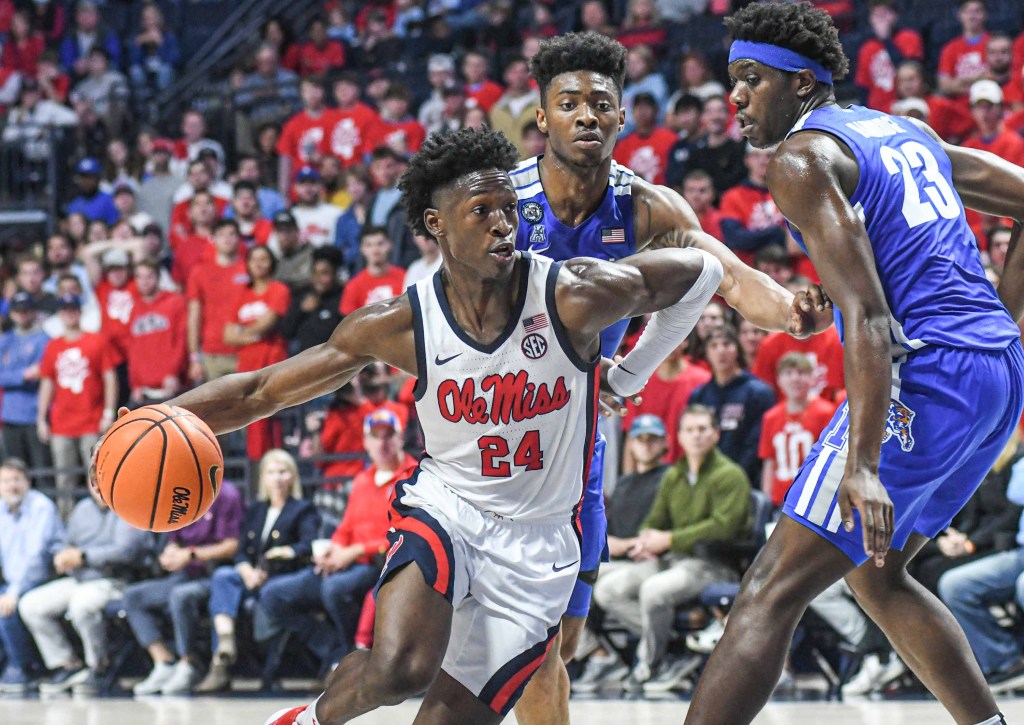 Ole Miss guard Jarkel Joiner (24) drives against Memphis at the Sandy and John Black Pavilion, in Oxford, Miss., Saturday, Dec. 4, 2021. Joiner entered his name into the transfer portal on Tuesday after two productive seasons with the Rebels. (©Bruce Newman)

Joiner made the announcement on social media Tuesday evening, posting a heartfelt message to both the Oxford community and the Ole Miss basketball staff.

“First and foremost, I would like to thank God for allowing me to play the game that I love most,” Joiner wrote. “Also, I would like to thank my family and close friends for supporting me through this journey so far. Many thanks and appreciation to Ole Miss, Coach Davis, his coaching staff and teh amazing fans that have supported me as well. After many prayers and discussions with my family, God has lead me in a different direction for my last year of eligibility. So, with that being said, I will be entering my name into the transfer portal. Oxford will forever and always be home!”

The former Oxford High School standout spent two seasons at Cal State Bakersfield before transferring to Ole Miss in 2019. He sat out one season due to since-changed transfer rules before quickly emerging as a go-to scorer for the Rebels in 2020-2021.

Ole Miss now has just six players on the roster for next season, not including incoming transfer Jayveous McKinnis. The Rebels formally announced the signing of the Jackson State star on Tuesday after news of his impending transfer was reported by multiple outlets last week.

Head coach Kermit Davis promised to be aggressive in the transfer portal following the program’s worst season since 1994-1995. The Rebels’ head man will now have to replace a central piece from last year’s squad as Ole Miss attempts to reach their second NCAA Tournament appearance in the past five years.