What in the world is going on with Ole Miss baseball? 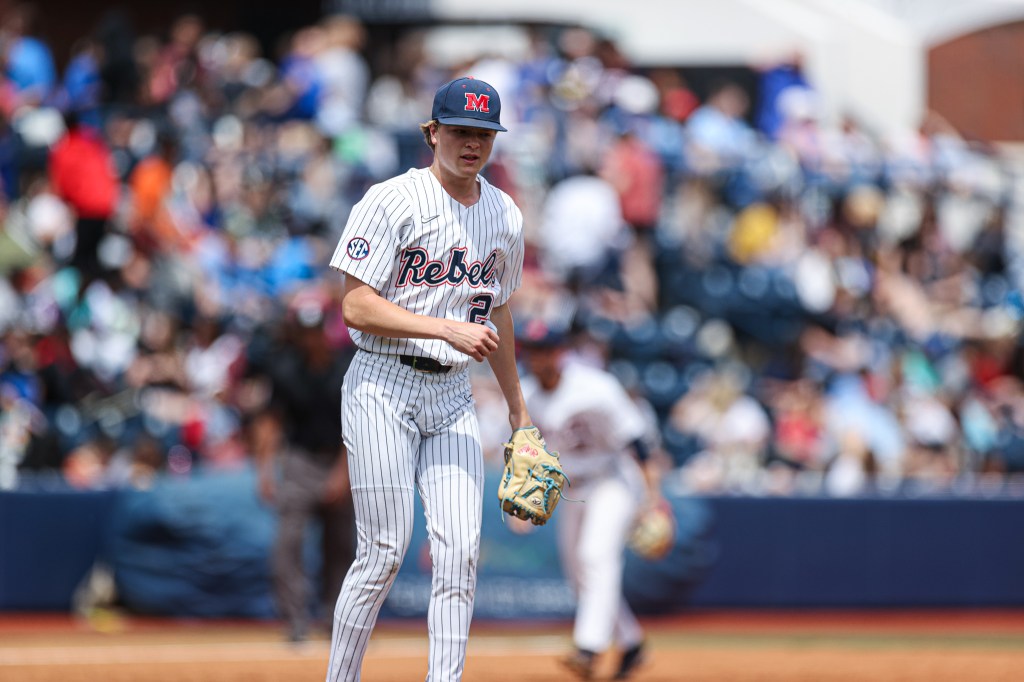 Ole Miss baseball is in a funk.

They defeated Murray State 8-2 on Tuesday to snap a four-game losing streak, but currently sit at the bottom of the SEC West standings alongside Mississippi State.

They dropped out of the latest editions of the USAToday Coaches’ Poll, the Collegiate Baseball Top 30 and the Baseball America Top 25, and sit at No. 25 in the D1Baseball Top 25, the Perfect Game Top 25 and the NCBWA Top 30.

So what went wrong?

The short answer is that the Rebels are struggling to find any consistency on the mound. Well, that’s not entirely true. They’ve been consistently bad.

Ole Miss pitchers have a combined ERA of 7.15 in SEC play, nearly two full points higher than last season’s staff. They allow more than 1.7 baserunners per inning, and do not do a particularly good job at preventing them from scoring once they get on base.

They started the season with junior Derek Diamond as the regular Friday starter, but regulated him to the Sunday role before using him out of the bullpen in the past two series. He has posted an 8.56 ERA in four conference appearances, surrendering 13 runs on 15 hits in 13 2/3 innings of work.

His initial replacement, senior transfer John Gaddis, spent three series as the Friday starter, but lost the job after giving up six runs in 1 1/3 innings against Tennessee on Mar. 25.

Since then, the Rebels have opted to go with a rotating cast of players who started the season as relievers, receiving mixed results from the likes of junior Dylan DeLucia and freshman Hunter Elliot.

DeLucia gave up just one run in 6 1/3 innings against Kentucky on Apr. 1, but has been used sparingly in relief appearances since.

Elliot gave up two runs in 4 1/3 innings in his first career start against the Wildcats on Apr. 2 before giving up three runs in three innings against Alabama on Friday.

The problem is not just with the starting rotation however.

The bullpen, which pitched extremely well in non-conference games, imploded once they reached SEC play. Rebel relievers have given up 51 runs in 60 2/3 innings in conference play as they struggle to keep runners off base late in games.

Senior stopper Brandon Johnson saw his ERA balloon up from 0.73 to 4.32 in the last week alone after he gave up three runs against Southern Miss on Tuesday before surrendering five runs to Alabama on Saturday.

The Rebels will be aided by the return of closer Max Cioffi, who pitched in just two games last year and missed the first 31 games this season due to a torn UCL.

The senior righty posted a 1.96 ERA in 14 appearances as a freshman in 2018, and won the closer job in the pandemic-shortened 2020 season when he gave up just one run in eight innings of work.

He made his season debut on Tuesday against Murray State, giving up one hit and striking out two batters in his only inning on the mound. His fastball, which topped out at about 90 miles per hour in previous seasons, hit 88 on the radar gun once but stayed in the 85-87 range for most of the inning.

He will not be relied upon as the regular closer as he works his way back into a rhythm, but will hopefully provide Bianco with a trusted arm to turn to in high-leverage situations later in the season.

Ole Miss has a loaded lineup full of sluggers who can hit the cover off the ball, but they have been far too inconsistent this season to make up for the struggles on the mound.

The rest of the lineup has not been up to par however, as no other player has an average above .240 in conference play. Right fielder T.J. McCants, second baseman Peyton Chatagnier and catcher Hayden Dunhurst are all below the Mendoza line, combining for just 23 hits in 122 at-bats.

Ole Miss has a long way to go if they want to get back into a position to host a regional, let alone make their first College World Series appearance since 2014. Even if they get more consistent production from the lineup through the rest of conference play, they will need a complete turnaround on the mound in order to reach their lofty preseason expectations.

The road ahead will not get any easier either, as the Rebels travel to Columbia in search of their first series victory on the road against South Carolina since 1997.

The Gamecocks are in the midst of an immensely disappointing season, but still boast one of the best home-field advantages in the SEC. Ole Miss will need to be at their best if they want to get back on track and turn their season around before it’s too late.