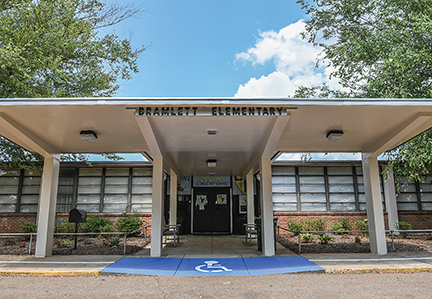 The Oxford School District is planning to address traffic issues on Bramlett Boulevard related to drop-off and pickup for students.

Before construction moves ahead, OSD Superintendent Bradley Roberson requested on behalf of the district a variance for Bramlett Elementary located at 225 Bramlett Boulevard.

AICP Director of Planning Ben Requet said the community is aware of traffic challenges and the city’s growing pains.

“[OSD], little by little, has been trying to address these issues,” said Requet. “We’ve had the construction of a new school, we’ve had the additions at other schools, etc. Now, the school district is proposing to add-on to the facility there to expand the classroom for first graders at this location, but also by doing such they are trying to address the challenges with drop-off and pickup.”

The current driveway is not long enough to accommodate the number of cars on-site during drop-off and pickup times at Bramlett and cars end up stacking on Bramlett Boulevard.

In addition to constructing new classrooms for first grade, OSD plans to create a two-lane driveway extending around the entire school property, similar to the path constructed at Lafayette Lower Elementary School on Buddy East Parkway.

After construction is completed, Bramlett will have 13 new classrooms and a new drop-off/pickup location on the west side of the property.

The variance, requested by OSD, is needed to minimize the disturbance of natural terrain and tree canopy. Two retaining walls are required on the northern end of the proposed drive because the school is located in the neighborhood Conservation Overlay District.

Construction of the retaining walls as indicated will keep this disturbance to the minimum required for the proposed site improvements which will also help to reduce erosion and stormwater runoff during and after construction.

According to Koshenina, one neighbor downhill from Bramlett has complained about erosion during previous construction projects taking place on the property. OSD and Precision Engineering are taking steps to reduce land exposure and the effects on neighboring properties.

The commissioners did not have any issues with the variance request, but Chairman RJ Rigby brought forth a crucial question regarding changes at Bramlett.

“I just have one question from a concerned member of the community aged almost six and I’m not sure it’s entirely relevant,” said Rigby. “I have to ask, what the net impact on the playground would be?”

The question brought a laugh, but Koshenina said a recess area for students is in the plans.

“The playground will no longer be where it is now,” he said. “That will be the new building with classrooms, but we are trying to accommodate a pretty nice, uniform, fairly large area for a planned out playground. So, [the students] should be happy.”

Koshenina said the corporation hopes to come before the Planning Commission next month for a site plan approval for the new two-lane driveway and classrooms.