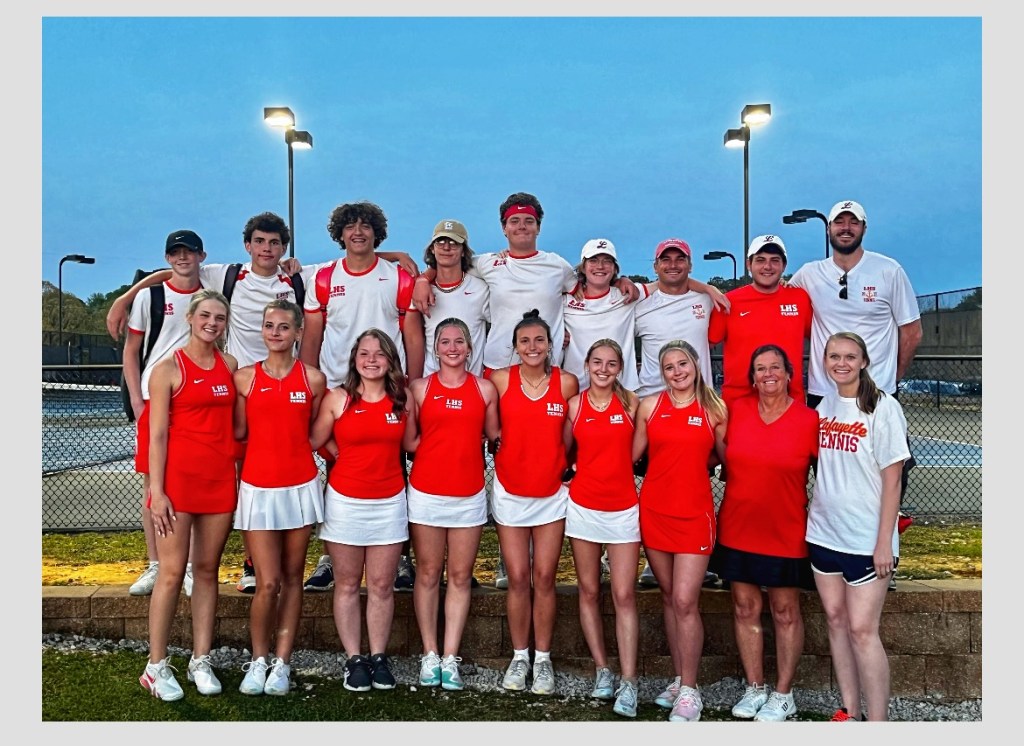 The Lafayette tennis defeated Saltillo in the North Half championship on Thursday, Apr. 14 to advance to their fourth consecutive state title game. (Debbie Swindoll/Lafayette Athletics)

SALTILLO, MISS — The Lafayette tennis team defeated rival Saltillo in the North Half final on Thursday to advance to their fourth consecutive state championship game.

The Commodores narrowly defeated the Tigers after cruising through the first two rounds of the playoffs, claiming victory in the girls’ singles match, the second boys’ doubles match and both girls’ doubles matches.

Sophomore Alexandra Lampton breezed to a win in the girls’ singles match as she dropped just two games in the first set before winning the second set 6-0 to secure the victory.

The rest of the team did not have as easy a path.

Boys’ singles competitor Matt Addy struggled mightily in his match, falling 6-1 in straight sets to lose his first match of the playoffs.

Lafayette’s first boys’ doubles pairing of Brett Lampton and Porter Lindsay held strong in each set, but fell 6-4 and 6-3 to concede their first match of the playoffs as well.

The second boys’ doubles pairing of Crosse Lindsay and Finn Rico enjoyed more success, winning 6-2 and 6-3 over Saltillo’s Will Stone and Dalton Temple.

The girls’ doubles pairings also took care of business, as Valerie Smith and Presleigh Loper won their match in straight sets (6-3, 6-2) while Hudson Lindsay and Jenna Lampton downed their competition 6-2 and 6-4.

The Commodores dropped the most competitive match of the day however, as Jake Leary and Presley Thomas fell 6-3 in the first set of the mixed doubles competition before dropping the second set 7-6.

Lafayette managed to come away with the victory however, defeating Saltillo four matches to three to move on to their fourth consecutive MHSAA Class 5A state championship game.

“It just shows consistency in the program that we are trying to build at Lafayette,” head coach Debbie Swindoll said. “We have great support from Lafayette school administration, parents and student athletes at Lafayette.”

The Commodores won the first tennis championship in school history in 2018 when they defeated powerhouse Stone High School. They returned to the title game in 2019, only to fall to Stone as the Tomcats got their revenge.

After the COVID-19 pandemic ended the high school sports season early in 2020, Lafayette claimed another state championship in 2021 with a 6-1 victory over Brookhaven in the title game.

Now the Commodores will look to add yet another trophy to their collection as they take on Vancleave for the Class 5A state championship in Vicksburg on Thursday, Apr. 21.