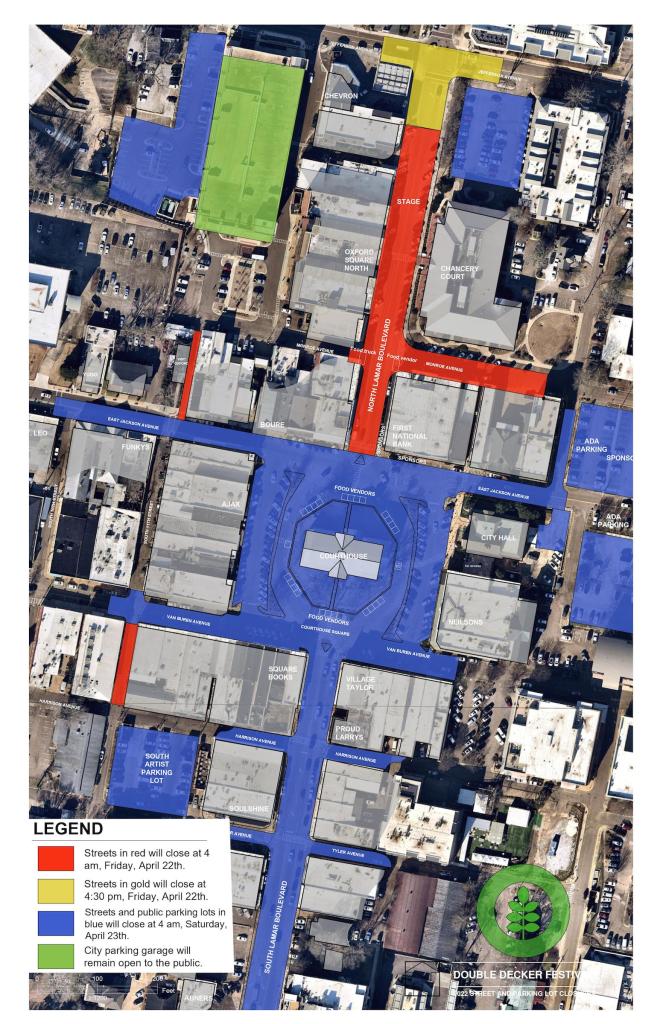 Visit Oxford and the Tourism Council are finishing up preparations for the 25th Annual Double Decker Festival including updates on road closures and transportation for the two-day event.

The Downtown area will be bustling with attendees enjoying music, food, and art from various acts and vendors in the region on Friday and Saturday, Apr. 22-23. From 10 a.m. to 5:30 p.m., attendees can purchase from the 180 art and 19 food vendors on-site.

During a regular meeting, the Tourism Council announced road closures and changes to parking accessibility Downtown.

The Blue Delta Blues Alley, the Boles Wiley Alley and a portion of North Lamar Boulevard and Monroe Avenue will close at 4 a.m. Friday, April 22.

The intersection of North Lamar and Jefferson Avenue behind the Student Activities Association-sponsored performance stage will close at 4:30 p.m. to accommodate the after-school traffic.

First National Bank will still operate its drive-thru lane. The bank’s customers will be allowed to drive the wrong way in this special case and come out through North Lamar with police assistance.

Once all road closures are in place, final preparations will be completed and the Square will be ready for the crowd of festival-goers.

“By the time the festival starts at 10 a.m. it will look like it all fell out of the sky,” said Visit Oxford Director Kinney Ferris.

The City of Oxford Parking Garage will remain open to the public during the festival. Attendees are advised to not park on the Square.

Shuttles will run from Oxford High School and University of Mississippi South Oxford Center Parking Garage to the festival from 10 a.m. to 11 p.m. Friday and Saturday. Roundtrip fare costs $5. Additionally, ride-share and ride-share pick-up spots will still be accessible to the public and Oxford University Transit will be re-routed to the Old Armory Pavilion.

“We’re really worried about the students because three-quarters of them have never experienced Double Decker, so we’re worried that they won’t get the memo,” said Ferris. Despite the council’s concern, they are receiving help from law enforcement and student groups to spread the message.