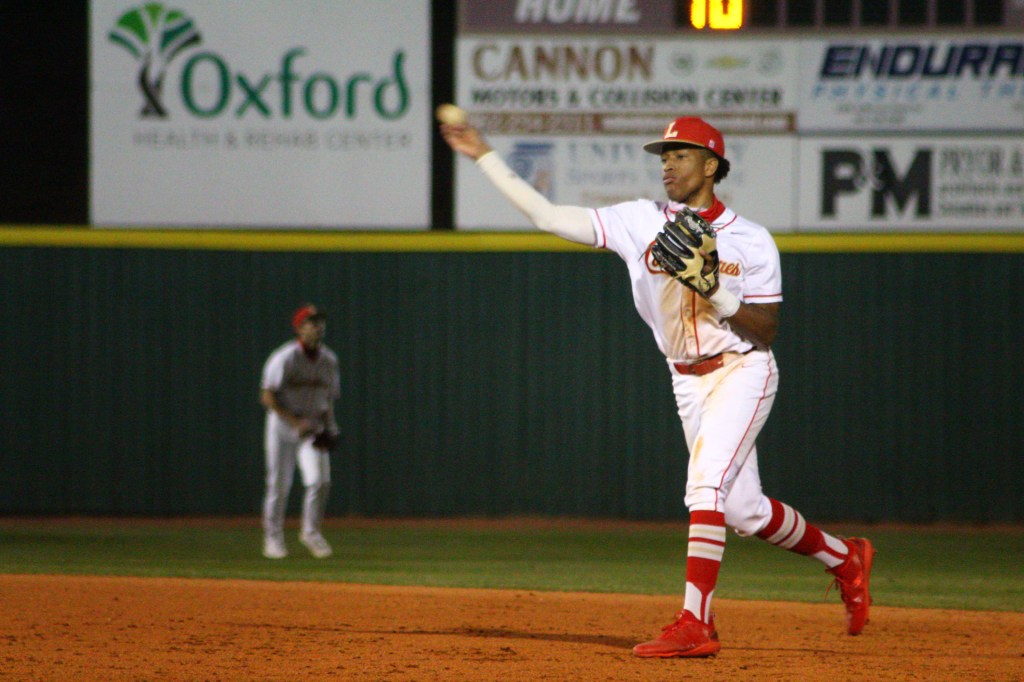 Lafayette's Tyrus Williams throws to first in the Commodore's 6-3 loss to Oxford in the second game of the Crosstown Classic Series at W.V. Brewer Field on Friday, March 4, 2022. Williams was named Region 2-5A Player of the Year after leading the Commodores to a perfect 9-0 record in district play. (Claire Anne Pugh/Commodore Media Group)

OXFORD, MISS — After finishing a perfect 9-0 in district play, the Lafayette baseball team saw 10 players named to the All-Region team, including Region 2-5A Player of the Year Tyrus Williams.

“Tyrus is an exceptionally talented and special player, one of the most special talents that I’ve ever had the opportunity to coach,” Walker. “He had a difficult year last year… but this year he’s bounced back in a big-time way. He really found a home in the leadoff spot… and that’s kind of made us go a little bit.”

“The biggest thing with this group, probably more than any group I’ve coached, is the personality of the team has really been able to show,” Walker said. “They’ve got a supreme confidence and they believe in themselves. It’s kind of become infectious within our whole group. They know what we’re about, they know what we’re trying to do and they feel like they’re able to accomplish that every night.”

Walker said the team stressed the importance of legacy all season, emphasizing the significance of leaving an impact on the program that stands the test of time.

Lafayette will try to do just that in the postseason as they pursue their first state title since 2006.

The Commodores will face the winner of Saltillo and Canton in the second round after receiving a bye in the first round as Region 2-5A champions. The best-of-three series is scheduled to begin on Friday, Apr. 29 at W.V. Brewer Field.