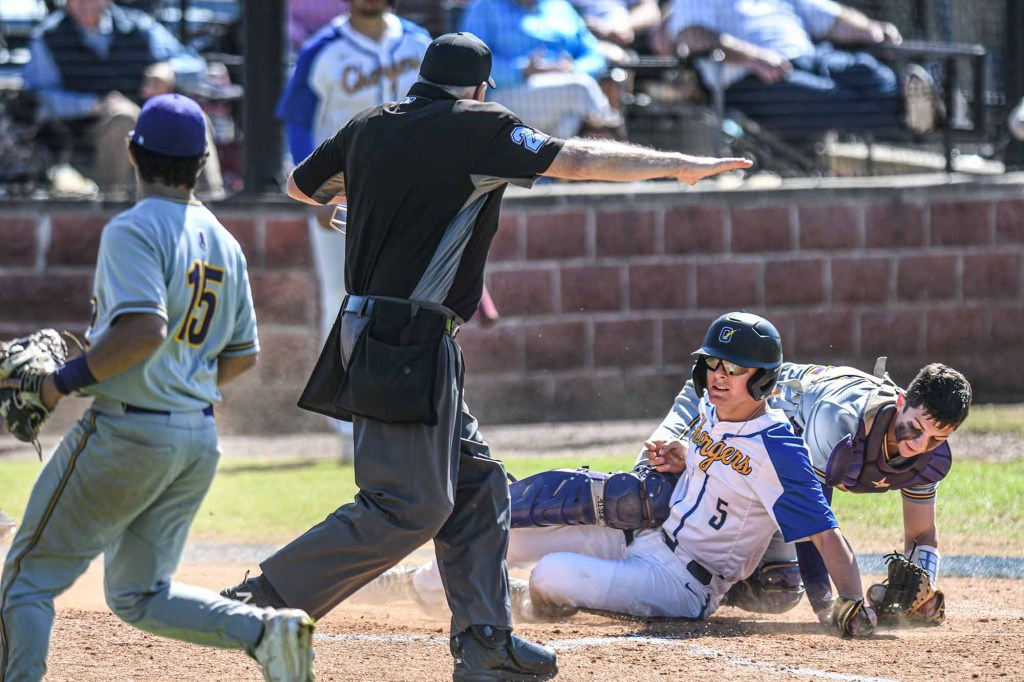 Oxford's Campbell Smithwick (5) avoids the tag at the plate in the Chargers' 7-3 win over DeSoto Central at Edwin Moak Field in Oxford, Miss., Saturday, March 19, 2022. The Chargers defeated Vardaman 13-0 on Thursday to close out their regular season. (©Bruce Newman)

OXFORD, MISS — The Oxford baseball team coasted to a mercy-rule victory over Vardaman on Thursday night in their final regular-season action before turning their attention to the playoffs.

The Chargers (19-8, 7-2 Region 1-6A) plated a run in the first on an RBI single by shortstop Ty Wicker before exploding for seven runs in the second inning to blow the game open early.

All seven runs came with two outs in the inning, as pitcher Dixon Webb and infielder Joe Maxcy each grounded out before the Chargers rallied with five straight hits, including a two-run bomb from catcher Campbell Smithwick that put Oxford up 4-0. They plated three more in the inning courtesy of a two-RBI single from Webb followed by an RBI single from infielder Thomas Rayburn.

Oxford added four more runs in the third as third baseman Brady Stinnett drove in a run on an RBI single before first baseman Ben Goubeaux roped an absolute laser over the wall in left-center for a three-run home run. The senior slugger, who has struggled at times this season, was mobbed by his teammates at the plate as he finally broke through with his first long ball of the season.

“I think that was the first [home run] of his high school career but we’ve been waiting,” Hoggard said. “I mean he’s been putting on an absolute show the past couple weeks in batting practice and he’s been hitting the ball hard, having good at-bats all year long, so it was good to see him get one over the plate and drive it.”

Webb was masterful on the mound for the Chargers in his final regular-season start for Oxford. The senior righty tossed five scoreless innings, surrendering just one hit and striking out seven batters in a near-perfect game.

“Dixon’s been rock-solid for us every week. He did exactly what he’s done all year. He mixes speeds, he’s in the zone, fires strikes, works quickly. When we make plays behind him it’s usually a quick game,” Hoggard said.

The Rams were unable to come up with an answer for Webb all night, and the Chargers rode their senior leader’s strong performance to a 13-0, five-inning victory.

Oxford snapped a short two-game losing streak with the win, and now turns their attention to the playoffs, where they will receive a bye in the first round as Region 1-6A champions before facing the winner between Clinton and Center Hill in the second round.