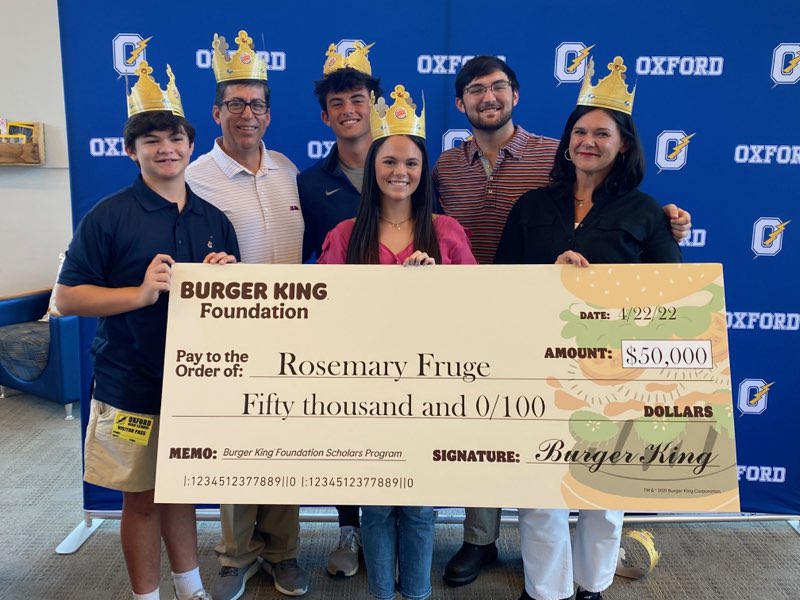 OXFORD, MISS — Oxford High School senior Rosemary Fruge received a $50,000 scholarship from the Burger King Foundation on Friday in recognition of her academic and extra-curricular achievements.

Fruge, a member of the golf team and the Fellowship of Christian Athletes at Oxford High, was one of three students from across the country who were selected for the largest cash prize.

“She’a an awesome, awesome young lady,” said OHS math teacher Logan Dodson. “She’s a woman of faith, a great friend, selfless, and does everything for everybody else.”

The senior was recognized with a ceremony in the OHS library on Friday, where she received a check from Burger King Foundation representatives.

Teachers, coaches and administrators all praised Fruge’s leadership and dedication to others, saying there is nobody that sets a better example of how to be a Charger than Fruge.

“Rosie is the ultimate leader in the classroom,” said Dodson. “When she was in there for [my] class it was always full-tilt, she never had a bad day and was an outstanding leader.”

“If we could dismiss the school we’d pack this thing in a hurry,” said FCA advisor Bruce Taylor. “She’s a friend to everyone, and that’s why she has so many friends… this young lady here builds people up.”

The Burger King Foundation has donated more than $35 million in scholarships in the last decade. The organization awarded over $4.5 million this year alone, including three James W. McLamore Whopper Scholarships for $50,000.

Fruge is the first OHS student in the school’s history to receive the top prize.