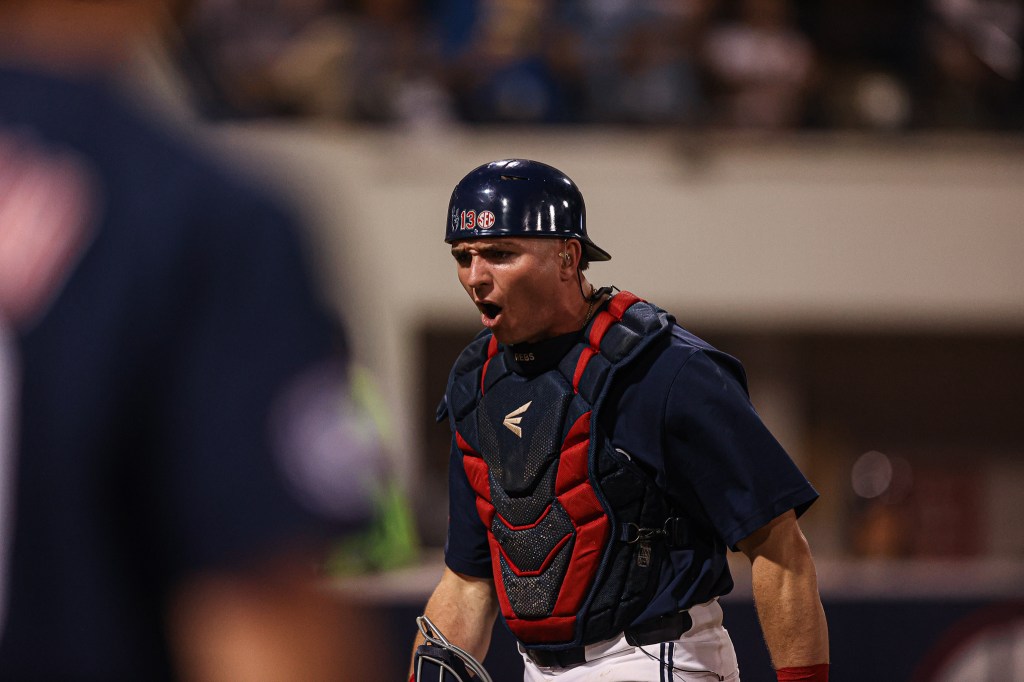 Ole Miss catcher Hayden Dunhurst celebrates after picking off a runner in the fifth inning of the Rebels' 10-7 loss at home to Mississippi State on Friday, Apr. 22, 2022. (Josh McCoy/Ole Miss Athletics)

Ole Miss (22-16, 6-11 SEC) gave up two runs in the sixth, four in the seventh and three in the eighth as the wheels fell off in the late innings.

“I don’t want to take anything away from them, they beat us tonight,” said head coach Mike Bianco. “It was one that leaves a bad taste in our mouth because we started so well… they just had a lot of really good at-bats.”

The Rebels jumped out to a lead in the bottom of the first when third baseman Justin Bench, shortstop Jacob Gonzalez and first baseman Tim Elko launched back-to-back-to-back home runs on the first four pitches of the game.

The offense went cold through the middle innings however as they combined to go 1-for-14 with runners on base through the first seven innings.

“We had some missed opportunities that we should’ve capitalized on,” said second baseman Peyton Chatagnier. “I don’t know if you can necessarily work on that physically but maybe a little bit mentally. We just have to grind out at-bats, be a little tougher at the plate.”

Lack of production with runners on base has been a theme for the Rebels throughout conference play. Ole Miss has scored 104 runs in conference play, 49 of which have come on the long ball. Their feast-or-famine approach at the plate has cost them at times in SEC games, as they have stranded 111 runners on base through their first 17 conference games.

The offensive struggles have been compounded by their struggles on the mound, where the Rebels have combined for a 6.33 ERA in conference play.

Freshman Riley Maddox got out of a jam in the fifth, but gave up two runs on three hits in the sixth as Mississippi State clawed back in.

Sophomore Jack Dougherty came in for Maddox in the sixth after the righty issued a two-out walk that put a runner in scoring position for the third time in the inning. The freshman reliever appeared to be experiencing discomfort in his throwing arm, and got the hook after having it examined by trainers.

“He saw the doctor, just had some tightness in his forearm,” said Bianco. “It’s something that he’s had a little bit of before. It seems far away from the ligament so we think he’s gonna be okay.”

Dougherty forced a popout to third to get out of the inning, but gave up four straight hits to start the seventh including a pair of two-run homers. He exited after giving up four runs on four hits in just 0.1 innings as Bianco opted to bring in closer Brandon Johnson with the Rebels down three runs in the seventh.

Johnson worked his way out of the inning, but gave up three more runs in the eighth as Missisippi State extended their lead to 10-4.

“They had a lot of good at bats in the midst of three inning where we just couldn’t get off the field and that was really the ballgame,” Bianco said.

Ole Miss scored three runs in the bottom of the inning to cut the deficit to three, and managed to get the tying run to the plate in the ninth before Bench grounded into a fielder’s choice to end the game.

The Rebels will try to secure their first series win over the Bulldogs since 2015 in the rubber match on Saturday. First pitch is scheduled for 3:30 p.m. after the conclusion of the Grove Bowl.