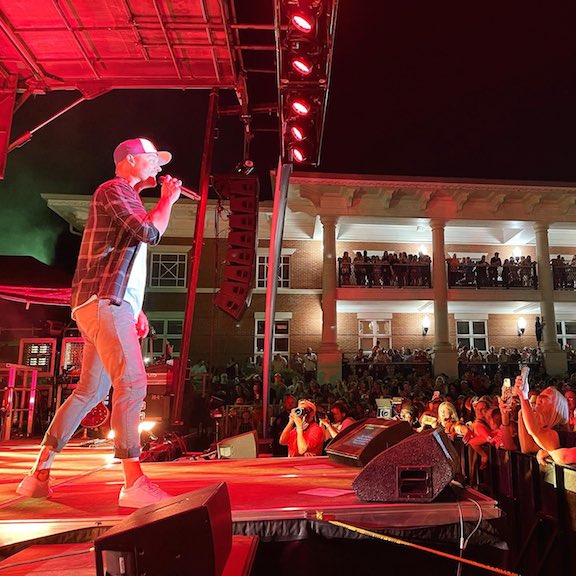 The first day of the Double Decker Festival has come and gone but the festivities are just getting started! Friday saw the beginnings of the long-awaited return of Oxford’s beloved festival.

The two-day event began on an especially warm April day. The community ventured out around the district to see the set up of the Student Activities Association-sponsored stage and small events like the Art Demos in Boles Wiley Alley, giving the festival early birds a taste of what is to come.

The artists were not the only people feeling the influx. Restaurants and local shops were bracing themselves for the festival crowd that they have not witnessed in two years.

According to Marketing Director Taylor Wilkinson of Zoe by La Rousse, Double Decker was sorely missed on the Square by residents and merchants alike.

“It is wonderful,” said Wilkinson. “We’re thrilled. There is an energy in Oxford now this weekend that’s similar to a big football weekend is like but it’s also different with the artists and the music and us merchants are just over the moon that we’re back up and running.”

Wilkinson said the COVID-19 pandemic not only put a pause on the festival, but it made things difficult for small and locally-owned businesses. For two years, merchants were unsure about their future.

“It’s not easy being a small retail business in any town but certainly in a small town,” she said. “It’s been a difficult and scary time, but now it looks like things are looking up and we’re on the other side of it. Doors are open, the sun is shining and people are out spending money which is great.”

And for Zoe by La Rousse, the timing of Double Decker could not have been more perfect. The store reopened two weeks ago after a complete rebranding from a cosmetic store toa boutique that sells clothing, high-end jewelry, handbags and lingerie. Now that Double Decker is back, the store can reintroduce itself to Oxonians and visitors.

“We totally rebranded Zoe and made it an upscale boutique on the Square,” said Wilkinson. “For us, it’s not just about sales, it’s about new brand awareness, so this could not have come at a better time for Zoe and La Rousse brands.”

But Wilkinson is sure to enjoy the festivities even within the store front. Just out Zoe by La Rousse’s window, you can see the SAA main stage where performers like The Wilkins Sisters, al-country soul band 49 Winchester and Brett Young would play later that day.

“We definitely get a good show,” Wilkinson said with a laugh. The Oxford native remembers attending the first Double Decker Festival and calls the watching the festival grow “unreal.”

“I looked outside and went ‘Oh my gosh, this is the 25-year anniversary,'” said Wilkinson. “It was such a great undertaking back then but to watch it have grown over the 25 years, to see how many people have come just for this from all over the country? It’s incredible for Oxford. It’s unreal.”

As store owners completed preparations, the early hours saw a steady crowd. However, by the late afternoon, the after-school and after-work crowd piled in for the highlight of Double Decker: the music.

The Wilkins Sisters took to the stage at 6:15 p.m., 49 Winchester at 7:45 and at 9:15 Friday’s headliner Brett Young appeared in front of thousands of people ready to start their weekend off right.

This crowd for @BrettYoungMusic is incredible!! We are so happy to see y’all back at DD ❤️🚌 pic.twitter.com/0OcL2O4IKd

But the fun did not stop last night. Today the festival will be in full swing.

The day started off with the annual Double Decker Spring Run presented exclusively by Oxford Ortho & Sports Medicine. The run began 7:30 a.m. with the 5K and 10K run.

The historic Courthouse Square is home to 180 artists and 19 food vendors ready to serve the art-and-food hungry community.

As you walk around the historic district, you will see stands advertising anything from paintings to metal statues to birdhouses. Anything you can fathom, you will probably encounter on the Sqaure. If you would like to speed up the viewing process and make a beeline toward a specific artist, Visit Oxford has created an interactive map for public use.

Oxford’s own Happy Landing, an alternative folk band, will begin the music portion of the festival at 11 a.m.

Going into the night portion of the acts, legendary R&B and gospel singer Mavis Staples takes the stage at 5 p.m. Staples is both a Blues and a Rock and Rock Hall of Famer; a Grammy award-winner, a National Arts Awards Lifetime Achievement recipient, a Kennedy Center honoree, as well as a chart-topping soul/gospel/R&B pioneer.

The final performance of the evening is The Revivalists who take the stage at 8:30 p.m. The chart- topping rock band have been nominated for a Billboard award, two iHeartRadio Music awards and were named Billboard’s Top New Rock Artists of 2017.

Be sure to check out smaller events on the Square like Best Dressed Pet Contest sponsored by the Oxford Animal Resource Center at 10:30 a.m. on the southside of the Courthouse lawn. The festival also offers something special for the children. Visit the Square Fair Children’s Area from 10 a.m. to 6 p.m. at the Chancery Building Parking Lot.

If you’re listening out for blues music, visit the Blue Delta Blue’s Alley beginning at noon. Located in the alley next to The Lyric on South 11th Street, you can find music played by Joe Austin and the Tallahatchies at 12 p.m., Juke and the Pearl Street Jumpers at 2 p.m. and Mr. Sipp at 4 p.m.

Don’t miss out on the fun.

Shuttles for the Double Decker Festival run today from 10 a.m. to 11 p.m. from Oxford High School and the University of Mississippi South Oxford Center Parking Garage. Roundtrip fare is $5.