Double Decker, a successful return of a local festival 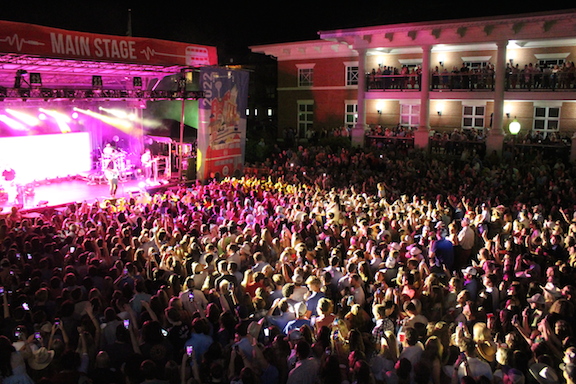 The 25th Annual Double Decker was a certified success. Tens of thousands of people returned to the art and music festival on the historic Courthouse Square. (Photo: Joey Brent)

Double Decker made its return to Oxford and what a return it was.

After a two-year absence, the festival returned in full force for its 25th anniversary with crowds and crowds of enthusiastic festival-goers ready to enjoy the art, the music, the food and the warm spring day.

The city has no official way to calculate the number but they are quite certain that this year garnered their biggest crowd yet. Approximately 20,000 people attended the festival Friday and about 16,000 the following day, but the city estimates at least 112,000 individuals who visited the Square during the two-day event.

“We definitely could tell that people didn’t want to miss it because they have been missing it the last few years,” said Kinney Ferris, Visit Oxford Executive Director.

The event received many positive comments, Ferris told The Eagle. Especially from art vendors who have experienced many other similar events.

“They kept raving about how organized it was, how nice customers were and how successful the day was for them,” she said.

Visit Oxford and Tourism Council approached planning for the 25th Annual Double Decker Festival with some hesitancy, but getting back in the groove was easier with the help of multiple departments. The final results highlighted the team effort.

“We were talking with Oxford Police Department and our Emergency Management Director and they said there were no problems,” Ferris said. “And Lee Ann Stubbs is a wonderful coordinator who works to pull every detail together and is always working to find ways to grow and make the festival better.

“Any kind of kinks we had were overcome very quickly. I mean it was really like a flawless event. Every city department worked so well together and everybody had such a great respect for the other departments and it shows. To have a free festival that is bringing in the amount of people that this does is kind of unheard of.”

Now that Double Decker has come and gone, Visit Oxford is onto preparations for other upcoming events for the community.

“We have a punch list of things to improve on next year and we’re working with other festivals on dates, but we know we have our Christmas stuff,” said Ferris. “And as of right now, it’s big next thing coming.”