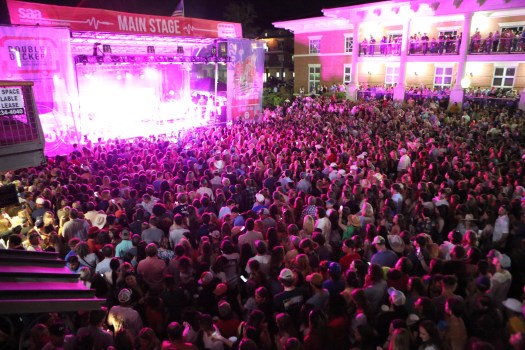 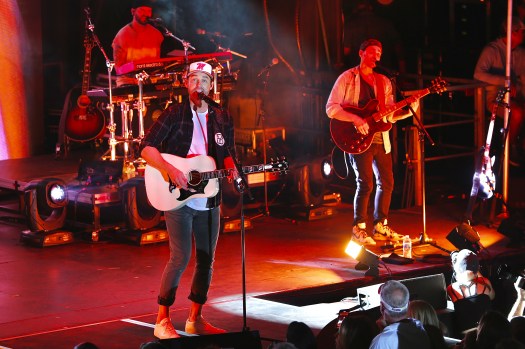 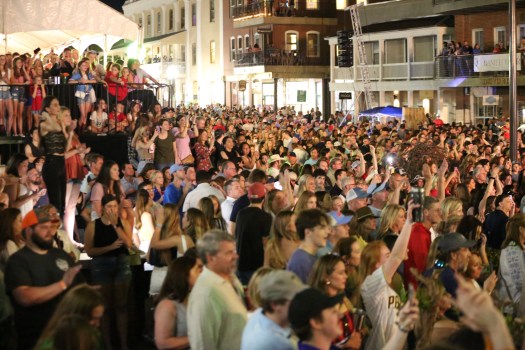 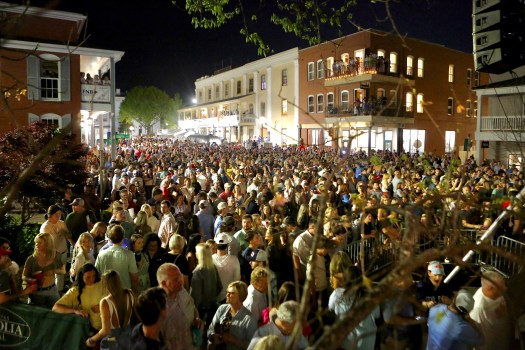 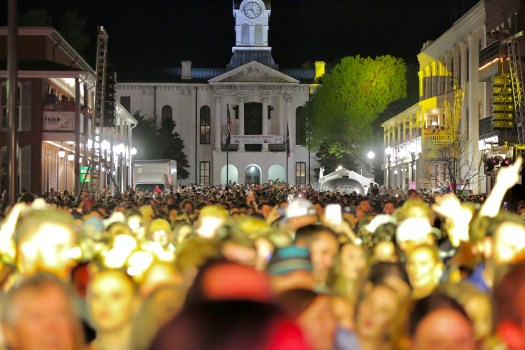 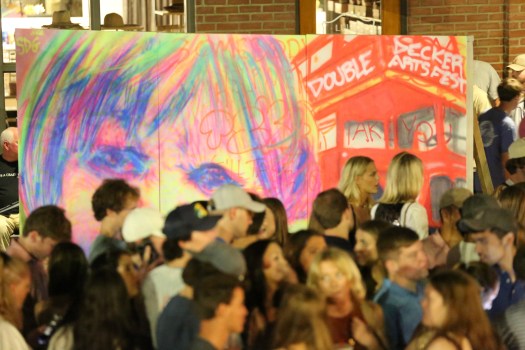 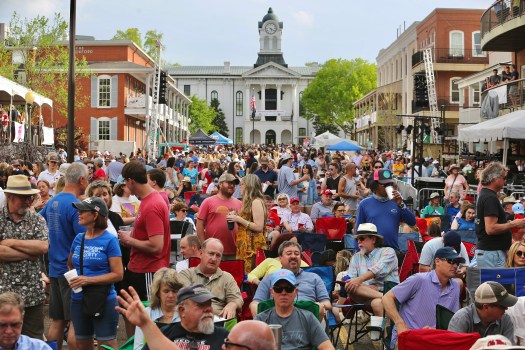 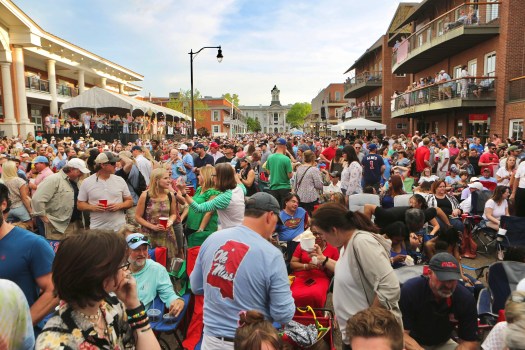 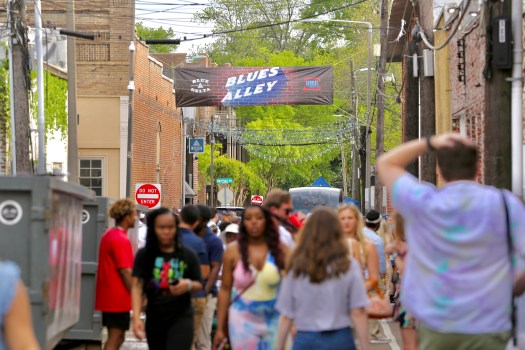 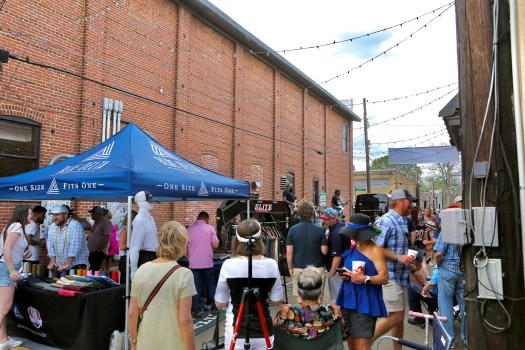 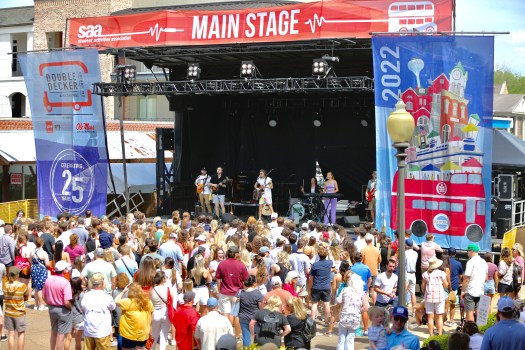 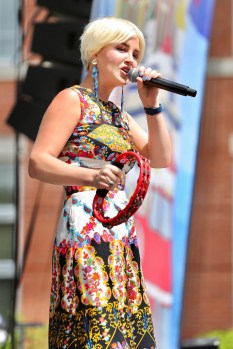 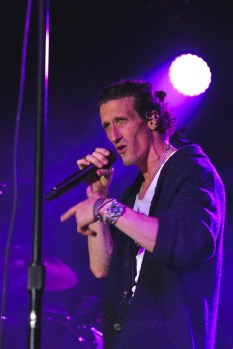 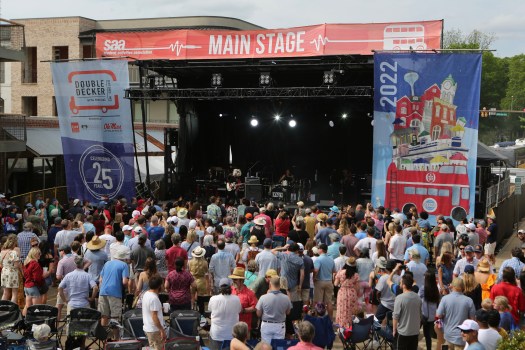 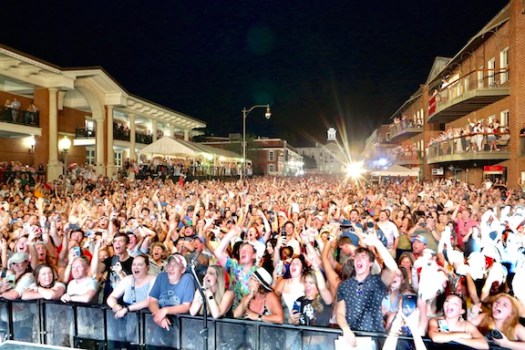 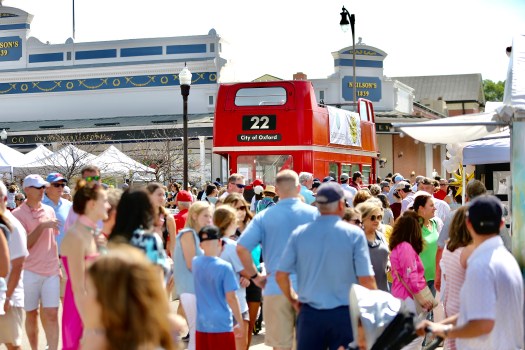 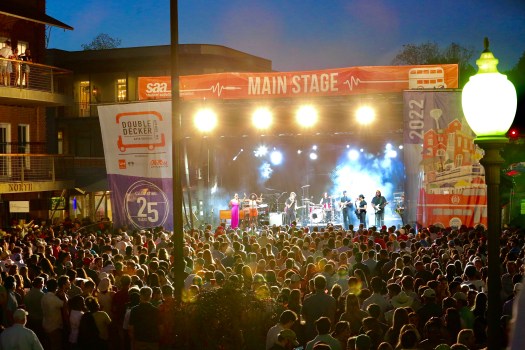 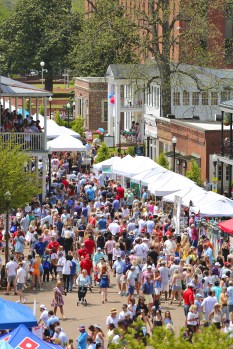 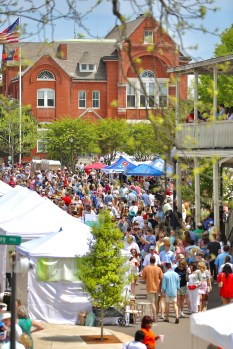 The small college town of Oxford, MS swelled in size this past weekend, as it hosted the 25th anniversary of the Double Decker Arts Festival.

The event, which has not been held since 2019 due to the COVID-19 pandemic, saw its largest crowd yet as it expanded its lineup to include a Friday night headliner. A record number of art vendors were set up on Saturday all around the downtown Square, as well as local food vendors and an area dedicated to children.

Executive Director of Visit Oxford, Kinney Ferris stated, “Because the festival is free and there’s not one ‘entrance’ location, it’s nearly impossible to determine an accurate number of attendees. Based on all of the data we’ve gathered so far, we estimate that over 112,000 people came to the Square during the two-day event.”

The staff is still processing data from merchandise sales, hotel data, as well as information from vendors and local merchants.

“I’m not much of a crier but I cried Friday night standing and watching Brett Young perform and seeing the crowds packed in and loving every minute,” said Mayor Robyn Tannehill. “I cried thinking about our very first festival. I cried thinking about how incredibly grateful I am that Visit Oxford directors have loved this festival and grown it to the amazing event it is today.

“I cried seeing what a beautiful community we live in and call home … and how many people were there to celebrate. As I walked around Saturday morning before the festival started and thanked the art vendors and told them, ‘Happy Double Decker,’ I realized that it is my very favorite holiday.”

North Lamar was shut down early Friday morning to install the largest stage that the festival has had, as well as the largest sponsor tent in the festival’s history. Music started Friday night with Memphis-based, The Wilkins Sisters followed by Virginia natives, 49 Winchester. The largest crowd draw came from former Ole Miss baseball pitcher turned country superstar, Brett Young. Initial numbers estimate that Friday night’s crowd far exceeded any expectations and was at least 20,000 attendees.

Early Saturday morning, the rest of the Square was shut down to vehicular traffic as over 150 art vendors loaded in to set up their booths. As the festival officially opened at 10 a.m., people filed in from all over. More than 35 states were represented in data collected by festival organizers as people traveled from all over the country.

Oklahoma art vendor Robert Linn said, “The Double Decker Arts Festival is the best-run festival I have ever attended. From start to finish, it is a well-oiled machine and the team has it so organized that it just makes it so easy for myself and other vendors.”

“Such a phenomenal crowd,” said art vendor Melonie McCarley Counce. “Best Double Decker Ever! As an art vendor, I cannot thank you enough for hosting such a great event.”

Additional features that added to the success of this year’s event included the Blue Delta Blues Alley that featured performances by blues artists from noon until 6pm.

“Our 2nd Annual Blue Delta Blues Alley was an even greater success than we imagined, thanks to our incredible community,” said Ferris. “Ole Miss coaches/staff and our friends and family from near and far made an effort to come out and celebrate with us, and we couldn’t be more grateful. We are excited for next year and are already planning for the masses.”

Also, a live mural was created on North Lamar by visual artist Tyler Key. Key started on the mural Friday morning that eventually revealed itself to be an image of Double Decker performer, Mavis Staples and the iconic red Double Decker bus that is the namesake of the festival. Attendees were encouraged to take photos in front of the mural that was lit by blacklights.

“This was my 25th Double Decker as an Oxonian and my 22nd as a business owner,” Ann-Marie Gordon, owner of Cicada. “When I tell people about those first few years, it’s amazing to think how far the festival has come. I am grateful for all the hard work our city puts into the festival year after year. As a business owner, it has such a positive impact on Cicada and as a local, who could ask for a more fun weekend. Double Decker allows this town, our locally owned restaurants, and small businesses a time to shine. I can’t wait to see what is in store for us next year and the years to come.”

Lyn Roberts of Square Books said, “Congratulations and thanks for all of your hard work in this year’s Double Decker Festival!”

Music began at 11am with hometown alternative folk band, Happy Landing. The local band recently released their first self-titled EP and were thrilled to join the ranks of such legends on the Double Decker stage. Blues artist Buffalo Nichols showed off his guitar skills and his singing chops at 12:30pm. Maggie Rose performed at 2pm reveling in the fact that she was finally performing on the Double Decker stage.

Rose told the crowd, “I was scheduled to perform in 2020, then 2021, and now the wait is over so I’m so
happy to be with you guys in Oxford, Mississippi. Hotty Toddy, y’all!”

Samantha Fish, a singer/songwriter/guitarist was featured as #7 in Guitar World’s “30 best guitarists in the world” performed at 3:30pm. A legend in her one right, Mavis Staples who is both a Blues and a Rock & Roll Hall of Fame-winner, took the stage at 5pm to a crowd that seemed to swell as she performed one of her top hits, “I’ll Take You There.” Jazz superstar Trombone Shorty & Orleans Avenue took the stage at 6:30 p.m. and did not disappoint.

One festival-goer commented, “Trombone Shorty just burned Oxford to the ground with that performance!” The final performance of the night was chart-topping rock band, The Revivalists.

“I was just so excited to actually be able to have the festival after canceling and rescheduling for two
years,” said Ferris. “It was so satisfying to have everyone back and thrilled to see the crowds that we had. I got
emotional Friday night seeing the amount of people that came out for the music. You plan this event for
an entire year, or in this case for three years, and you don’t know what the turnout will be, so it was just
so rewarding to see that people responded to what we planned.”

When asked about the future of Double Decker, Stubbs said, “We made notes on things that we can do better in the future. We have already started planning for next year and are excited to announce that the 26th Annual Double Decker Arts Festival will take place April 28-29, 2023.”