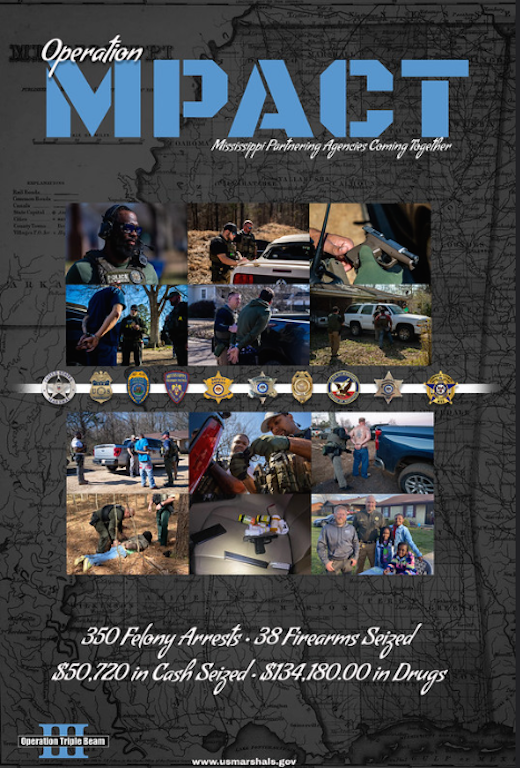 A month long joint federal, state and local law enforcement initiative organized in response to an increase in violent crime in the area has resulted in the arrests of more than 700 individuals in North Mississippi on a variety of charges including homicide, aggravated assault, aggravated domestic assault, child abuse, child sexual assault, drug distribution, unlawful gun crime, DUI, and failure to register as a sex offender.

In addition to the 700 arrests for felony and misdemeanor offenses, Operation MPACT resulted in the seizure of $134,180 worth of narcotics, $50,720 worth of cash, and 38 firearms.

Operation MPACT was organized in response to an increase in crime in the participating areas in recent months after several organized criminal groups operating out of Memphis and Chicago migrated to Mississippi via Interstate 55.

The operation commenced on March 1 in Panola County led by the U.S. Marshal Service’s Gulf Coast Regional Task Force with assistance from Sheriff Shane Phelps and members of his Department before moving to Grenada County on March 7 where Sheriff Rolando Fair and his Department assisted federal and state partners.  On March 14, the Operation moved to Lee County, where Sheriff Jim Johnson and Tupelo Police Chief John Quaka and their departments played key roles in the operation.

Operation MPACT finished at the end of March in Lowndes County with assistance from Sheriff Eddie Hawkins and his Department.