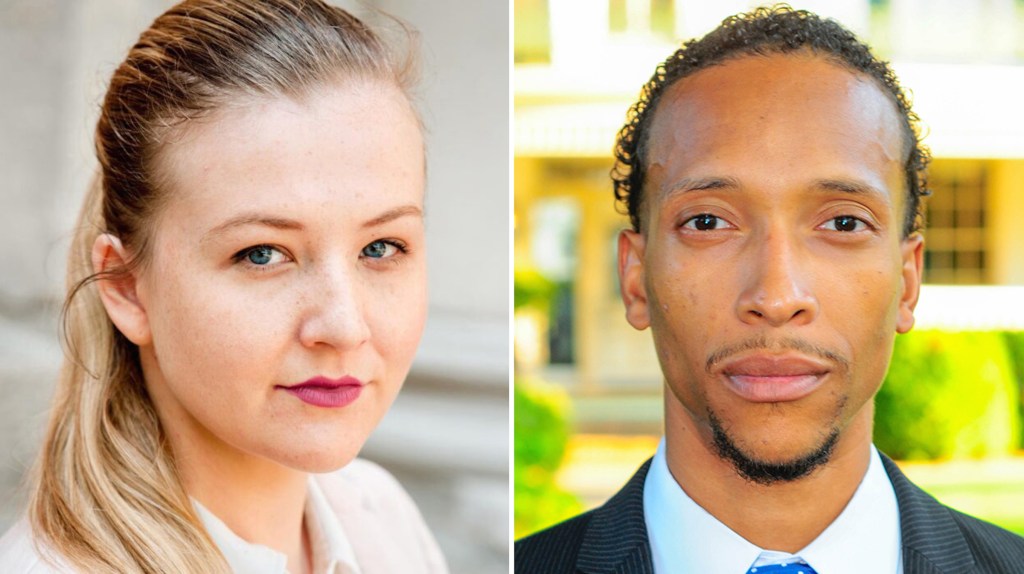 Eden Tanner (left) and Norris 'EJ' Edney are this year's recipients of the Frist Student Service Award at the University of Mississippi. Submitted photo

Two University of Mississippi employees who have demonstrated dedication and passion for helping students succeed have been honored with a campus-wide award for student service.

Norris “EJ” Edney, assistant vice chancellor for diversity and inclusion, and Eden Tanner, assistant professor of chemistry and biochemistry, have been selected as this year’s Frist Student Service Award honorees.

“As one of the highest honors on our campus, it is not surprising that EJ Edney and Eden Tanner were selected as this year’s Frist Award winners,” Chancellor Glenn Boyce said. “These deserving recipients embody and exemplify the caring nature of our campus community.

“I commend and thank them for their extraordinary and sincere focus on upholding our universitywide commitment to serving and supporting our students.”

Any full-time faculty or staff member, except previous winners, is eligible for the award, which includes a $1,000 prize and a plaque. The honorees also will be recognized during the end-of-the-semester faculty meeting on Friday (May 6).

In one nomination letter, a student credited Edney with mentoring and holding him accountable for his own success as a student.

“Growing up with no male figure in my life was complicated,” the student wrote. “I never knew how to interact with men, to be frank. Dr. Norris ‘EJ’ Edney is the first male figure to be 100% vested in my success.”

Edney encouraged the student to become active in several campus organizations, all while keeping his coursework and grades as the top priority.

“I am forever grateful for Dr. Edney’s role in my life,” the student said. “His love and passion for students inspired me to pursue higher education.

“I want to be the Dr. EJ to another student, hoping that they will also pay it forward.”

Another nominator, a faculty member in the university’s Sally McDonnell Barksdale Honors College, echoed that theme, comparing Edney to “a stone thrown into a pond. His contributions ripple out from Oxford to the state to the nation.”

As a graduate student at UM, Edney helped create the university’s Center for Inclusion and Cross Cultural Engagement. When he finished his doctorate in higher education in 2019, he was named its director.

During his time at Ole Miss, he also has served as program coordinator for the Luckyday Scholarship Success Program and as a coordinator for National Pan-Hellenic Council. He moved into his current role earlier this year.

It is “surreal” to be awarded this honor, Edney said.

“I believe 100% that the University of Mississippi is its people, and they’re great people,” he said. “To be recognized among the best of them in terms of providing service to our students is really humbling.

“It’s a reminder that what we do for students is the central reason we’re here.”

The first person from his family to attend UM, Edney said his story is similar to that of many other Black Mississippians, who grew up hearing that they would be better served at other institutions of higher learning.

“Now, I’m part of rewriting the story of what it means to be a part of the University of Mississippi and expanding what that means for all people,” he said. “It’s part of how the university keeps getting better and better for everyone, and how we can make sure it provides opportunities for all Mississippians.”

Although she joined the faculty only 18 months ago, Tanner has drawn praise for encouraging diversity in her academic and research pursuits. Her laboratory group includes one postdoctoral scholar, six graduate students and 18 undergraduates, about 65% of whom are women or nonbinary people, and 40% are people of color.

“She goes out of her way to make her lab a safe space for students of all genders and sexualities and nationalities,” a student wrote in nominating Tanner. “She is a strong advocate for disabled students and equity for people of color.”

“I am both medically disabled as well as a person of color,” the student said. “When I became sick, she herself brought me to the hospital and took a significant portion of her time ensuring that I had time, access to care and supplies to recover.”

Tanner was seeing students during her office hours when the chancellor called to tell her about the award, she said.

“It was a big surprise, and I got to share the news with some of my students,” she said. “I’m deeply honored because student service is why I’m in this kind of work.

“Being able to work with students and provide an open door and opportunities for them is really at the core of our mission here.”

The Frist Award is the most cherished of the recognitions she has received, said Tanner, who joined the faculty after serving as a postdoctoral fellow at the University of Oxford in England and at Harvard University.

“I’m so privileged to have a group of bright, talented students to work with,” she said. “It’s an honor to be able to work with them. I’ve worked at some of the top institutions in the world throughout my training, and the students here are really unbeatable.”