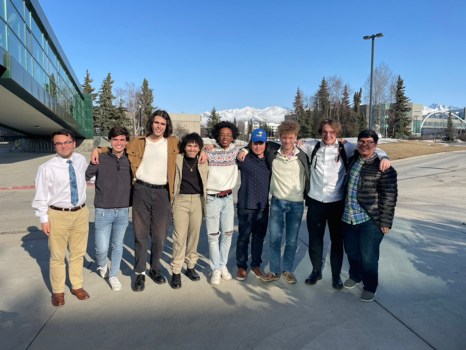 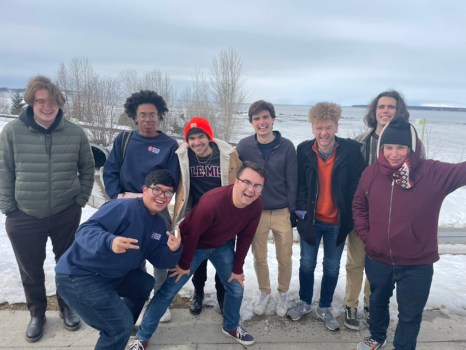 Members of the University of Mississippi's Warren Debate Union have fun in Alaska, where they traveled recently for the national debate championship. They are (front, from left) Mateos Lozano, James Hirsch and Ben Oakes, and (back, from left) Jacob Smith, Joseph Jiles, Andy Flores, Clark Etzel, Jacob Ratliff and Spencer Heitman. Submitted photo 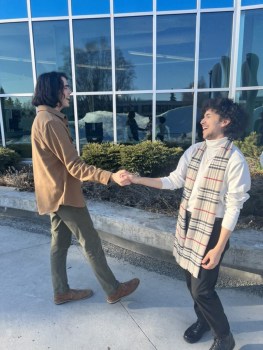 University of Mississippi juniors Spencer Heitman (left) and Andy Flores received two first-place rankings during preliminary debates to secure the seventh seed at the national championship tournament at the University of Alaska at Anchorage. They finished fourth in the competition behind teams from the U.S. Air Force Academy, University of Alaska and Regis University. Submitted photo

Members of the Warren Debate Union earned a Top 4 finalist finish at the league’s inaugural in-person competition. Last fall, a group of British Parliamentary debate coaches from across the country started a league for recurring online debate tournaments, to provide opportunities for student competition during the pandemic.

The team of juniors was Andy Flores, from Ocean Springs, also one of the university’s new Harry S. Truman Scholars, and Spencer Heitman, of Baton Rouge, Louisiana. Both students received two first-place rankings during the preliminary debates to secure the seventh seed at the tournament. They upset the third and sixth seeds in the semifinals to advance to the “grand final” round of the contest.

More than 40 teams representing a dozen universities competed in the tournament. Joining UM among the Top 4 were students from the U.S. Air Force Academy, University of Alaska and Regis University.

“Although Andy and Spencer were ultimately defeated by the national champion team from the Air Force Academy, their performance at the tournament was nothing short of excellent,” said Jacob Justice, assistant professor of speech communication, director of forensics in the Department of Writing and Rhetoric and the team’s faculty adviser.

Others UM students who competed were James Hirsch, a senior economics and public policy leadership major from Kansas City, Missouri; Jacob Ratliff, a master’s student in philosophy from Hattiesburg; Clark Etzel, a sophomore from Russellville, Arkansas; Ben Oakes, a senior from Madison; Jacob Smith, a freshman from Lacey, Washington; and Mateos Lozano, a freshman from Salinas, California.

Joseph Jiles, a freshman from Jackson, served as a judge at the tournament.

Competing in Alaska was a fantastic experience, Hirsch said.

“I was able to interact with a variety of perspectives from students coming from across the country to compete in an activity finding itself again after years of external and internal disruption,” he said. “The tournament in Alaska showed some of the best of debate, ranging from a tournament willing to test norms to improve equity and access in the activity to some of the highest-level competition I’ve had the opportunity to see in person.

“I am so thankful for all that debate has given me, and this trip to Anchorage was the cherry on top.”

The tournament concluded an impressive year of competition for the WDU. Over the course of the 2021-22 season, WDU students earned a Top 4 finalist finish at four different debate tournaments.

Even more impressively, each of these Top 4 finishes were earned by four unique combinations of Ole Miss students.