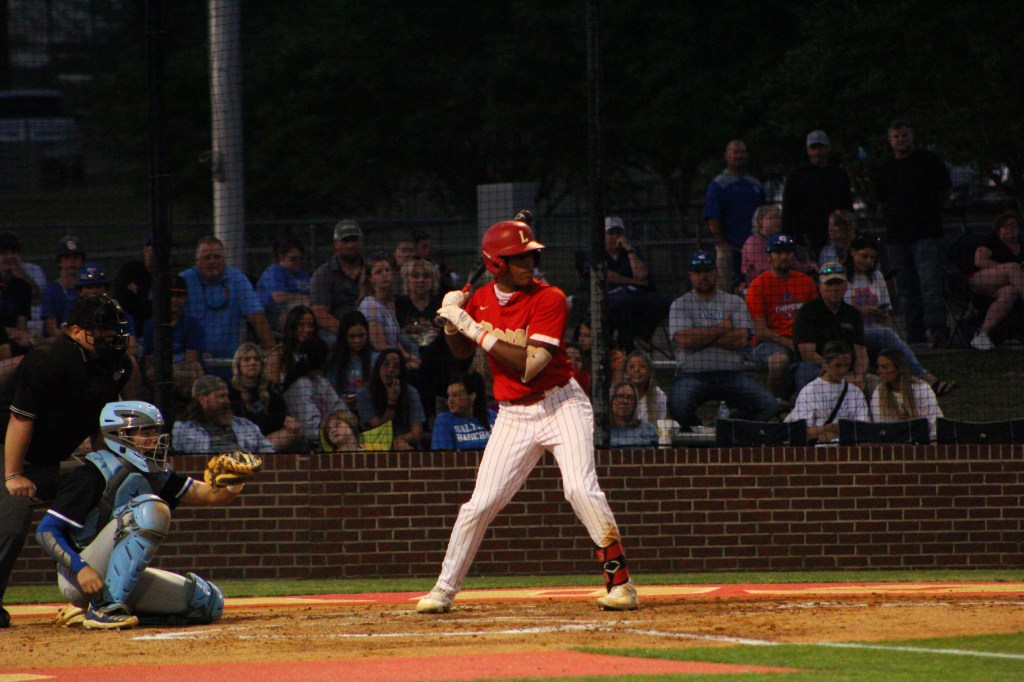 Lafayette's Tyrus Williams awaits a pitch in the Commodores' 6-4 loss to Saltillo in the second round of the MHSAA Class 5A playoffs on Friday, Apr. 30, 2022. (Grant Kelley/Commodore Media Group)

SALTILLO, MISS — Lafayette baseball saw their state title hopes evaporate before their eyes this weekend as they were bounced from the playoffs by rival Saltillo for the second consecutive season.

The Commodores dropped back-to-back games against their former regional rivals, losing 6-4 on Friday night before falling 6-5 on Saturday as the Tigers walked it off with an infield single.

They did not receive much production on the mound, as neither Radley Hill nor Everett Thompson appeared to have their best stuff when the team needed it most.

Hill lasted just three innings in the loss on Friday, giving up three runs on four hits including a two-run home run from Evan McCarthy in the top of the third that pushed the Tigers’ lead to 3-0.

He was relieved in favor of Logan Williams, who threw just two innings before giving up three runs in the fifth as the Commodores fell behind 6-0.

“Radley didn’t have a great night, had a tough time finding his stuff,” said Walker. “He’s a four-pitch guy, and he needs three of the four pretty much every night out. Tonight I think he didn’t have many, if any at all.”

Thompson fared better on Saturday, but was chased out of the game with no outs in the seventh after giving up four runs on six hits. He gave up a two-run blast to McCarthy in the bottom of the first that put Saltillo up 2-0 before the Commodores answered back with three in the second to take their first lead of the series.

Lafayette took a 4-3 lead in the sixth after McCarthy drove in the tying run with an RBI single in the third, and added another in the top of the seventh on an RBI single from Brody Breithaupt that made it a 5-3 ballgame.

Saltillo cut the lead to one on an RBI single by Matthew Roncalli before Drake Douglas stepped to the plate with runners on second and third and two outs.

The junior hit a high chopper over the head of pitcher Noah Robinson, and narrowly beat out the throw to first as the tying run crossed the plate. McCarthy, the runner on second, got a huge jump on the play and never hesitated as he took a wide turn around third and darted for home. The senior slid in just before the tag, popping up immediately as his teammates swarmed him in celebration along the first base line.

The Commodores fell to Saltillo in the playoffs for the second consecutive season after losing to the Tigers in the North Half final last year.

“We didn’t do the little things to win, plain and simple,” Walker said. “We just didn’t make the plays that we needed to make, the championship-level plays you need to make to win this kind of ballgame.”

Lafayette finishes their season with an 18-9 record, and now turns their attention to next season when they will return six of their nine regular starters.