Oxford cruises past Center Hill to reach North Half semis 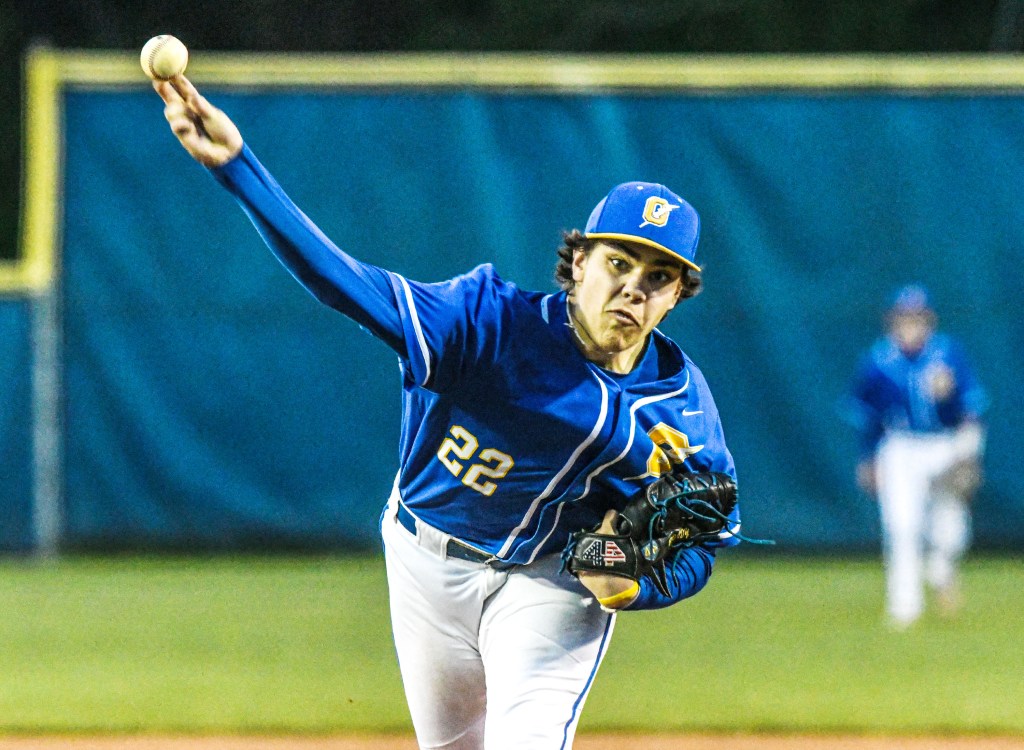 Oxford High’s Brady Stinnett pitches against Tupelo in the Chargers' 13-4 victory over the Golden Wave at Edwin Moak Field in Oxford, Miss., Thursday, April 7, 2022. Oxford beat Center Hill in two games this weekend to advance to the North Half semifinals. (©Bruce Newman)

OLIVE BRANCH, MISS —  Oxford baseball coasted past Center Hill in two games in the second round of the MHSAA Class 6A playoffs this weekend, defeating the Mustangs 6-2 in game one on Friday and 17-4 in game two on Saturday to reach the North Half semifinals.

Oxford struggled to get quality at-bats against Center Hill starter Collin Clark in game one, but took advantage of some early defensive miscues to jump out to a 5-0 lead after the first two innings.

They scored three runs in the first after first baseman reached on an error with two outs that extended the inning before right-fielder Thomas Rayburn capitalized with a two-out single that gave them a 3-0 lead.

Starter Dixon Webb was electric on the mound, tossing a complete game while allowing just two runs on four hits. He pounded the strike zone all night, throwing just eight balls in seven innings and conceding no walks.

The Mustangs were barely able to touch the Chargers’ senior ace throughout the game. They scored a run in the third on an RBI groundout after third baseman Logan Esfield reached on an error to start the inning, and another in the seventh on a solo home run from second baseman Scott Green, but registered just three other baserunners as Webb mowed through the lineup turn after turn.

The offense came alive for Oxford in game two on Saturday afternoon as the Chargers rode a 10-run third inning to a 17-4 run-rule victory.

Four players recorded multiple hits on the afternoon, including table-setters Campbell Smithwick and Ty Wicker. Smithwick went 2-for-3 from the leadoff spot with two doubles, three runs scored and an RBI, while Wicker registered a pair of singles and three runs scored.

Rayburn, pitcher Brady Stinnett and designated hitter Jack Harper all left the yard in the blowout win, combining for nine RBIs themselves as the Chargers jumped all over Center Hill starter Landon Scruggs. Harper’s three-run shot in the third inning marked the first varsity home run of his career as the junior broke out with a 2-for-4 performance in the series.

Pitcher Brady Stinnett settled in on the mound after giving up three runs in the second, allowing just one hit over the final three innings as he went the distance in the five-inning contest. The sophomore gave up three earned runs on six hits while also posting a 1-for-2 line at the plate with three runs scored and three RBIs.

First-year head coach Cade Hoggard’s squad now awaits the winner of Monday night’s game three between Germantown and Hernando. The Mavericks beat the Tigers 3-2 on Monday night before Hernando came back with an 8-3 victory on Saturday to force game three.

The Chargers will host the first game of the series on Friday at Edwin Moak Field on the Oxford Middle School campus.