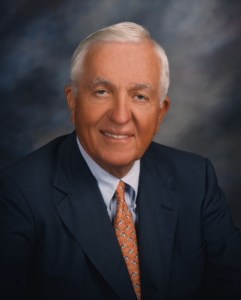 Writ Adams Yerger Jr., of Jackson, MS passed away peacefully at home Monday, May 2, 2022.
A native of Jackson, Wirt was born March 18, 1930, the son of the late Rivers Applewhite Yerger and Wirt Adams Yerger. He was educated in the Jackson Public Schools and became an Eagle Scout at age fifteen. Wirt received a Bachelor of Business Administration degree from the University of Mississippi, where he was a member of Kappa Alpha fraternity. From 1952 to 1954 he served as First Lieutenant in the U.S. Air Force’s Strategic Air Command. In 1956, he married Mary Polk Montague of Hattiesburg.
In 1954 Wirt joined Ross & Yerger, Inc., Mississippi’s first insurance agency, founded in 1860. During his forty-eight years of leadership, the agency grew from three employees to fifty-three. In February 2002, Ross & Yerger became employee-owned, and Wirt continued to serve as Chairman Emeritus. He was the first insurance agent in Mississippi to hold both the CPCU and CLU designations and was the first Mississippian invited to be an underwriting Name at Lloyd’s of London. He also served as President of the Mississippi Association of Insurance Agents.
Wirt gave unselfishly and generously to his community. He was a past president of Metropolitan Boys Club, Metropolitan YMCA and Jackson Rotary Club. He received the Jackson Junior Chamber of Commerce Distinguished Service Award in 1956 and 1960. He founded both the Metropolitan Crime Commission and Fondren Renaissance Foundation. He was a former director of the Jackson Chamber of Commerce, the Mississippi Insurance Council, and the Community Foundation for Mississippi, establishing one of their first donor advised funds. He was a founding trustee of Jackson Preparatory School and a member of First Presbyterian Church, where he served as a Deacon.
Wirt was the leader in establishing the Republican Party in Mississippi; serving as State Chairman of the Mississippi Republican Party from 1956 until 1966. He was also Chairman of the Southern Association of Republican State Chairmen. In May, 2009 he was honored as Mississippi Republican Party Chairman Emeritus for his work in building a two-party political system in Mississippi. He ended his speech with these words, “The best advice I give to you is always choose principles over pragmatism and power. Standing on principles is not easy, you get tired and discouraged, but the satisfaction of accomplishing all you can for a better nation is worth it all.”
Wirt’s greatest reward in his life was being a husband, father, grandfather, great-grandfather and brother. He built special and ever-lasting relationships with each member of his family throughout their lives. Wirt unselfishly gave of his time, talents, resources and love, not only to his family, but to many friends in all walks of life.
He is survived by his wife Mary Montague Yerger of Jackson, Mississippi; son Wirt Adams Yerger III and his wife Linda Biggers Yerger of Ridgeland, Mississippi; daughter Mary Yerger Dunbar and her husband Thomas Tarver Dunbar of Jackson, Mississippi; son Frank Montague Yerger and his wife Jane Prater Yerger of Oxford, Mississippi; granddaughters Mary Montague Dunbar and Sarah Jane Rivers Yerger; grandsons Wirt Adams Yerger IV and his wife Jordan Jones Yerger, James David Yerger and his wife Natalie Sink Yerger, Richard Montague Yerger and his wife Rachael Hardin Yerger, John Taylor Yerger and his wife Lauren Meyer Yerger, Thomas Yerger Dunbar, Wirt Yerger Dunbar, Frank Montague Yerger, Jr. and Harlan Prater Yerger, his great-grandchildren Jane Ellen Yerger, Anny Elizabeth Yerger, Mary Adams Yerger, Richard Montague Yerger, Jr., William Hardin Yerger, John Taylor Yerger, Jr., Anna Gray Yerger, Ellen Gray Yerger, his brother William Swan Yerger and his wife Gingia Palmer Yerger, his brother Ivan Bass Yerger and his wife Sandra Pate Yerger, his sister Rivers Yerger Lurate and several nieces and nephews. In addition to his parents, Wirt was pre-deceased by his in-laws, Ida Lois Polk and Frank Douglas Montague, Mary Dixon and Frank Douglas Montague, Jr. and Lynn Williams and Richard Abner Montague.
The family wishes to thank Sarah Robinson, Peggy Wilson, Tena Jenkins, Lola Walker, Katrina Rogers, Gladys Townsend and Anthony Langston for their untiring love and care.
Visitation will be in Miller Hall at First Presbyterian Church on Tuesday, May 3rd from 3:30-6:00 p.m. A family burial service will be at Greenwood Cemetery on Wednesday, May 4th at 10:00 a.m., followed by a memorial service at 11:00 a.m. at First Presbyterian Church.
His grandsons will serve as pallbearers.
In lieu of flowers, memorials may be made to: First Presbyterian Church- 1390 North State Street, Jackson, MS 39202; French Camp Academy- One Fine Place, French Camp, MS 39745; Revitalize Mississippi- 210 E. Capitol Street, Suite 1215, Jackson, MS 39201; or to a charity of choice.