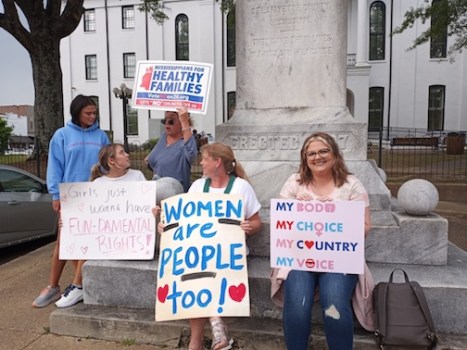 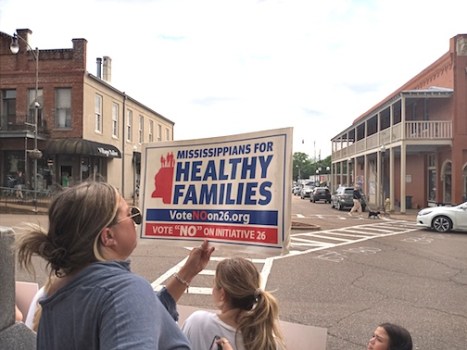 Protestor Jewel Barlow holds up a sign at a protest on Tuesday evening a day after a draft opinion suggesting the Supreme Court would overturn Roe v. Wade. (Photo: Maya Martin/The Oxford Eagle) 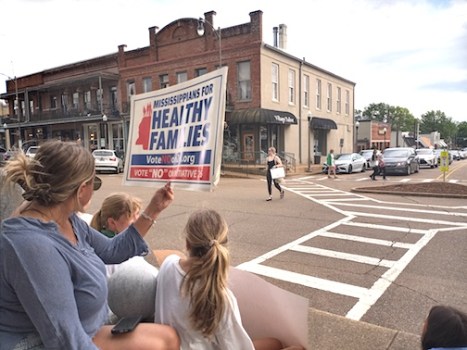 Protestor Jewel Barlow holds up a sign at a protest on Tuesday evening a day after a draft opinion suggesting the Supreme Court would overturn Roe v. Wade leaked to the public. (Photo: Maya Martin/The Oxford Eagle)

OXFORD, Miss. — A small group of women sat on the Confederate monument at the Lafayette County Courthouse Tuesday evening in support of abortion and reproductive rights.

They held up signs reading, “My Body, My Choice, My Country, My Voice,” “Girls Just Want To Have Fun-demental Rights” and “Women Are People Too” as cars passed by in the courthouse square’s roundabout. Every so often drivers yelled out their support for their pro-choice message or heckled them with demeaning language.

The mini-protest was a quickly organized event in response to the leak of a draft Supreme Court opinion suggesting the court is ready to overturn the 1973 Roe v. Wade decision, a landmark case that legalized abortion across the nation.

On Monday night, news of the leak sent a shockwave rippling through the nation. For anti-abortion advocates, the news was a breath of fresh air.

For pro-choice and reproductive rights activists, the news was devastating.

“It’s horrifying and upsetting,” said Cristen Hemmins. “It’ll hurt black and brown women and poor women the most. People with money can get to other states, but people without— which is a lot of people in Mississippi— will have no options.”

Hemmins is on the board of the Mississippi American Civil Liberties Union and Planned Parenthood of Tennessee and North Mississippi. She has fought for reproductive and women’s rights for years. The sign she held Tuesday was from the 2011 campaign against Mississippi’s Personhood Amendment, a constitutional amendment that would have recognized a fertilized human egg as a person.

“I’ve held on to it because I’ve needed it since then multiple times,” said Hemmins.

The amendment was struck down by a 17-point margin, but 11 years later the decision may be out of the hands of voters as the Supreme Court moves to take the issue upon themselves.

“Not everybody has access to medical abortion,” Hemmins said. “It’s safer to get an abortion than to carry a pregnancy, especially in Mississippi which has the highest infant mortality rates and maternal death rates in the nation.”

Studies from the Centers for Disease Control and Prevention support Hemmins’s statement. In a 2019 report on Infant Mortality in the United States, the CDC reported 8.71 infant deaths per 1,000 births in Mississippi.

Mississippi is one of the poorest states, and people in low-wage jobs often don’t receive health insurance. Women can enroll in Medicaid during pregnancy, but that coverage disappears soon after they give birth. Across the country, U.S. Census Bureau information shows fewer Black and Hispanic women have health insurance, especially in states with tighter abortion restrictions.

The small group of protestors on the Square asserted that women should have access to abortion no matter what state they are in.

“People want to see this as pro-life but it’s not. It’s pro-choice,” said Jewel Barlow, a protestor. “It’s giving women the decision to choose what they want to do, whether they want to have a child or whether they don’t for whatever reason it may be—whether it’s for their financials or if it’s not safe for them. By taking this away it’s taking away women’s choices in general.”

Although many across the nation are fighting and protesting against the leak, to some activists, it seems like it’s too late.

“I don’t have a lot of hope that we can sway the Supreme Court’s decision at this point,” said Hemmins. “I think a lot of people will have to suffer before people realize what a terrible mistake appealing Roe is and I really hate that. People are going to die because of this and Mississippians and people nationwide should care.”