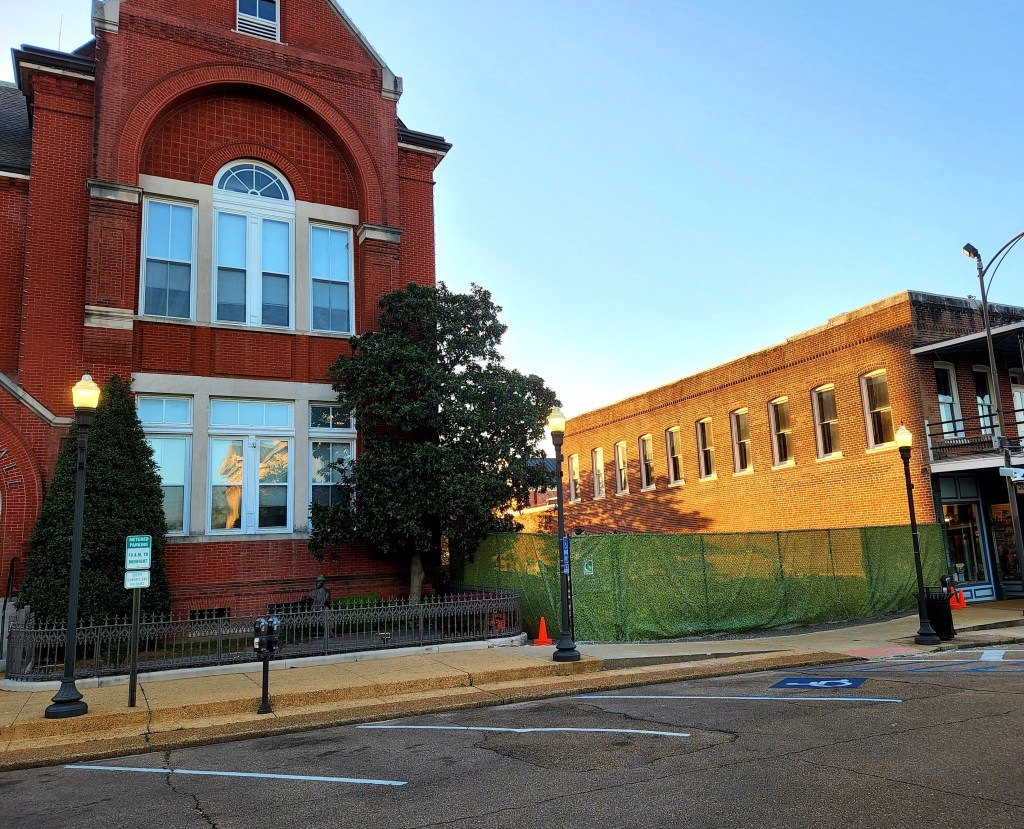 Commissioners and staff reviewed plans for the pocket park at 107 Courthouse Square to consider building materials and the park’s design as part of the streetscape. Proposed and announced in early 2021, the park will provide nearly 7,500 square feet of green space and provide a path from the Square to the parking lot located behind City Hall.

“The original goal of the project was to create a comfortably sloped, winding path that connected the Square to the parking lot behind City Hall,” said Special Projects Director Mark Levy. “We wanted to accommodate [Americans with Disabilities Act regulations] without the use of a lot of railing.”

Six steps were added to the east side where the parking lot meets the property and moved the proposed ADA ramp to behind City Hall to give disabled persons access to the Courthouse through the park.

Concept designs also show a relatively flat area along the pathway that will encourage different types of activities.

“We moved the flat area that served at the stage — we’re not really calling it a stage but it could serve as a stage— to the front,” Levy said. According to him, it would serve more as an elevated podium as the size of the “stage” cannot fit a large group. “We were asked to do that and it makes sense because if there is a crowd, it could ease out into the street.”

The proposed changes also include seat walls throughout the park, public Wi-Fi and electrical outlets creating a space for residents to work, play or simply enjoy their afternoons.

“Generally speaking the space will look similar or at least be consistent with the work done on East Jackson last summer,” said Levy in reference to East Jackson Streetscape project. “We’re proud of how that turned out and we expect similar results in this park.”

When news of the demolition was first announced, community members worried over the time capsule placed in the former courtyard. The capsule was planted July 4, 1976 by a 6th-grade class and is scheduled to be opened on July 4, 2076.

Levy mentioned at the meeting that the capsule was secured during the demolition.

“We were able to save the time capsule and the plaque that sat behind the time capsule there sitting in the back parking lot,” said Levy. He made no mention of where the capsule was stored currently.

The Courthouse Square Preservation Commission unanimously approved the design changes to the park.

The construction bids will be opened in a week and a half to two weeks from now, according to Levy. Once bids are gathered, the staff will come before the Board of Aldermen to award a bid. The city plans for the park to be completed by September of this year.