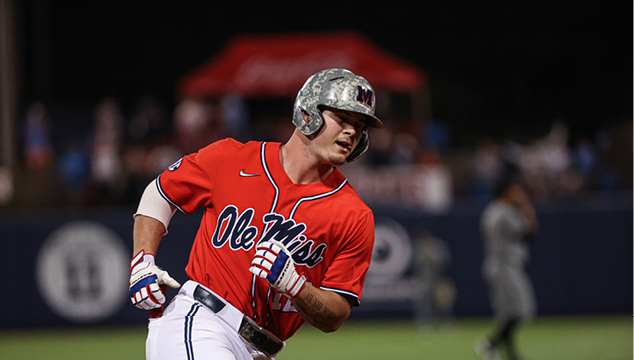 Ole Miss designated hitter Kemp Alderman lifted the Rebels over Missouri with a 4-for-4 performance as he fell a triple shy of the cycle on Friday, May 6, 2022. (Josh McCoy/Ole Miss Athletics)

OXFORD, MISS — “I just told myself I’m going to go up there and just try to do whatever it takes to help my team win.”

Ole Miss sophomore designated hitter Kemp Alderman put the team on his back Friday night, guiding the Rebels to a 7-5 victory over Missouri in the first game of a series that will go a long way towards deciding which of these two teams makes it to Hoover.

Alderman went 4-for-4 in the victory, falling a triple shy of the cycle as he drove in three runs while crossing the plate once himself.

The young slugger tied the game with an RBI double in the bottom of the first that made it a 2-2 ballgame before outfielder T.J. McCants drove in another run on a sacrifice fly one play later.

Alderman extended the Rebels’ lead in the third with a single that allowed first baseman Tim Elko to score after a throwing error by Missouri’s Ross Lovich. The Tigers narrowed the gap back to one in the top of the fifth before Alderman struck again, launching a solo shot over the wall in left-center to put Ole Miss up 5-3.

The Decatur, Miss. native recorded the first four-hit night of his collegiate career when the Rebels needed it most—with their backs against the wall and a trip to Hoover hanging in the balance.

Ole Miss now sits one game above Missouri in the SEC standings with eight conference games remaining. They are tied with Kentucky at 8-14 in conference play, but hold the tiebreaker with the Wildcats after taking two out of three from them on the road in Lexington earlier this season.

“I know it sounds like a broken record, you say, ‘Hey what do you need to do?’ And we keep saying the same thing. But it’s the truth. It’s not some super invention. It’s, ‘You have to play better.’ How do you play better? You have to make some plays,” said head coach Mike Bianco. “That’s how you win games in our league and I thought that was the difference tonight.”

The Rebels square off with Missouri in game two of the series at 6 p.m. on Saturday. The game will be available on SECN+ and the Ole Miss Radio Network.