They Came From The Walls: Woman finds thousands of bees in her apartment walls 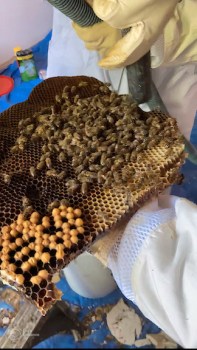 Alexa Lee, resident of The Links at Oxford, had her world shaken when she discovered thousands of bees living within her walls. According to Lee, evidence showed that the bees have resided within for years. (Photo: Alexa Lee)

It’s an everyday occurrence to deal with a wayward fly or mosquito buzzing around your room. However, Alexa Lee found a much bigger problem: thousands of bees within the walls and ceiling of her apartment bedroom.

Lee moved to Oxford from Georgia in February to join her mother.

A couple of months after moving in, Lee noticed bees hovering in one spot just outside her apartment unit. “I didn’t think it was something big,” she said. “Just probably a small hive or something.”

It was important for Lee to be aware of insects, especially bees, as she is severely allergic to insect bites and stings which could send her into anaphylaxis. She said she carries an EpiPen with her at all times and avoids outdoor activities.

Lee said she promptly notified the front office and they sent maintenance with beekeepers to her unit to address the issue. During this time, Lee was hosting her brother who had come to visit.  And he made an interesting discovery in one of the bedrooms.

“As soon as I put in my request for maintenance to come with the beekeeper, my brother comes out of the room and says, ‘I hear buzzing in the wall by the outlet,'” Lee said.

Lee went to investigate her brother’s claim and heard the same buzzing in the right wall of the apartment’s second bedroom.

They discovered dead bees on the floor by a power outlet and concluded that’s how the bees were getting through.

Lee met with maintenance representatives and the beekeeper, who were scheduled to remove the bees entirely on April 26.

According to Lee, the front office employee said the plan was to break a hole in the ceiling and the walls and remove the bees.

“I didn’t anticipate what I saw,” Lee said.

Lee was not in the room while the beekeeper and his associates worked. For the 45 minutes they were in the room, Lee said all she could hear was vacuuming through the closed door.

“So they come out of the room and I’m thinking, ‘That was fast so it wasn’t that big of a problem,'” she said. “But one of the guys comes out of the room and when I asked him if it was a lot, he just looked at me — his eyes were big— and said, ‘There were tens of thousands of them.'”

The beekeepers videoed and photographed the evidence of what they discovered within Lee’s walls, and evidence suggested it was a problem years in the making. Rows and rows of old honeycomb shrunken and browned with age were clinging to the ceiling. In photos taken by the beekeepers, what can be mistaken as debris from the torn ceiling is actually hundreds of bees along the floor and window.

After reviewing the photos and footage from the removal process and overcoming the initial shock, Lee realized maintenance and the beekeeper never tore down the wall where the bees were originally discovered.

“They just tore the hole in the ceiling and got what they saw out,” said Lee.

The plan to address one small problem became multiple problems that were never resolved, she said. “That honeycomb is all over that room and possibly in that building,” said Lee. “And I know it’s in that wall because if the bees got through the hole by the window and they were able to travel to the whole other side of the room, who’s to say that there’s nothing there?”

Lee said she found no help from front office management.

A representative for the Links declined to comment on the situation.

“They were very nonchalant and said that they addressed the situation and got the bees out,” she said. “But who’s to say that they got all the bees? I’m surprised I didn’t get stung and I’m grateful. I’m scared, and I’m kind of losing my mind because I didn’t expect to see all that.”

Lee is ready to leave The Links at Oxford behind. Unable to break her lease, she has asked to be relocated with no resolution.

Lee is currently staying with her mother and said she has been unable to work due to the stress.

“I haven’t been able to work because my mind’s been focused on if I need to start over,” she said.

Although Lee is not happy with the way The Links has responded to her predicament, she said her focus is on bringing awareness to the problem for other tenants.

“The bee problem could be a problem that’s in the whole building. There are children that live in that building and other families. They’ve only just scratched the surface.”