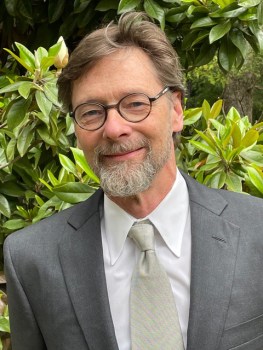 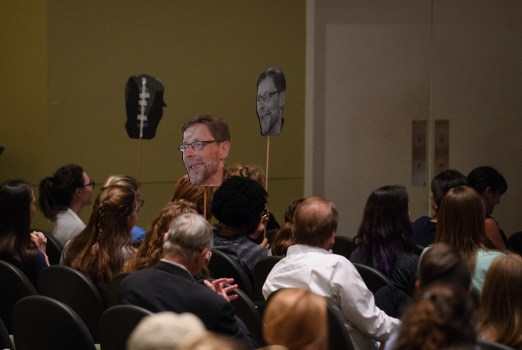 Ken Sufka is among the University of Mississippi's most popular classroom teachers, as evidenced by the photos of him dotting the audience when he gave the 2017 Last Lecture, the final lecture of the academic year. Photo by Thomas Graning/Ole Miss Digital Imaging Services 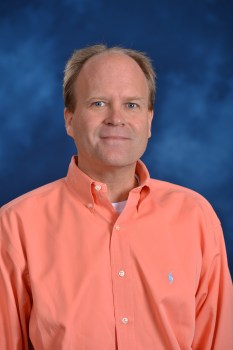 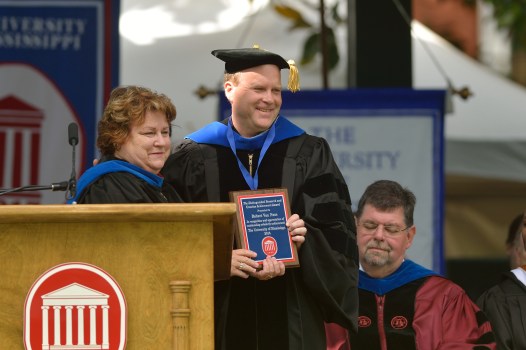 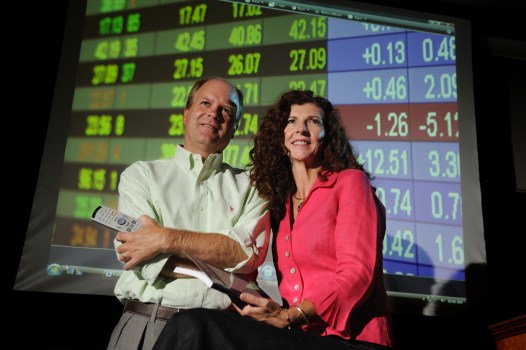 Two respected University of Mississippi professors with a combined total of 50 years of teaching, research and service have been appointed Distinguished Professors by the university.

Kenneth J. Sufka, professor of psychology and pharmacology, and Robert Van Ness, holder of the Bruce Moore Chair in Finance, were appointed the honorific title Friday (May 6) during the spring faculty meeting.

Created in 2018, the Distinguished Professor title recognizes the best faculty members with sustained excellence at the university. The award was created in response to the university’s strategic initiative to develop a post-professorial recognition.

“The Distinguished Professor award recognizes people for having sustained careers of achievement that have had significant influence on their disciplines,” Provost Noel Wilkin said. “The two awardees this year, Dr. Sufka and Dr. Van Ness, are no exception.

“They both have had productive careers that have helped to transform their areas of research and have enhanced the educational experiences of their students.”

“Over the course of his career, he has produced an impressive body of work in the field of behavioral neuroscience and psychopharmacology, which has led to incredible breakthroughs in the treatment of depression, chronic pain and addiction,” ElSohly wrote in support of Sufka’s nomination. “Most notably, his research has led to the discovery the first and still only drug-efficacy screening procedure for treatment-resistant depression, for which he received a patent in 2015.”

Working with ElSohly and others, Sufka received a second patent in 2020 for a new cannabidiol analog that shows painkilling activity on par with opioids but without the side effect profile or abuse liability typical of this class of analgesics. This compound, which has the potential to address the current opioid abuse crisis, is licensed to a biotech company and is moving toward clinical trials.

“Dr. Sufka’s lab has developed an innovative method for quantifying analgesic drug effects in animal models of chronic pain that is now commonly used across major pain labs in the U.S. and abroad,” he said.

Sufka has frequently been ahead of his time, said Jeffrey Mogill, the E.P. Taylor Professor of Pain Studies at McGill University in Montreal, citing a 1994 study in which Sufka found that conditioned place preference could be used as an indirect measure of chronic pain for assessing potential analgesics.

“This idea was so far ahead of its time that the paper garnered only 17 citations in the first decade after its publication,” Mogill noted.

“In the last five years alone, Sufka, 1994 has been cited 40 times,” he continued. “I should point out that, at present, CPP is the most commonly used technique in the pain field for measuring spontaneous (or ongoing) chronic pain, and there is now wide agreement that this symptom of pain is the No. 1 priority of preclinical pain research.

“More and more people in the field are using a technique that Ken invented singlehandedly in 1994.”

Generally lauded as a talented, dedicated and effective teacher who is passionate about the success of students, Sufka is the first UM professor to be named a Case-Carnegie US Professor of the Year. His other awards include the 2006 Thomas F. Frist Student Service Award, 2005 Faculty Achievement Award and 1996 Elsie M. Hood Outstanding Teacher Award.

He has turned his passion for student success into a widely used book for undergraduates, “The A Game,” which is in its second edition and translated into Spanish and Arabic. With more than 250,000 copies in print, his book has been adopted by a number of colleges and universities for distribution to their freshman classes.

Van Ness came to UM in 2002 after serving on the faculty at Marshall University and Kansas State University.

Promoted to the rank of professor in 2009, he has held the Moore Chair since 2013. He co-edited, with Bonnie Van Ness, The Financial Review from 2009 through 2015. Widely recognized as one of the preeminent scholars in his field, his primary area of research examines financial markets and the trading of securities, commonly referred to as market microstructure research.

“His work has historically been excellent, and I have no doubt that his future work will continue to meet the very high standard he has set for himself,” wrote Michael Pagano, professor of finance at Villanova School of Business. “As his CV attests, Dr. Van Ness is an excellent teacher as well as scholar, having received numerous awards for both pedagogy and research.

“He has also given back to the profession as a successful editor of The Financial Review as well as serving as an associate editor at the Journal of Banking and Finance and other respected finance journals.

Van Ness’ expertise also was cited by other colleagues in support of his nomination.

“Within financial markets, market microstructure is how different trading mechanisms impact price formation and price discovery and how transaction costs affect investor behavior,” wrote Daniel Bradley, the Lykes Professor of Finance and Sustainability at the University of South Florida.

“Recently, the GameStop trading event in January 2021 highlighted the importance of this research area as payment for order flow was heavily debated across all mainstream media and ultimately led to Congressional hearings (the debate is still ongoing).

“When I think of market microstructure, the first person I think of is Dr. Van Ness. He has been and continues to be at the forefront of this area.”

One of the most prolific researchers and scholars in his field, Van Ness has published more than 100 peer-reviewed articles, has nearly 4,000 Google Scholar citations and received 10 best-paper awards at professional academic conferences, further indicating his standing as a researcher.

Primarily teaching MBA and doctoral-level courses, he has been highly regarded by students and has won teaching awards five times in the MBA program. The director of doctoral programs, Van Ness has provided mentoring to many doctoral students, chaired or co-chaired 18 dissertations and published with more than a dozen Ph.D. students since he came to Ole Miss.

No more than two eligible faculty can be appointed as Distinguished Professors in a given year.

Each school and college has its guidelines for nominations, but the university requires that nominated faculty have at least six years of service at the highest rank of professor, along with exemplary accomplishments in research and creative achievement, teaching and service. Also, it is expected that awardees will have achieved a significant degree of national or international recognition.