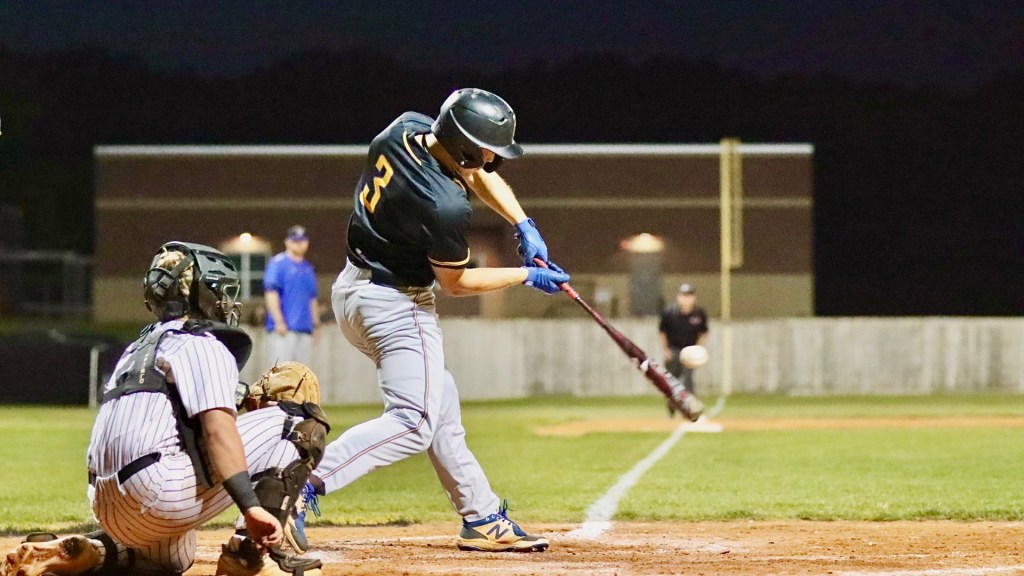 Oxford's Dixon Webb connects on an RBI single in the sixth inning of the Chargers' 10-3 win over Hernando in the quarterfinals of the MHSAA Class 6A playoffs on Sat., May 7, 2022. (Angel Smith)

HERNANDO, MISS — Nothing could go wrong for Oxford on Saturday as the Chargers cruised past Hernando to reach their first North Half championship series since 2018.

Head coach Cade Hoggard’s squad put a beatdown on the Tigers, exploding for 10 runs as sophomore righty Brady Stinnett kept a talented lineup in check with one of his best pitching performances of the season.

“I thought Brady pitched one of the best games he’s had in a couple weeks,” Hoggard said. “He’s been up-and-down but he competes every time he’s out there and we got one of his best tonight.”

Stinnett, who has struggled in recent weeks, pitched six complete innings to earn the win, giving up one earned run on three hits as he mowed through the Tigers’ lineup for three complete turns.

“The last couple weeks have been really rough so I talked to one of my brothers actually about mechanics and I fixed something mid-week in the bullpen and it just went my way,” Stinnett said.

The stellar performance came just a day after Chargers’ ace Dixon Webb threw a two-hit, six-inning gem in game one on Friday to put Oxford ahead in the series.

The Chargers held a talented Hernando lineup to just five hits between the two games, keeping the Tigers well below their season average of 8.2 runs per contest.

“There’s an old saying, ‘big-time players step up in big-time games’ and that’s what Dixon and Brady are. Brady’s young, Dixon’s been the front-line guy ever since he’s been out there, and when we needed them the most they stepped up,” Hoggard said.

“Five hits allowed against this team—they’ve been great all year and they barrel balls up—to allow two five hits in two games is pretty impressive and I think that’s all credit to our pitching staff,” catcher Campbell Smithwick said.

Oxford’s offense also answered the call in game two, breaking out for 10 runs after being held to three runs on three hits in game one on Friday.

Smithwick got the party going in the first inning, crushing a belt-high curveball deep over the wall in right for a leadoff blast that put the Chargers ahead after just three pitches.

“He did a good job getting ahead—fastball then changeup I believe—then he left a curveball over the middle,” said Smithwick. “That’s what our team’s been preaching all year is to battle with two strikes and I think we did a good job of that tonight.”

The Chargers added three more in the third on an RBI single from Stinnett followed by a two-run line-drive home run from first baseman Ben Goubeaux that came screaming off the bat at 97 m.p.h.

After designated hitter Jack Harper scored on a wild pitch in the next inning, Smithwick broke the game open with a two-RBI single that put Oxford up 7-0 in the middle innings.

Oxford cruised the rest of the way, coasting across the finish line with a 10-3 victory as they clinched a spot in the North Half championship series for the first time since 2018.

“I thought our guys competed their butts off—I mean they’ve done that ever since the Grenada series,” Hoggard said. “I’m super proud of the competitiveness that we had on the road.”

The Chargers will face off with a familiar foe in the next round in powerhouse DeSoto Central. The Jaguars knocked off Oxford in the playoffs in two straight seasons back in 2018 and 2019 en route to back-to-back state championships, and now the two sides will face off once again with a trip to the state title series on the line.

“I hope it’s a dogfight, I know our guys will be excited to play. They’re gonna be good—they’re always good—but these guys can battle with anybody,” said Hoggard.

Oxford will host game one of the series on Friday at 7 p.m. at Edwin Moak Field before traveling to Southaven for game two on Saturday. The series will return to Oxford for game three on Monday if necessary.