Ole Miss wraps up sweep of Missouri with blowout win 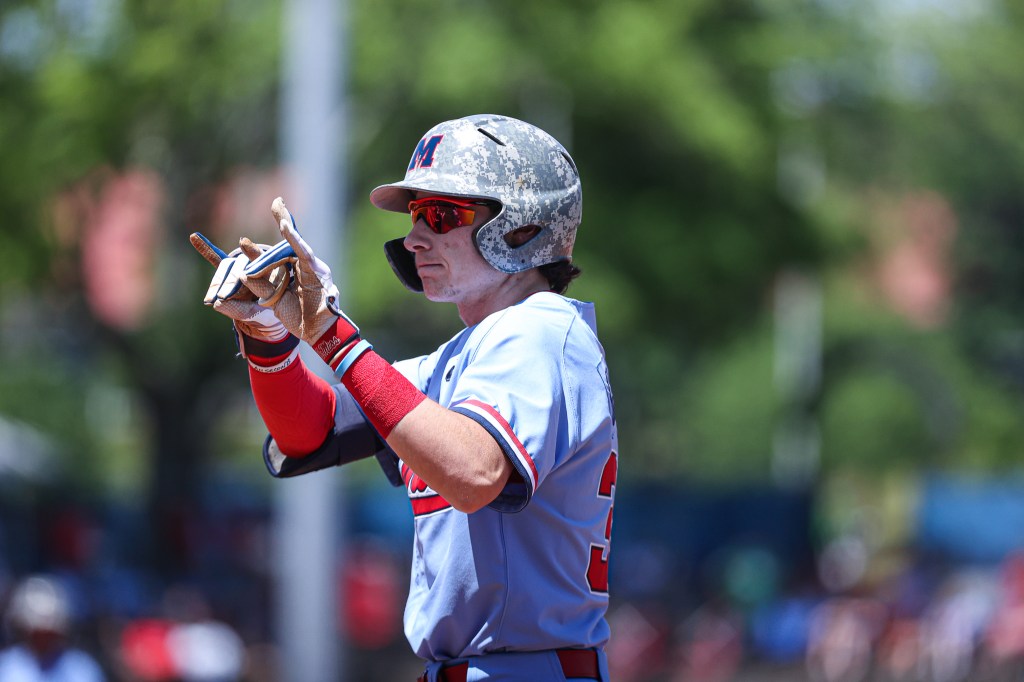 Ole Miss left fielder Kevin Graham celebrates after a single in the first inning of the Rebels' 9-0 win over Missouri on Sunday, May 8, 2022. Graham finished 5-for-5 on the afternoon with two home runs. (Josh McCoy/Ole Miss Athletics)

OXFORD, MISS — Ole Miss baseball secured a much-needed victory on Sunday as they defeated Missouri 10-2 to cap off their first sweep in conference play this season.

The Rebels (27-19, 10-14 SEC) entered the weekend tied with Kentucky and Missouri for last place in the conference standings, but put some distance between themselves and the conference’s bottom-dwellers with three straight wins against the Tigers.

The offense exploded for 10 runs in Sunday’s victory, their first double-digit scoring performance since plating 10 runs in an 12-10 loss to Alabama on Apr. 9.

The Rebels pushed across a pair in the first as Missouri starter Austin Marozas struggled to find the strike zone in the early goings. The Tigers’ junior righty allowed three straight singles to load the basses before a passed ball followed by a wild pitch allowed two unearned runs to cross the plate.

Ole Miss scored on another wild pitch in the third before blowing the game open with an RBI double from first baseman Tim Elko followed by a two-run shot to right-center from left fielder Kevin Graham that put the Rebels up 6-0.

Bianco’s squad continued to pile on runs in the middle innings, scoring three in the third before extending the lead to 10-0 on a solo shot from Graham, his second home run of the day.

The senior outfielder finished 5-for-5 on the afternoon, recording three RBIs and two runs scored in his best collegiate performance to date.

“It was just one of those days,” Graham said. “I think I had three infield hits so that was awesome. I was seeing it well all day.”

The Tigers cracked the scoreboard in the top of the fifth on a two-run home run from second baseman Justin Colon, but could not narrow the deficit any further as Ole Miss reliever John Gaddis recorded a four-inning save to close out the series.

Gaddis, who pitched in his second game back after undergoing an appendectomy in April, gave up three hits and a walk in four innings as he mowed through the lineup for two complete turns.

“I felt better today than I did last Sunday,” Gaddis said. “My splitter was working pretty well and that allowed me to get a few swings in misses in timely spots and that helped.”

Ole Miss now sits three games above Missouri and a game above Mississippi State and Kentucky in the SEC standings with two series remaining in conference play.

The Rebels travel to Hattiesburg on Wednesday for a matchup with Southern Miss before heading down to Baton Rouge for a series with LSU. They close out their regular season schedule with a series at home against Texas A&M starting on May 19.