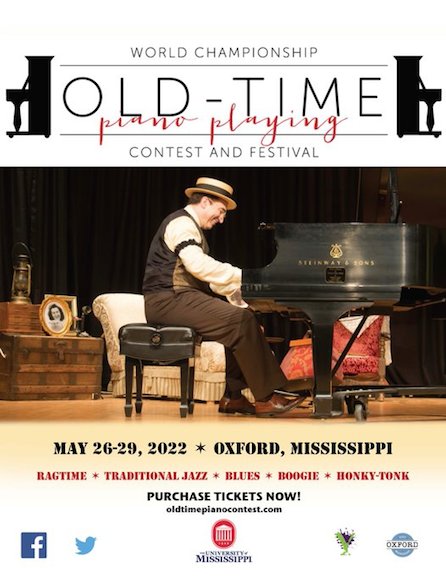 Pianists from around the world will be in Oxford May 26-29 for the Old-Time Piano Playing Contest and Festival.

In 2016, the Old-Time Piano Playing Contest and Festival moved to Oxford thanks to previous contestant judge Ian Hominick. This festival is packed with culture and history as well as Ragtime, traditional jazz, blues, boogie, and honky tonk music.

Beginning in 1975, the Monticello Railway Museum in Illinois hosted the first of 12 World Championship Old-Time playing contest editions. As time went on and the contest grew, the festival turned into much more than just a contest. It went from a one-afternoon affair to a multi-day festival that educated the general public on Ragtime melodies and other popular music prior to the 1940s.

Oxford is packed with history, culture, and tradition making it the perfect new home for the Old-Time Piano Playing Contest and Festival.

Music prior to the 1940s will be the main focus of the festival. The pianist has the opportunity to compete while simultaneously teaching others of the wonderful lost tunes. Besides the music, there are other activities participants can attend such as workshops, guest artist performances, silent movies, an old-time sing-along, a double-decker tour of Oxford, and after-hour events on the Square.

The contest and festival have something for all ages and tastes!

The festival’s nightlife will consist of tunes, food, and dancing at the Old Armory Pavillion. Each night a different event will take place at the Pavillion with a different theme.

Thursday, May 26th at 7 p.m. Tune-ups Party will be “strutting their stuff” on the keyboard while participants and guests arrive in town.

On Friday, following the piano contest, guests can celebrate with “Ragfest” at 8 p.m. The “Old Time Sing-a-long” will begin at 6:30 pm Saturday night as the contest founder performs old classics. As the festival comes to a close, a salute to Veterans will begin Sunday night at 7 p.m.

Festival organizers have lined up a cocktail bar and rotating series of Food Trucks touching on Oxford culinary favorites including Taylor Grocery, Hot Box Hibachi, Hawaiian Style Chicken, and Boswell’s Jamaican Food.  Tickets for the concerts at the are $10 for the entire night or all-event pass for $150.

All event and single tickets are available online or at the door.

For ticketing and schedule information visit:  www.oldtimepianocontest.com  or call 662-801-2251

Wayne Andrews is chairman of the Yoknapatawpha Arts Council.