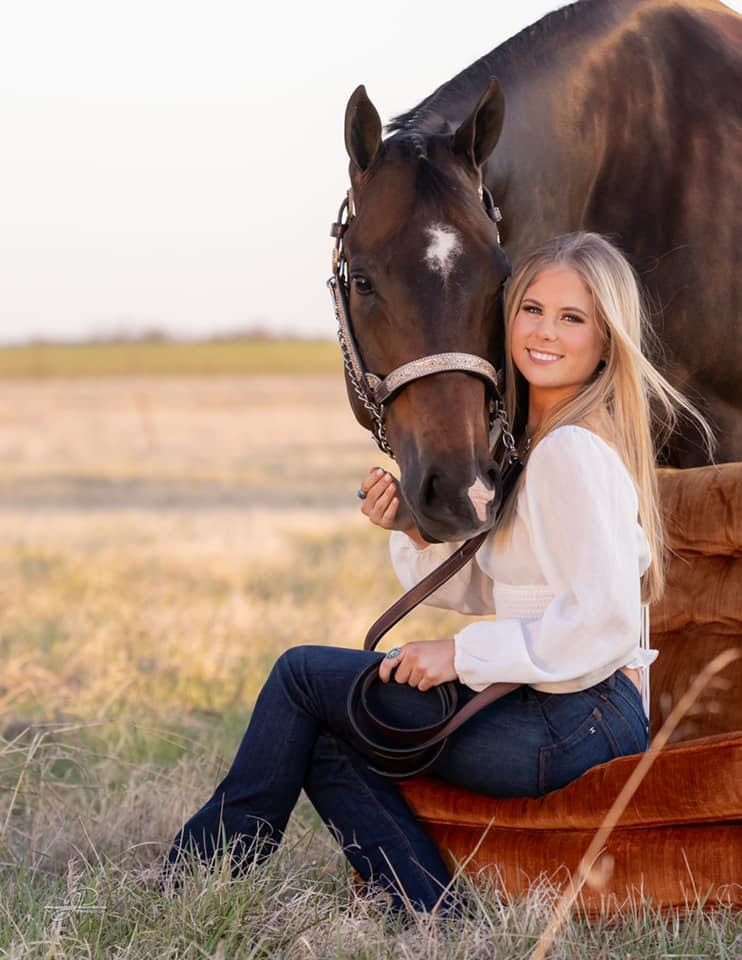 Oxford High Senior Avery Langley will be attending Oklahoma State University in the fall as an equestrian.

Langley is the first Oxford High School student to sign to a college to ride horses. She started riding horses when she was young, and it quickly became a passion of hers.

“I started actually riding horses when I was in sixth grade, but I have always ridden horses casually when I would go to Oklahoma to see my family. But I never started taking the sport seriously until sixth grade,” Langley said.

Every college-bound equestrian has to adapt to the new rules of NCAA equestrian competitions. To Langley, it can feel like an entirely new version of the sport.

“When I show horses, right now as my sport out of college, I compete against girls on our own horses,” she said. “So, we own our horse, and we show it. We know all of our horses’ buttons, how they handle being in the show pen and everything about our horses. But, when I go to college it is completely different; it is like starting a new sport to most of the girls.

“We have to ride on horses that we have never been on, and we only have five minutes to warm up. So, you go into the show pen without knowing anything about this horse, and you compete head to head with another girl that also drew the same horse you did. It is going to be way different than how I have been riding my whole horse show career.”

The OHS graduate is one of the top equestrians in the country.

“Most of the girls I compete with have been riding since they were born basically,” Langley said. “With me starting so late, I had to really work my butt off to get where I am today where I am competing against these girls.”

Langley travels all around the United States to show her horse. She rides and shows in the Western style, which has two subdivisions.

“There is an English side and a Western side. I am on the Western side. Then, the western side is split into two, there is reigning and horsemanship. I am horsemanship. There are usually five girls [on one team] that compete, and you compete against [an]other team like that,” Langley said.

She has partially had to miss out on her high school experience to pursue her dream, according to Langley, but once she signed for college, she knew her hard work had paid off.

“I decided my sophomore year that I was going to pursue horsemanship. It was really hard for me to juggle volleyball and horses. I figured out that I didn’t have a future going D1 in volleyball, so I decided to continue with horses. My love for animals really has helped me bond with the sport, and with other reasons I decided to quit volleyball. That is when I really decided to give my everything to horses,” Langley said.

For the equestrian, riding horses is somewhat of a family tradition. Both her aunt and her mom showed horses when they were younger.

“They started showing when they were young. My mom quit during college. My aunt continued, so I would go and watch these horse shows and stuff. Eventually, my mom, my sister and I started showing as well. We started showing jumpers in a barn in Oxford. I didn’t really get along with that type of riding, so I decided to switch over to the western style,” Langley said.

Next year, Langley will begin showing horses with the OSU equestrian team.

“Most of the equestrians don’t really get a scholarship. One of the reasons is because none of us have really done the sport before. We have practiced riding on different horses, but we don’t know it 100 percent. It isn’t like a volleyball player who has played on the court 100 times. Another reason is because the sport takes a lot of money to take care of the horses, so financially you can’t really give full rides, but you can get plenty of other scholarships,” Langley said.

What is Langley’s favorite part about her sport? It is being around horses and meeting new people in the industry.

“Honestly, the competitive side is a lot of fun, and I have met the most amazing people,” said Langley. “But, my favorite thing is just the bond between me and the horses. Whether I don’t know the horse or I do know the horse, I can go up to a horse and bond with it immediately. I think that is why I love it so much. It feels like I have a best friend wherever I go.”

She believes that she has gained infinite lessons from horse riding.

“I have learned so much from horse riding, and no one will really understand that until you actually experience it,” Langley said. “[Like] being forced to give every second and being forced to come to the barn at midnight to wrap a horse so they don’t get hurt. The sport just takes so much time and effort. You have to be determined to be in the sport. This sport has taught me responsibility, independence, and a lot of things that will help me in my life and in the future.”

I just feel like finally my hard work and effort has paid off. But, people joke about me being a horse girl, and it doesn’t phase me because I think no one understands. They never mean it as an insult, but I am just really happy that it finally paid off, and that people are recognizing that I worked my butt off for this and will continue to.”