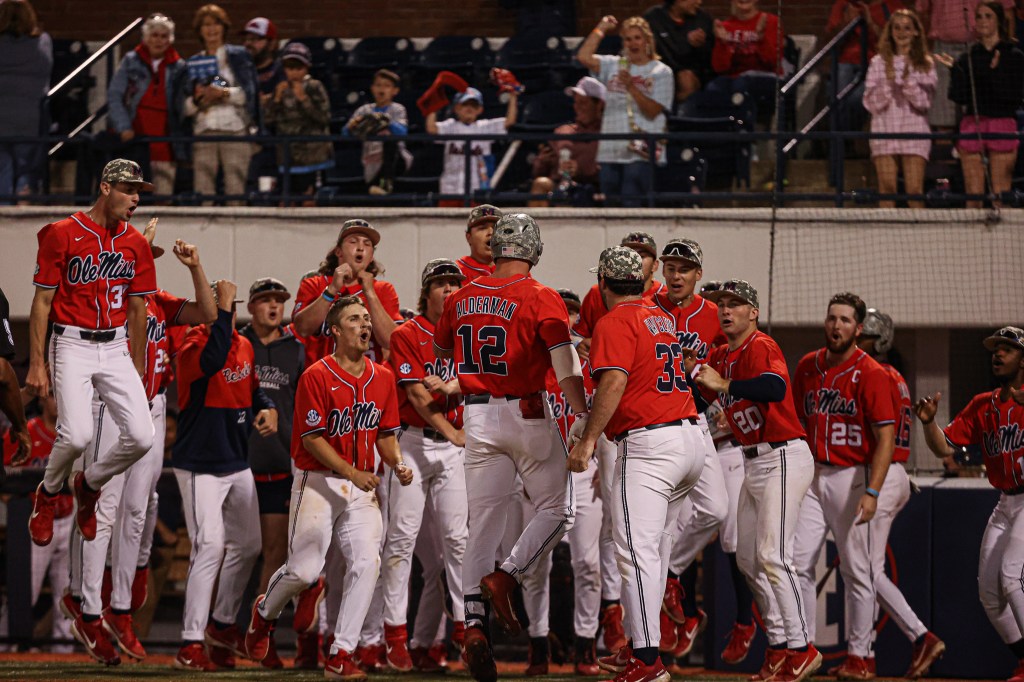 Ole Miss players mob designated hitter Kemp Alderman (12) at the plate after a home run in the Rebels' 7-5 victory over Missouri on Friday, May 6, 2022. (Josh McCoy/Ole Miss Athletics)

HATTIESBURG, MISS — Ole Miss baseball is getting hot at the right time.

Head coach Mike Bianco’s squad was carried by an excellent performance on the mound from Drew McDaniel, who tied a season-high with five innings pitched. The junior righty gave up just one run on four hits while striking out eight in his best start of the season.

Left fielder Kevin Graham stayed hot after a batting .533 against Missouri with two home runs five RBIs, launching his ninth home run of the season in the fourth inning to give Ole Miss a 2-1 advantage.

Designated hitter Kemp Alderman followed up the two-run homer with a big fly of his own, extending the lead to 3-1 with a laser off the scoreboard in left. The back-to-back jacks marked the fifth time this season the Rebels hit home runs in consecutive at-bats.

Ole Miss cruised the rest of the way, adding an insurance run in the fifth on an RBI single from first baseman Tim Elko before the bullpen carried them across the finish line.

The win marked a key turning point for Ole Miss as they fight for postseason positioning. They have been wildly inconsistent this season, alternating between unstoppable juggernaut and ineffective bottom-dweller from game to game.

They jumped out to a 13-1 start early in the season that earned them the No. 1 ranking in the country before losing 16 out of their next 25 games and finding themselves clawing for a spot in the SEC tournament.

They are 6-2 since the low point of their season on Apr. 23 however, with wins over Mississippi State, No. 4 Arkansas, Missouri and No. 14 Southern Miss. They scored seven or more runs in all three games against Missouri last weekend, including a 10-2 beatdown on Sunday that marked the first time in a month the team eclipsed double-digit runs in a game.

The Rebels are rolling, and maybe it’s attention to detail, maybe it’s a soft part of the schedule, maybe it’s the camo hats they debuted last weekend, but one thing is for sure: nobody wants to face a confident Ole Miss lineup in Hoover.

They still sit in the bottom third of the conference standings, but Ole Miss can improve their seeding in the SEC tournament and boost their RPI if they manage to steal a few from No. 17 LSU this weekend. The Rebs to Baton Rouge to take on the Tigers in a three-game set before returning home next weekend for a series with No. 10 Texas A&M.