Ole Miss comes up short against No. 4 Arkansas in SEC quarterfinals 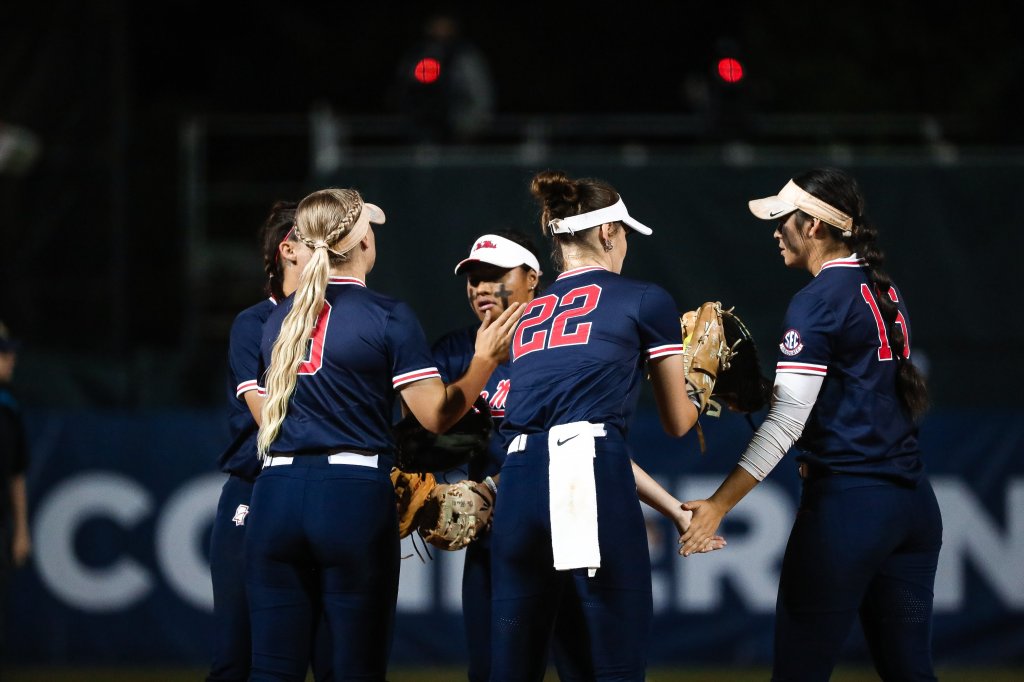 Ole Miss pitcher Anna Borgen (22) meets with the infield prior to the sixth inning of the Rebels' 3-0 loss to Arkansas in the SEC quarterfinals on Thursday, May 12, 2022. (Josh McCoy/Ole Miss Athletics)

GAINESVILLE, FLA. — Ole Miss softball fell to No. 4 Arkansas in the SEC tournament quarterfinals on Thursday as they were shut out by Razorbacks’ starter Mary Haff.

The Rebels (39-17, 12-12 SEC) got plenty of runners on base against Haff but struggled to find timely hits, stranding 11 runners on base in the 3-0 contest, seven of which were left in scoring position.

Ole Miss combined for just five hits as a team as they failed to generate any run support for starter Anna Borgen, who was masterful in the loss against a talented Arkansas lineup.

The senior righty gave up just two earned runs on three hits while striking out seven in six innings of work, tearing through the Razorbacks’ lineup over and over. She was let down by her defense in the first inning when third baseman Paige Smith committed a costly throwing error that allowed K.B. Sides to score all the way from second.

The Heath, Tex. native gave up another run in the second on a solo home run by Linnie Malkin before settling in and retiring nine out of the next 10 batters she faced.

Borgen surrendered another solo shot in the bottom of the fifth that extended the Arkansas lead to 3-0 after Ole Miss stranded the bases loaded in the top of the inning.

The Razorbacks did not look back from that point, cruising to a victory as they secured a spot in the SEC semifinals for the first time since 2018.

“It was a tough, tough game,” head coach Jamie Trachsel told reporters after the game. “Anna did a great job. Back-to-back performances, and she gave us a chance to win. We had our chances and were just missing that timely hit, but I’m proud of the fight, proud of the resiliency.”

Ole Miss will now wait to see where they will slot into the upcoming NCAA softball tournament. The field of 64 will be announced on Sunday at 6 p.m. on ESPN2.