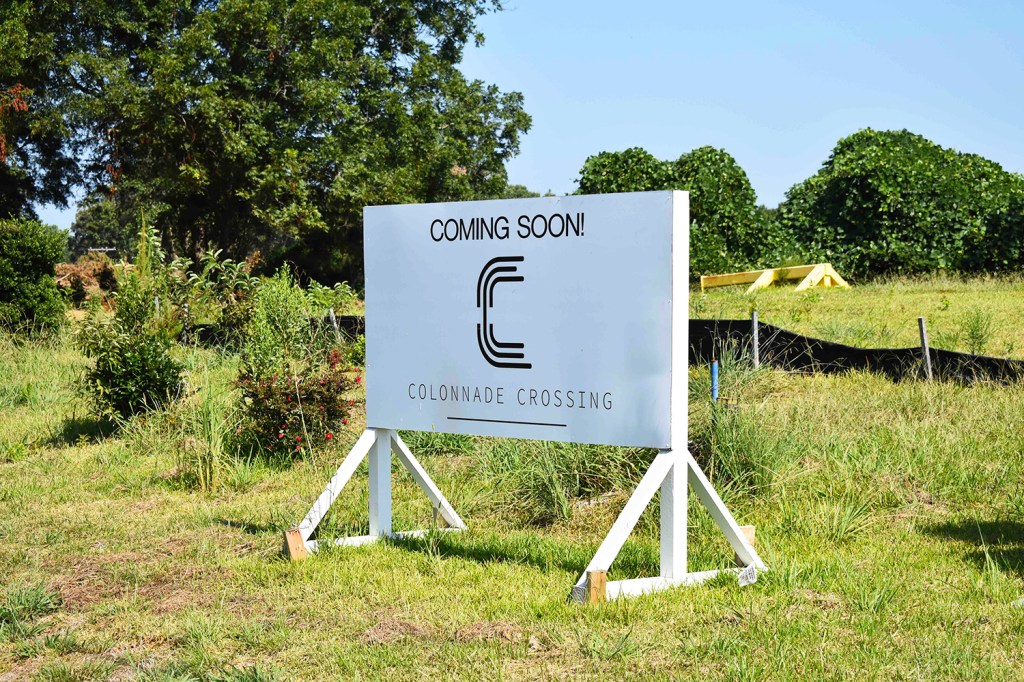 Phase two of the Colonnade Crossing development is underway, but issues with water capacity may pose a problem for developers.

Colonnade is an 88-acre, 22-lot development commercial subdivision west of Park Drive and across Molly Barr Road. A third of the property is being zoned for Traditional Neighborhood Business with the remaining two-thirds being zoned for Suburban Corridor.

The Colonnade Crossing – Phase 2 is zoned for the Suburban Corridor and will be located on the northwest corner of Concordia Avenue and Bainbridge Street, north of MS Highway 30. Property owner MFM Development is proposing to build an athletic facility with a gym and office space on the site.

Water will be provided to the site from two proposed connections on Molly Barr and The City will own and maintain those water mains within the public streets and up to the water meter connections. The location where MFM plans to tie into the system is a pressure-boosted zone that serves Oxford Commons.

Planning Commission members were notified that a water capacity analysis has been requested by The City and will be needed to ensure water connections will not compromise the city’s pressure boosted zone.

“We just got to make sure that we’re not going to create an impact on this line because of the demand that we’re requiring that we can’t maintain it in other areas,” said Reanna Mayoral, City Engineer.

Until the analysis is complete, the Planning Staff will not allow MFM’s request to go before the Mayor and Board of Aldermen.

In addition to a completed water system analysis, Engineering Staff requested MFM to submit a copy of the covenants for the subdvision to the Planning Department prior to permitting, earn approval from the City Engineer once the analysis is completed, to provide an acceptable connection location for water service as determined by The City, to gain approval from the Mississippi Department of Transportation for access to Highway 30 and upon completion of all improvements required by MDOT and, lastly, receive a performance bond approved by the Engineering Staff.

Commissioners questioned why they were even considering this request if there was an issue with water capacity.

Mayoral said they are anticipating results showing the site can handle all the water supply or giving them a sense of scale. Staff plans to keep progressing so the site will be ready for the next step in development.

“We’re just trying to continue forward progress instead of stopping the entire development at this phase,” she said. “We’ve approved the previous phases because we did feel like there was small enough demand that we could handle that. We’ve been working and notifying the developer for several years now that we were going to have to be sure this wasn’t going to be an issue.”

As Commissioner Kirk Milam addressed the issue in more depth, he mentioned the fire at The Lanes Bowling Alley (formerly known Kiame’s Bowling Alley) and The Brass Monkey Bar and Pub that occurred in September 2010. Water stored in the city’s elevated tanks was used to fight the fire at both businesses, but it lowered the water pressure in many parts of Oxford.

“We lost water throughout the city because we didn’t have enough sufficient capacity to pump it all,” said Milam.

“Are you saying that there is an option to provide water from somewhere else,” he said to Mayoral, “Or are we going to get to a point and have to stop it later?”

Mayoral confirmed there is an option to obtain water from another location and staff is working to find out if they will have to pursue that option.

“It will be more expensive for the developer. They will have to run additional mains,” she said. “We’re just trying to find out if this would be required or not. Kiame’s was a series of very, very unusual events but we just want to make sure that in our day-to-day operations that we maintain the pressures that we got to for Oxford Commons.”

The staff anticipates that they will have an answer from developers on water capacity soon, but they will have conditions in place to protect The City and citizens of Oxford.