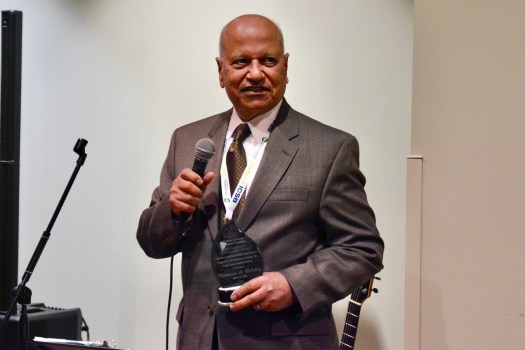 Mahmoud ElSohly, professor of pharmaceutics and drug delivery and director of the Marijuana Project at the University of Mississippi, receives the Outstanding Contribution in Natural Products Award during the 20th ICSB. Photo by Whitney Tarpy/UM School of Pharmacy 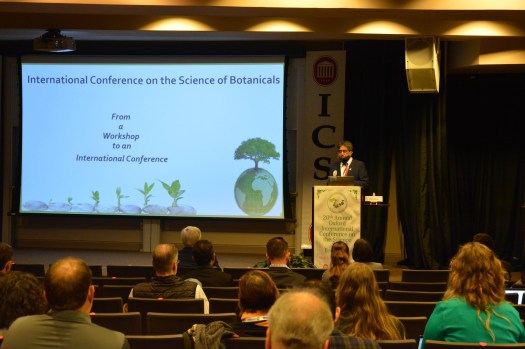 Ikhlas Khan, NCNPR director and distinguished professor of pharmacognosy at the University of Mississippi, opens the 20th International Conference of the Science of Botanicals. Photo by Junaid Rehman 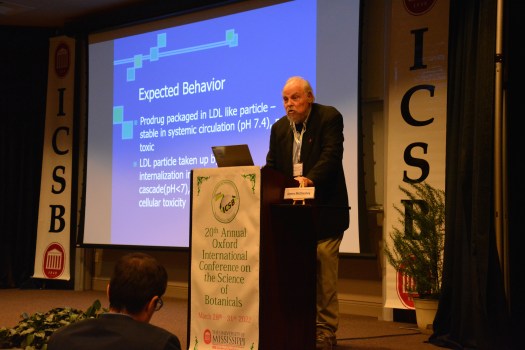 For the first time since 2019, the botanicals industry descended on Oxford this spring for the International Conference on the Science of Botanicals.

The conference, hosted annually by the National Center for Natural Products Research within the University of Mississippi School of Pharmacy, brought together leading industry figures, government officials and academics for a week of discussion and idea sharing of the ancient, yet evolving, study on medicinal plants.

This year’s conference was the 20th edition of ICSB, but the conference has been on a hiatus since 2020, due to COVID-19 creating difficulties in travel. Being able to hold the conference in-person after the delay only heightened the excitement, said Ikhlas Khan, NCNPR director and distinguished professor of pharmacognosy.

“It was great to be together after a long break,” Khan said. “People were enthusiastic and energized to the level that you can feel it. Everyone felt that the agenda was full of exciting talks, and discussion during breaks was very stimulating.”

That enthusiasm was on display, as the conference was well-attended with 238 in-person attendees. Presentations included speakers from companies and organizations such as the American Botanical Council, United Natural Products Alliance and the U.S. Food and Drug Administration.

Tieraona LowDog, an internationally recognized figure in the botanicals industry and founding member of the American Board of Integrative Medicine, delivered the keynote address.

Besides spirited discussions, the conference also offered a chance to recognize the accomplishments of attendees.

One such person was Mahmoud ElSohly, research professor in NCNPR and professor of pharmaceutics and drug delivery, who received the Outstanding Contribution in Natural Products Award sponsored by Waters Corp. Since 1981, ElSohly has directed the UM Marijuana Project and is one of the world’s leading authorities in cannabis research. His work has received extensive recognition, including from mainstream media outlets such as NBC’s “Today” show.

This year’s conference also saw the inaugural McChesney Lecture. Named for James D. McChesney, a former UM pharmacy professor who was instrumental in the founding of NCNPR, the lecture will serve as a platform for those in the botanicals industry to share innovative new research.

“I am very honored by this prestigious conference creating a lecture in my name,” McChesney said. “I hope that it can be a venue for communication of significant research and development advances in botanical and natural products endeavors.”

It was only fitting that the first speaker was McChesney himself, who is chairman and CEO of Cloaked Therapeutics LLC. His lecture detailed his company’s efforts to enhance the safety and efficacy of cytotoxic chemotherapeutics, drugs that target cancer cells.

McChesney hopes that future lecture speakers follow his lead in bringing new and innovative ideas to the table.

“I hope to see reports of innovative progress in understanding how botanicals and natural product substances can benefit mankind arising from thinking ‘outside the box,'” McChesney said.

With the conference reaching such a big milestone, Khan reflected on how important ICSB has become over the past two decades.

“This is a great milestone to reach,” Khan said. “ICSB has become a community of stakeholders meetings and plays a big role in bringing academia, industry and government together.”