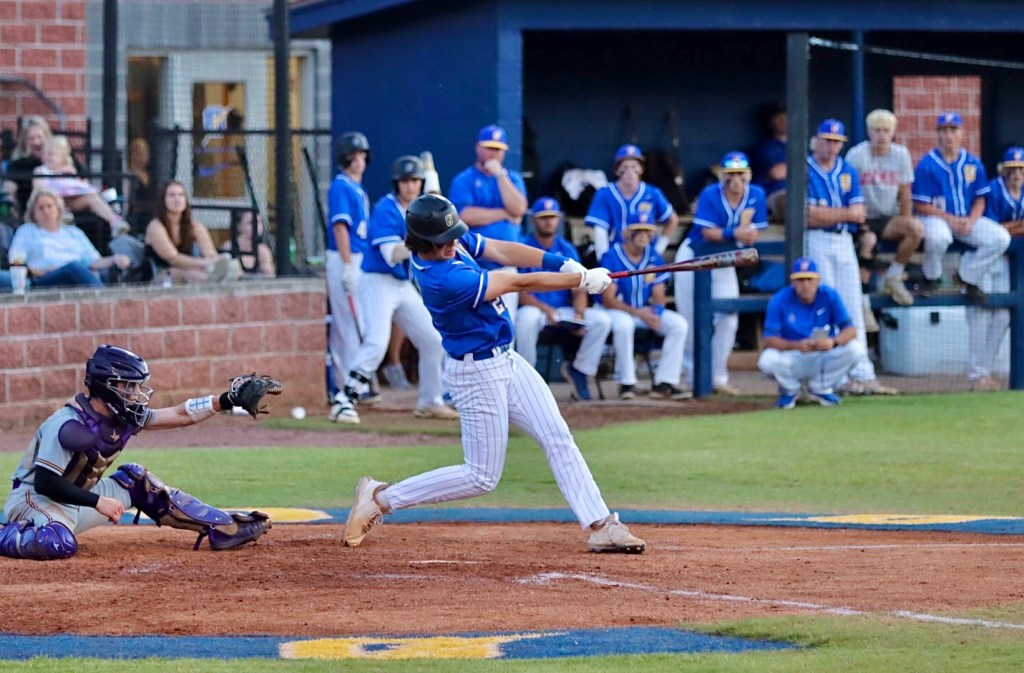 Oxford's Jack Harper swings and misses at a pitch in the fifth inning of the Chargers' 6-3 loss to DeSoto Central on Sat., May 14, 2022. (Angel Smith)

OXFORD, MISS — Oxford dropped game one of their MHSAA Class 6A North Half championship series on Saturday, falling 6-3 to DeSoto Central at home.

The Chargers (23-9, 7-2 Region 1-6A) were unable to generate consistent offense against the Region 2-6A champions as Jaguars’ starter Brady Loftin, who gave up three runs in seven innings while striking out eight batters.

The Mississippi State commit was masterful on the mound, combining a low-nineties fastball with a sharp breaking ball and a devastating changeup. He hit his spots all night, mixing speeds and locations effectively to keep the Chargers’ hitters off-balance.

“It was tough, that guy’s good,” said head coach Cade Hoggard. “He hit spots, he mixed, he did everything he needed to do to keep us off base.”

The Jaguars cracked the scoreboard in opening frame as Oxford ace Dixon Webb struggled to locate his fastball against a talented DeSoto Central lineup.

The senior righty allowed the first two batters of the inning to reach before plunking Jaguars’ right fielder Brock Tapper to load the bases with only one out. After allowing center fielder Kristian Sprawling to cross the plate on a wild pitch, Webb surrendered a two-run double to designated hitter Ryan Musselwhite that put DeSoto Central up 3-0.

The Jaguars pushed another run across on an RBI double from first baseman Gavin Brassfield before Webb forced a pop-out on the infield to limit the damage and get out of the jam.

Hoggard defended his ace after the game, saying he’s earned the right to start every big game for Oxford this season.

“I have nothing but good things to say about Dixon. He’s a competitor, he’s a guy that game one—it doesn’t matter if we’re facing Nolan Ryan he’s gonna toe the rubber for us. He’s earned that as a leader, he’s earned that as a captain, but he just wasn’t at his best tonight and they capitalized on it,” Hoggard said.

The Chargers got a run back in the bottom of the third on an RBI single from catcher Campbell Smithwick, but DeSoto Central added two more in the top of the fourth to extend their lead to 6-1.

Oxford managed to bring the deficit back to three in the fifth after designated hitter Thomas Rayburn scored on a sacrifice fly by second baseman Reid Kent before left fielder Hayden Campbell crossed the plate on another RBI single from Smithwick, his second of the night.

The Chargers were unable to bridge the gap any further however as they struggled to advance baserunners against a dominant Loftin.

“They go put a four-spot on us [in the first] and it’s tough because you preach that you’ve got the whole seven innings to scratch but it’s tough not to press,” Hoggard said. “You know a guy’s throwing with velocity, you’re trying to catch up to a low-nineties fastball and he just had our number a lot of times.”

The Jaguars’ senior ace single-handedly shut down the Chargers’ running game with a deceptive pick-off move to first that caught two baserunners off guard in the early innings. Oxford looked tentative on the base paths after the early pick-offs, lunging back to the base every time Loftin raised his leg on the mound.

“He basically nullified our run game. He’s one of those that—talking with other coaches—that didn’t really come up. He does have a good move, we knew he had a good move but usually you try to get out there and see what he’s got with your first guy but we couldn’t get a read on him so we shut it down,” said Hoggard.

A scary scene unfolded in the middle of the fourth inning as Smithwick collapsed in the Chargers’ dugout after taking a ball to the throat.

The Oxford catcher briefly lost consciousness before coming to, but was briefly replaced behind the dish by sophomore Rowan Gordon.

“All I know is we were sitting there talking about the gameplan and everything else and all of a sudden there’s a ruckus out front and you see Campbell just kind of fold,” Hoggard said. “His dad was right there and grabbed him—it was just one of those where you didn’t know what was going on but he came to pretty quick, knew where he was and everything else but it was still a scary moment.”

The incident clearly affected Oxford coaches and players, who appeared shaken for a few innings before Smithwick returned to the lineup in the fifth.

The Chargers will have to brush off the scare and the punch they took in game one when they travel to DeSoto Central on Monday to take on the Jaguars in game two.