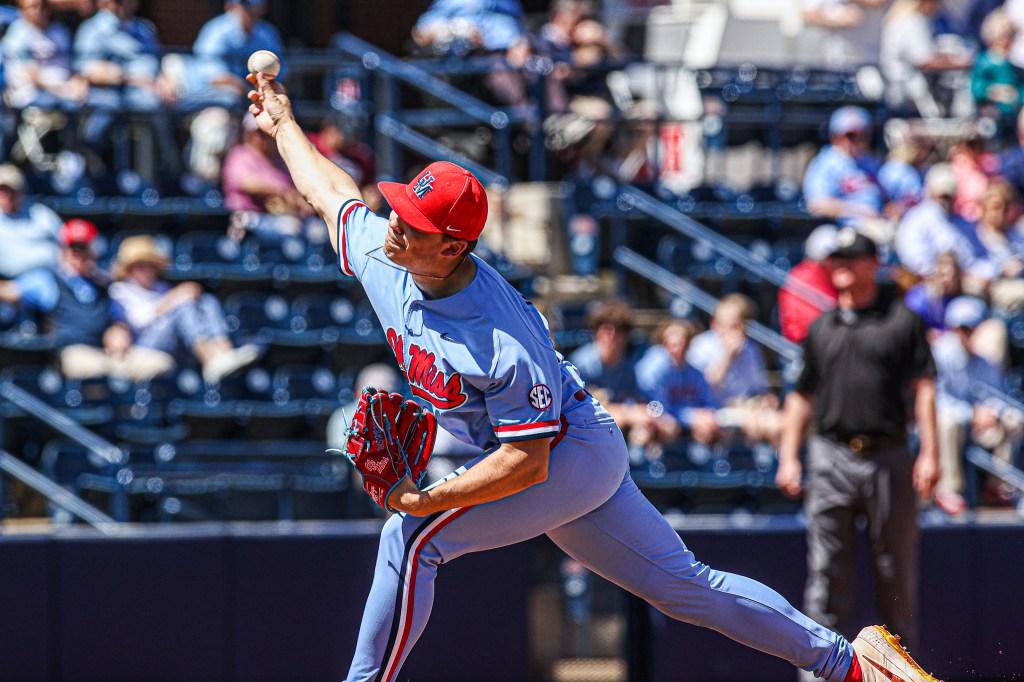 Ole Miss reliever Jack Washburn delivers a pitch in the fifth inning of the Rebels' 8-5 victory over LSU on Sun., May 15, 2022. (Josh McCoy/Ole Miss Athletics)

Ole Miss and LSU have been playing baseball against each other since 1906.

The two SEC West foes had squared off with each other 345 times entering this weekend’s series, but the Rebels had never swept the Tigers on the road before outscoring them 24-9 over three games to secure the first sweep of LSU in Baton Rouge in program history.

Ole Miss (31-19, 13-14 SEC) trailed for half an inning in the series, falling behind 2-0 in the first inning of Friday’s game one on a two-run home run by Tigers’ centerfielder Dylan Crews before responding with four runs in the top of the second to take the lead.

Their 5-3 victory on Friday marked their fifth straight win after a sweep of Missouri at home last weekend and a win over No. 14 Southern Miss in Hattiesburg on Wednesday.

They exploded for 11 runs in a blowout on Saturday before capping off the sweep with an 8-5 victory over the Tigers on Sunday to extend the winning streak to seven straight games.

The Rebels have now won nine of their past 11 outings after falling to the bottom of the SEC standings late last month, and are poised to finish as high as fifth in the conference heading into the final weekend of the regular season.

They travel to Jonesboro to take on Arkansas State on Tuesday before returning home to host No. 10 Texas A&M at Swayze Field for a three-game series starting on Thursday.