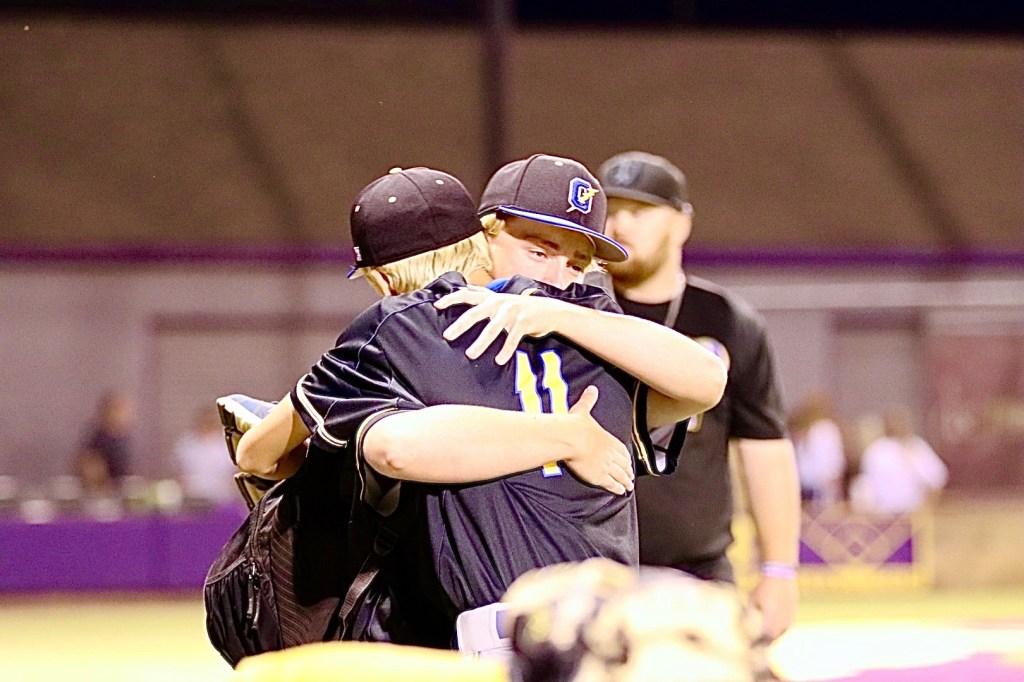 Oxford's Drew Carter (11) embraces first baseman Ben Goubeaux after the Chargers' 8-2 loss to DeSoto Central in the MHSAA Class 6A North Half championship on Mon., May 16, 2022. (Angel Smith)

SOUTHAVEN, MISS. — Campbell Smithwick stood frozen staring at the celebration unfolding in front of him.

Less than an hour earlier the Oxford catcher thought he scored the go-ahead run on an RBI single by pitcher Brady Stinnett in the third inning of the Chargers’ 8-2 loss to DeSoto Central in the MHSAA Class 6A North Half Championship, only to have it called back after the home plate umpire ruled Stinnett stepped out of the box during his swing.

Now, just four innings later, he stood transfixed as he watched the Jaguars stream onto the field in celebration of their third North Half championship in the past four seasons.

Oxford had been building momentum in the early innings after falling behind 2-0 in the opening frame, plating a pair of runs in the second before Smithwick reached on a hit-by-pitch to lead off the third.

He advanced to second on a groundout by right fielder Thomas Rayburn, and crossed the plate on Stinnett’s single before being called out of the dugout and told to return to second by the home plate umpire due to the illegal action call.

Chargers players and coaches alike were dumbfounded by the call, throwing their hands in the air and pleading with the umpires for an explanation.

“That’s just a crazy baseball play,” Smithwick said after the game. “I had never seen that called but it happened—that’s how it is and it will never change.”

“I thought I did something big for my team but it kind of got taken away,” said Stinnett. “It’s whatever—it’s baseball that’s gonna happen.”

The call proved to me a momentous one, as Oxford stranded Smithwick on second in the top of third before Stinnett surrendered a grand slam in the bottom of the inning that put the Jaguars up 6-2.

Oxford’s dugout looked deflated the rest of the way as they struggled to claw their way back into the game after being dealt an early gut-punch.

“Anything like that is gonna deflate a team,” Stinnett said. “We weren’t down that bad but it took a little life out of us.”

DeSoto Central went on to win 8-2, sealing their third trip to the state championship series in the past four seasons.

“Their guys did a great job taking advantage of it,” Smithwick said. “Credit them for that—it seems like the whole series they were getting the timely hits.”

As Smithwick watched the Jaguars celebrate their victory he stood engrossed by the scene in front of him, unsure of how to process the last few hours.

“You just get flashbacks of the season,” Smithwick said when asked what was going through his head after the final out. “I had a lot of fun with these guys… we’re gonna miss Ty, Dixon, Joe, Ben, Tuck, Aidan. They laid the foundation and it’s gonna be fun next year.”

The Chargers finish their season with a 23-10 record after their Cinderella run fell short in the North Half championship. Hoggard and company will try to regroup and use this loss as fuel for next season as they attempt to return to the state championship series for the first time since 2017.