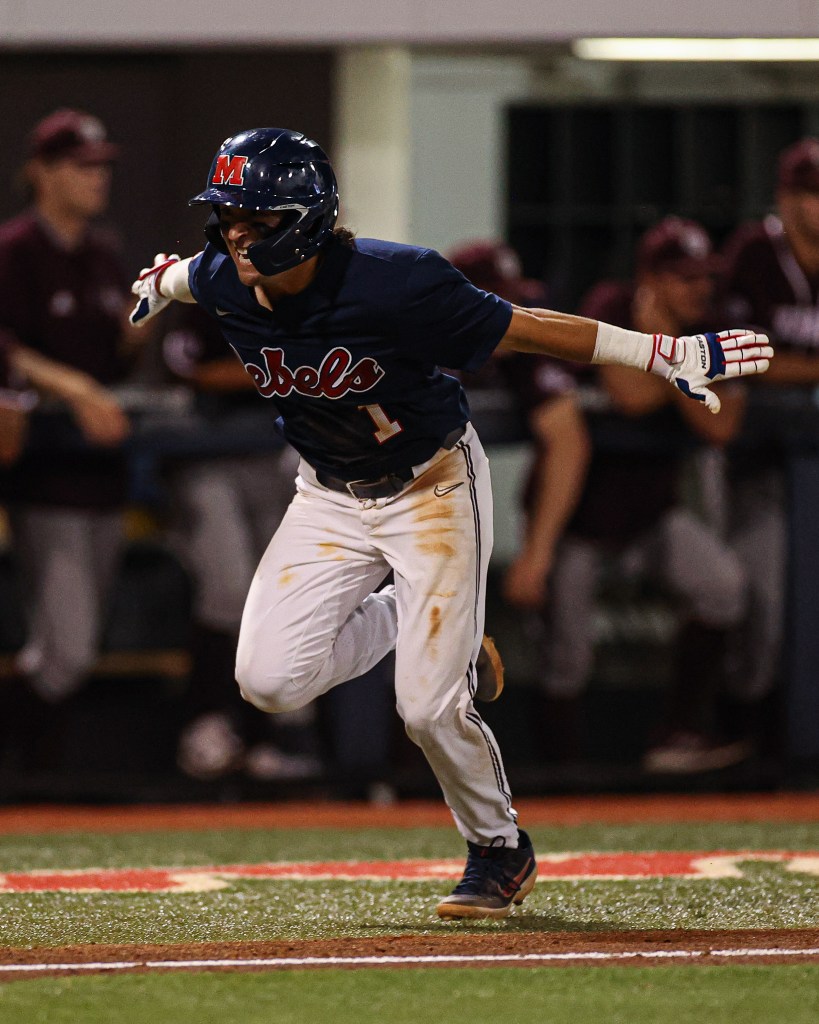 Ole Miss second baseman Peyton Chatagnier celebrates as he crosses the plate on an RBI single by third baseman Justin Bench in the fifth inning of the Rebels' 14-6 win over Texas A&M on Friday, May 20, 2022. (Josh McCoy/Ole Miss Athletics)

OXFORD, Miss. — Ole Miss baseball responded to their 10-5 loss to No. 4 Texas A&M on Thursday with a 14-run explosion on Friday to even the series at one game a piece.

They recorded 17 hits in the blowout win, driving Texas A&M starter Wyatt Tucker out of the game after just two innings of work. Eight different players recorded a hit on the night, and seven drove in at least one run as Ole Miss cruised to a victory after falling behind in the top of the first.

The Rebels have now won eight of their last nine games after falling to 7-14 in conference play with back-to-back losses to Arkansas at the beginning of the month.

They scored seven or more runs in six games over that stretch as the offense came alive after struggling through the first few months of SEC play.

Dunhurst has recorded a hit in eight straight games after going 2-for-3 with an RBI single and two runs scored in Friday’s victory, while Chatagnier is batting .364 during the winning streak to raise his season average up to .238.

“[It’s] really just simplifying things,” Dunhurst said when asked what changed about his approach at the plate. “I changed my swing a little bit this year and went [with it] throughout the whole year and kinda got tired of getting out so I was like ‘you know what I better go back to what was working,’ so we’re doing that, we feel good and we’re gonna continue with it.”

Now, just a few short weeks later, they have a chance to finish at .500 in SEC play with a win over the Aggies in Saturday’s rubber match.

“Right now we look exactly how we thought we would the whole year,” Dunhurst said. “This is who we thought we were gonna be every game… it’s better late than never.”