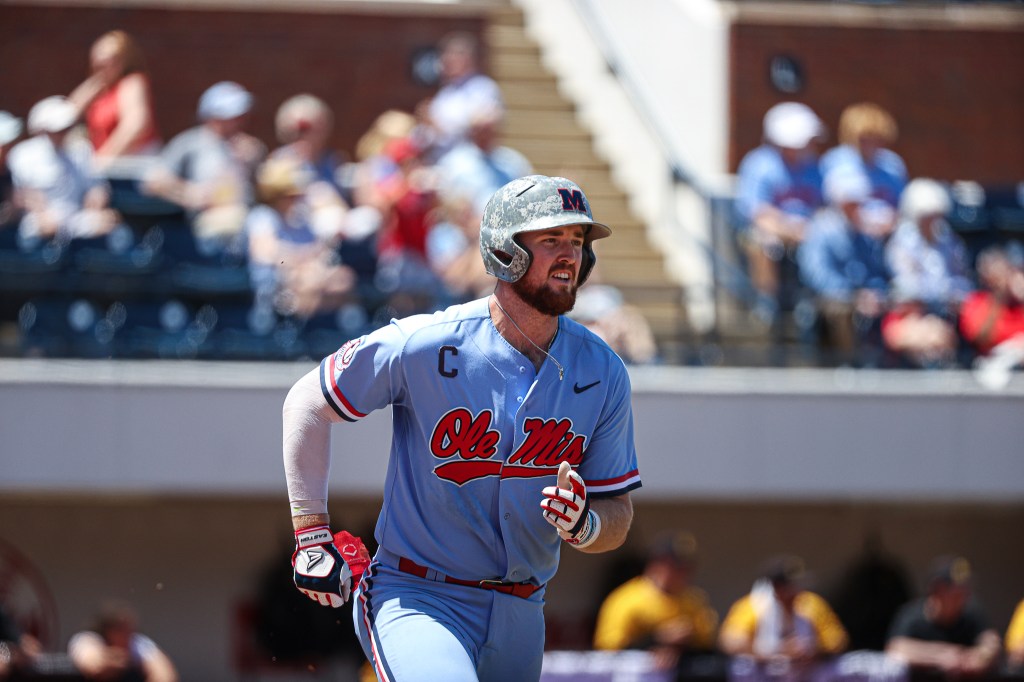 Ole Miss first baseman Tim Elko hits a single in the first inning of the Rebels' 9-0 win over Missouri on Sunday, May 8, 2022. (Josh McCoy/Ole Miss Athletics)

BIRMINGHAM, Ala. – The Southeastern Conference announced the 2022 All-SEC baseball teams on Monday, with Ole Miss having three players receiving postseason honors from the conference office.

A Freshman All-SEC honoree in 2021, Gonzalez takes home his first First Team All-SEC nod after a standout season at shortstop. The California native batted .280 on the season, ranking fifth in the conference in walks (44), eighth in runs scored (57) and 10th in home runs (16), pacing the Rebels with a .417 on-base percentage. The sophomore saved his power supply for league action, registering 12 of 16 homers against SEC opposition.

Rounding out one of the more memorable careers in recent program-history, Elko earns his first All-SEC nod after earning Scholar-Athlete of the Year honors a year ago. The native Floridian has hammered 19 home runs this season, the third most ever by a Rebel to move into second place all-time in career home runs at 41. In SEC action, Elko is batting .319 in SEC play this season, matching Gonzalez’s 12 homers against conference teams. The fifth-year senior has racked up 61 RBIs this season, the third most in the league.

Tupelo, Mississippi, native Hunter Elliott earned one of 13 spots on the Freshman All-SEC squad. The lefty posted a 3.29 ERA on the season, the seventh lowest in the SEC, ranking 11th in the league in strikeouts (74), including seventh in strike outs looking (26). Elliott’s .214 opponent batting average is the seventh lowest in the SEC. A two-time SEC Freshman of the Week, Elliott has garnered a 3.43 ERA against conference foes.