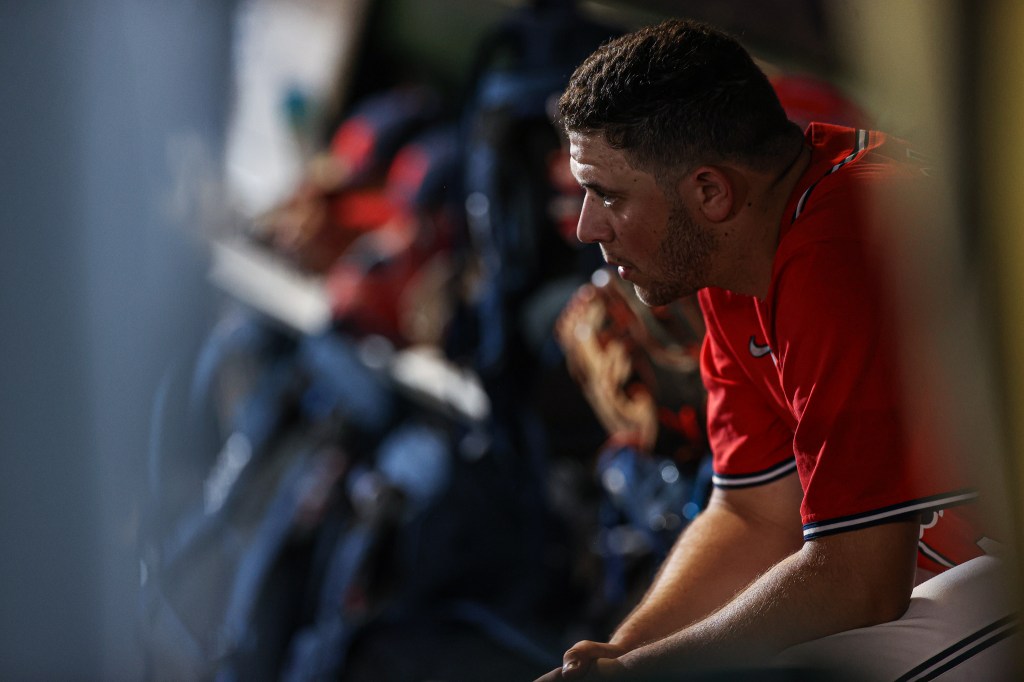 Ole Miss pitcher Dylan DeLucia rests in the dugout between innings during the Rebels' 3-1 loss to Vanderbilt in the first round of the SEC baseball tournament on Tuesday, May 24, 2022. (Josh McCoy/Ole Miss Athletics)

HOOVER, Ala. – Ole Miss fell behind and couldn’t climb out of the hole on Tuesday at Hoover Metropolitan Stadium, falling in the opening round of the SEC Tournament, 3-1, to Vanderbilt.

Dylan DeLucia was effective despite receiving the loss. The junior allowed two runs on six hits in 4.1 innings. Josh Mallitz gave the Rebels length out of the bullpen and kept the Rebels in the fight, allowing a single unearned run over 3.2 frames.

After escaping a bases-loaded threat in the first and setting down the Commodores 1-2-3 in the second, Ole Miss surrendered a 1-0 lead to Vanderbilt in the third on a two-out rally, with Dominic Keegan shooting a single up the middle to plate Spencer Jones.

Following a leadoff single in the fourth, extending his hitting streak to 12-games, Kevin Graham advanced all the way to third. However, the Rebels were unable to bring home the tying run, leaving the score at 1-0.

The Dores doubled the advantage in the fourth, but the damage could have been far worse as Mallitz came on with the bases loaded and one out, allowing only a Parker Noland RBI groundout to second.

Vanderbilt tacked on another run in the sixth, taking advantage of a Rebel error. However, Justin Bench singled in the seventh to bring around Peyton Chatagnier from second, giving Ole Miss new life. Unfortunately, the Rebels couldn’t keep momentum rolling, bowing out in the opening round in Hoover.