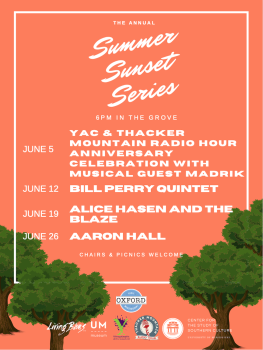 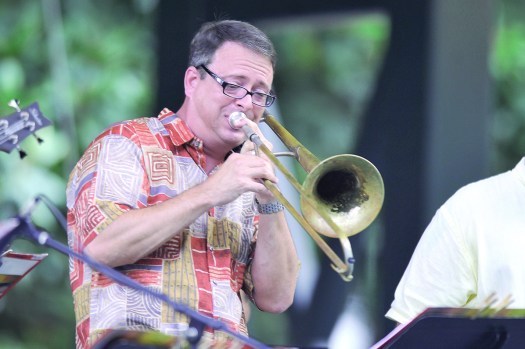 This June, the annual Summer Sunset Series returns to the Grove stage on the campus of the University of Mississippi.

Summer Sunset Series is a community event made possible through a collaboration of Visit Oxford, Yoknapatawpha Arts Council, the Center for the Study of  Southern Culture, and the University of Mississippi Museum.

Each Sunday night in June, starting at 6 p.m.,  locals and visitors alike can bring a blanket or lawn chair and set up their own picnic to listen to live music.

To commemorate these milestones,  Yoknapatawpha Arts Council will serve cake and punch as guests listen to a live Thacker Mountain  Radio show. Following the radio show, Madrik, a seven-piece band comprised of musicians with decades of experience drawing influences from house, hip-hop, drum & bass, pop, funk and soul, will perform.

These heavy hitters’ meticulously crafted, high-energy sets will keep you moving and grooving with their originality.

Sunday, June 12, the series will feature the Bill Perry Quintet sponsored by the University of Mississippi  Center for the Study of Southern Culture and Living Blues.

Perry has been performing music professionally since 1993 and has played in every major blues & jazz festival in Mississippi. He also performed at New York’s premier blues club, Terra Blues, with his father and legendary blues musician,  Bill “Howl-N’-Madd” Perry. The quintet features a group of passionate musicians with years of  experience to provide the crowd a unique, heartfelt show.

The University of Mississippi Museum is the sponsor of the June 19 concert featuring Alice Hasen and  the Blaze. Hasen began her musical studies at the age of four with a background in classical traditional,  but is now most at home at the crossroads of genre, pushing the traditional violin and fiddle sounds out  of their comfort zones.

This “fiddle-powered groove band” is rooted in the Memphis heritage of funk,  rock and jazz but can stray into pop, hip-hop and even reggae territory.

The final performance of the Series will feature local musician Aaron Hall sponsored by Yoknapatawpha  Arts Council. Originally from Hattiesburg, Hall’s music is relatable with his adept storytelling. His true passion of songwriting is portrayed through his music and lyrics.

Please note there will be no relocation for weather.

For more information on the Summer Sunset Series, go to visitoxfordms.com.