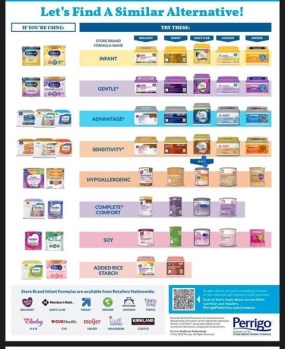 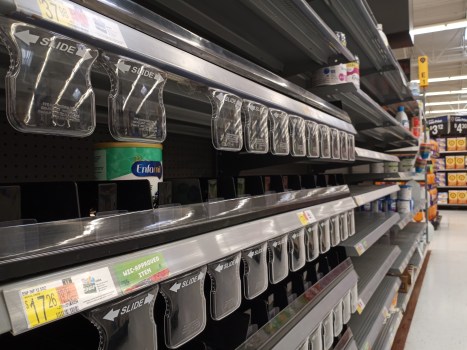 Rows of shelves in the 'Baby' section sit veritably empty on a Wednesday (May 25, 2022) morning at the Walmart in Oxford located on Jackson Avenue East. Walmart is one of many big box stores that have been affected by the infant formula shortage in the United States. (Photo: Maya Martin/The Oxford Eagle) 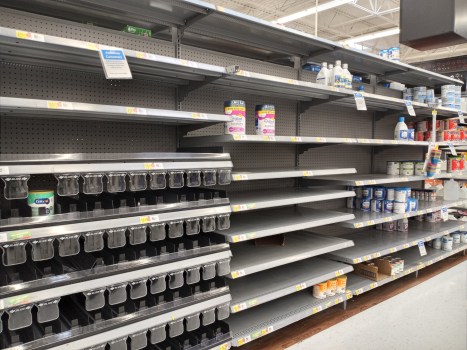 Rows of shelves in the 'Baby' section sit veritably empty on a Tuesday morning at the Walmart in Oxford located on Jackson Avenue East. (Photo: Maya Martin/The Oxford Eagle) 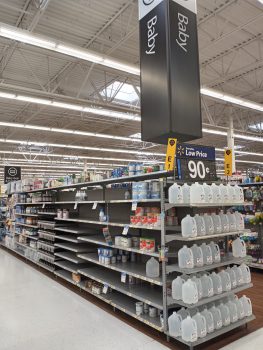 Walmart is one of many big box stores that have been affected by the infant formula shortage in the United States. (Maya Martin/The Oxford Eagle)

Sam Gilbert, mother of 8-month-old twins, is one of many parents across the United States facing the infant formula shortage.

“The particular kind we use, Enfamil Gentlease, is very common, but it started getting difficult to find in stores around March,” Gilbert said. “However, I was still able to purchase it on Amazon, along with a comparable substitute at Sam’s Club. At the beginning of May, my shipment from Amazon kept getting delayed. We had two containers left, and I started to worry we would not get our package in time.”

But the Amazon shipment was delayed and her stock of formula was dwindling so Gilbert enlisted to help of her parents and other family members to look for more formula.

“My grandmother checked every store in Tupelo, but could not find a single container of Enfamil Gentelase,” she said. “In addition, the comparable substitute at Sam’s Club was completely sold out, along with Target, Walmart, and Costco. Thankfully, we received our Amazon order right before running out of our last container.”

In addition to the long-awaited delivery, Gilbert’s friends obtained four regular-sized containers and two sample containers from a couple of friends who no longer needed them. The additional formula was welcomed since Gilbert could not locate more of the Enfamil Gentlease in stores or online.

Gilbert was fortunate to receive her delivery and have generous friends, but the supplies will only last so long. Now she has about eight 27-ounce containers of formula left, but since she is feeding twins, one container will be used in four to five days.

“We constantly stay on the lookout, and this issue definitely adds stress on our family,” she said. “It’s a scary situation to think about any baby going hungry due to a lack of formula in the United States.”

A Pediatrician’s Insight and Advice to Families

Local pediatric clinics are coming face to face with families just like Gilbert’s who are having difficulties in finding formula after the major recall.

“Initially the major recall was for Similac’s Alimentum which is a specialty formula for children who have a milk protein intolerance and cannot tolerate regular formula,” said Dr. Tanya Fitts, pediatric physician at Lafayette Pediatric Clinic. “There are basically two specialty formulas that are used. There are other brands of that formula but it is generally only made by two companies.”

“We were having difficulty initially locating enough stock of Nutramigen which is made by Mead Johnson,” Fitts said. “So a lot of that has been a little bit alleviated because we do as pediatricians get samples of formula to give out to our patients, but we had depleted all of our sample stores trying to give people who needed formula some formula.”

Lafayette Pediatric has recently managed to replenish its stores of baby formula for the families they serve but local stores are not seeing the same treatment.

After the recall of Alimentum, other types of Similac followed creating a domino effect. Shelves in local big box stores that displayed rows and rows of baby formula stand empty. People who search online for local stocks of baby formula encounter the unavailability of in-store pickup or must await three-plus days of shipping for their delivery.

“It’s spilled over from the Nutramigen and Alimentum into others because formula is made and it doesn’t have a very long shelf life,” she said. “What was in the storehouses were depleted very quickly.”

The unavailability and wait times are worrying as families can go through containers of formula quickly and the lack of formula can be detrimental to an infant’s health.

“It’s very important that infant gets infant formula because of the way it’s made with the concentration of the proteins and the vitamins,” said Fitts. “Infants can get sick if they are not fed the appropriate formula or human breastmilk.”

And as families endure the shortage, the pediatrician warns them not to water down the formula to make it stretch for longer.  “That is what leads to infants having hyponatremia,” Fitts. “Essentially, it’s a sodium imbalance in their body and that can be life-threatening.”

In a hospital newsletter, two children have been hospitalized at Le Bonheur due to the formula shortage. Both are children with short gut syndrome who required treatment IV fluids and supplemental nutrition.

“I’m pretty sure every children’s hospital nationwide is seeing that as well,” Fitts said.

The panic has motivated families to stockpile baby formula which, as we learned from the toilet paper and sanitizer shortage at the beginning of the COVID-19 pandemic, only exacerbates the effects of the shortage.

Even more taxing, online sales and hoarding is causing the prices of formula to increase. What would typically cost $1,800-2,000 a year to feed an infant baby formula will potentially increase as the shortage persists.

“I would recommend that people buy no more than a 10 to 14-day supply so that other families have access to that formula because it will be restocked and with those deliveries from Europe, those will reach the shelves fairly quickly,” she said.

While the government deals with shipments of formula from across the pond, Lafayette Pediatric is working closely with local Women, Infants and Children’s Nutrition Program centers to help families get waivers so they can get other brands of the same type of formula.

“They do have some stock at the central WIC office of Nutramigen and we’ve been able to work with local WIC nutritionists and get some formula shipped directly to patients’ homes,” said Fitts.

“WIC is advising participants to continue to use the participant complaint process when issues occur, and it is following up and providing additional information when possible,” said Sharlot.

As participants receive their supply, WIC staff will communicate with manufacturers and wholesalers to learn more about where shortages exist.

If families are still having trouble finding stock of baby formula, local pediatricians encourage families to explore small retailers and stores that might have some in stock and regularly check online availability for local stock. Swapping formula with another parent is allowed, but be sure to check expiration dates.

Substituting cow’s milk for formula is allowed only if the infant is 9 to 10 months of age and tolerant of milk proteins. Cow’s milk should only be used if necessary and only for a few days at most. However, do not change formulas unless instructed to do so or after consulting with your pediatrician.

If you can only find generic formula brands in stores, have no worries.

Generic brands are safe to use as long as they are well-regulated and it’s OK to switch among certain brands because they are made by the same company. Walmart’s Parent’s Choice, Walgreen’s Well Beginnings, Target’s up & up and Kroger’s Comforts for Baby are all made by Perrigo Nutritional.

“If you feel like you can’t switch between brands, just know its all made under the very same facility,” Fitts said.

Officials anticipate the shortage to last for several months, but with the shipment of formula arriving from Europe and the passing of the Access to Baby Formula Act, there is finally hope for millions of families. The act ensures that those who rely on WIC will have access to the formula they need amid the shortage.

The Call to Action

However, in a letter to the White House, the American Academy of Pediatrics calls it to take innovative, rapid and clear actions as families are in need of resources and clear communication.

“Pediatricians across the country are providing guidance to families, caring for children who are now hospitalized due to not having access to formula products, and doing our best to connect our patients with what little supply exists, but we need help,” said AAP President Dr. Moira Szilagyi. “This moment calls for innovative ideas, rapid action and clear, coordinated communication. Families are panicking and infants’ health and nutrition are at stake.”

“We are especially concerned about formula-fed infants younger than six months who rely on formula as their sole source of nutrition, and children with metabolic and other conditions who rely on specialty formulas no longer in production in the United States,” Szilagyi continued. “These families have even fewer options. Pediatricians are here to support them, but we need an urgent solution to this crisis. Every parent and pediatrician knows that a hungry baby cannot wait an hour, let alone several more weeks or months.”

To find a similar alternative for infant formula, view above or read the Infant Formula Alternatives graphic here.