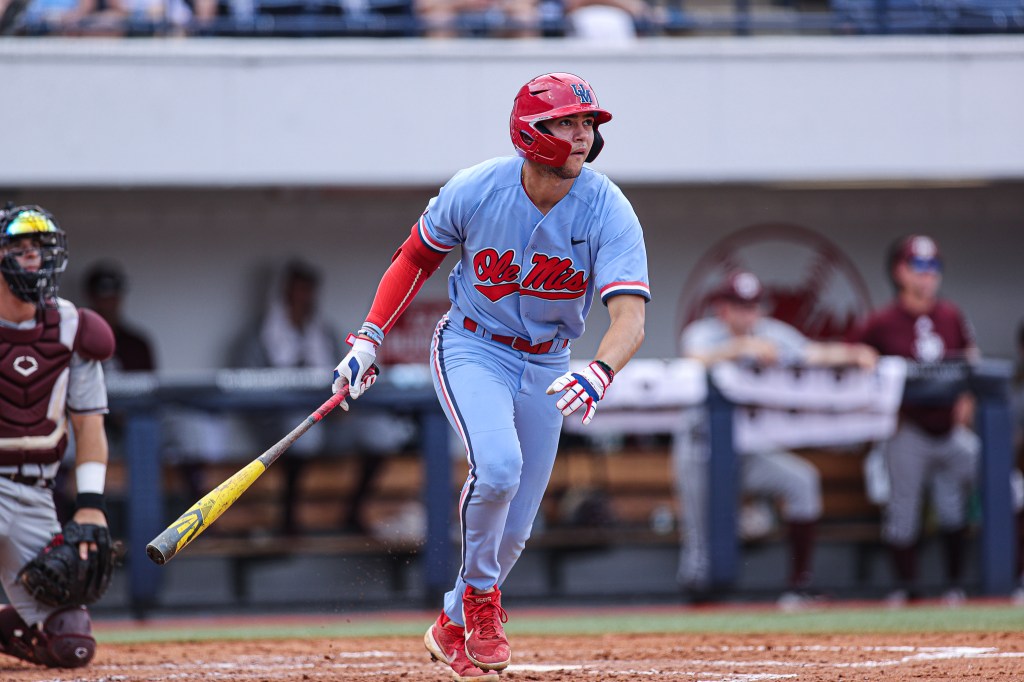 Ole Miss shortstop Jacob Gonzalez hits a solo home run in the bottom of the third inning in the Rebels' 12-5 loss to Texas A&M in Oxford on Saturday, May 21, 2022. Gonzalez was selected as a preseason First Team All-American by Perfect Game this week. (Josh McCoy/Ole Miss Athletics)

DURHAM, N.C. –Ole Miss shortstop Jacob Gonzalez has been invited to the 2022 USA Baseball Collegiate National Team, which will be managed by Ole Miss head coach Mike Bianco this summer.

It is the second-consecutive season that Gonzalez will don the Stars and Stripes. The California native was one of three Rebels invited to last season’s Collegiate National Team, joining Derek Diamond and Hayden Dunhurst. At least one Rebel has been selected to the Team USA in each of the last five seasons.

A First Team All-SEC selection at shortstop, Gonzalez has met rising expectations after a stellar true freshman season in 2021. This season, the Glendora High School product has done it all for the Rebels, scoring 57 runs to rank eighth in the SEC during the regular season, hammering 16 home runs to rank 10th.

When not pummeling pitches out of the park, Gonzalez has shown a tremendous eye at the plate, ranking fifth in the SEC with 44 walks during the regular season. The sophomore owns a .415 on-base percentage this season, reaching base in each of the last 20 games, and ranks second on the team with a .597 slugging percentage.

A top 2023 MLB Draft prospect, Gonzalez also excels in the field. In addition to making countless highlight-reel plays either deep in the hole or up the middle, the sophomore owns a .947 fielding percentage and has contributed to 19 double plays this season.