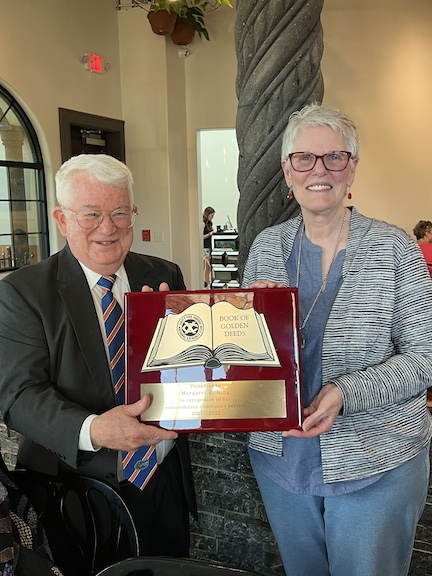 Exchange Club of Oxford Mike Brownlee presents Margaret King with the Book of Golden Deeds award, given to an unsung hero of the community. (Photo: North Mississippi Exchange Family Center)

For underserved people in need across Lafayette County—whether children, elderly veterans or the homeless—Margaret King of Oxford is always on call. Unfailingly kind, empathetic and friendly, King has been a driving force for service to others in Oxford and Lafayette County for decades.

King has served as past president of the Exchange Club of Oxford and in other leadership roles within the organization. She is currently a tutor for King Tutoring, working alongside her twin sister and best friend, Katherine King. A graduate of Ole Miss, King has been a teacher and has worked for the federal court system, the Farmers’ Home Administration and Oxford University Bank.

But, more importantly, King is a community leader with a servant’s heart—and she gets things done, noted Denise Strub, president-elect of the Exchange Club of Oxford.

“I met Margaret many years ago through the Mississippi District Exchange Club, and she was—still is—a positive force to be reckoned with,” Strub said. “She is kind-hearted and so extremely helpful and fun. She can be tough when needed. If she sees a problem, she’s not happy until a solution is found. I believe all these attributes make her a great leader in Exchange.”

Take a car ride anywhere with King, and she’s likely to make a pit stop at the nearest convenience store to pick up snacks and any needed supplies for the local Boys & Girls Club, said current Exchange Club president Mike Brownlee, who presented the award to King on Thursday. She regularly spearheads food drives for The Pantry, collects blankets and socks for the residents of the State Veterans Home every Christmas (along with valentine cards on Valentine’s Day) and makes sure that local families in need have gifts for the kids under the tree at Christmastime.

King is the first to volunteer to help Interfaith Compassion Ministry create backpacks stuffed with essential items for homeless individuals and families. She also serves as a board member and leads fundraisers for the Child Abuse Prevention Center of North Mississippi.

King and her sister, Katherine, have authored several light-hearted memoirs, including Y’all Twins?, Which Is Which? and Our Josephine, which detailed their lifelong friendship with Josephine Sanders, the African-American woman who inspired them to lead lives of service to others.

The King sisters also co-wrote the song, “Color Blind,” released as a single by Nashville recording artist Trae Edwards in November 2018. Parts of the video for the single were shot in Oxford and featured the real-life Sanders and the King sisters as well as actors portraying them as children.

Meanwhile, the sisters perform as a rap duo, penning their own songs and entertaining the residents at nursing homes and assisted living facilities and at various events around Mississippi. Their rap numbers are both uplifting and laugh-out-loud funny, usually featuring a positive message encouraging tolerance, hope and kindness.

“Margaret has touched the lives of hundreds of people in Oxford,” Brownlee said. “She is a truly remarkable person dedicated to serving her community.”