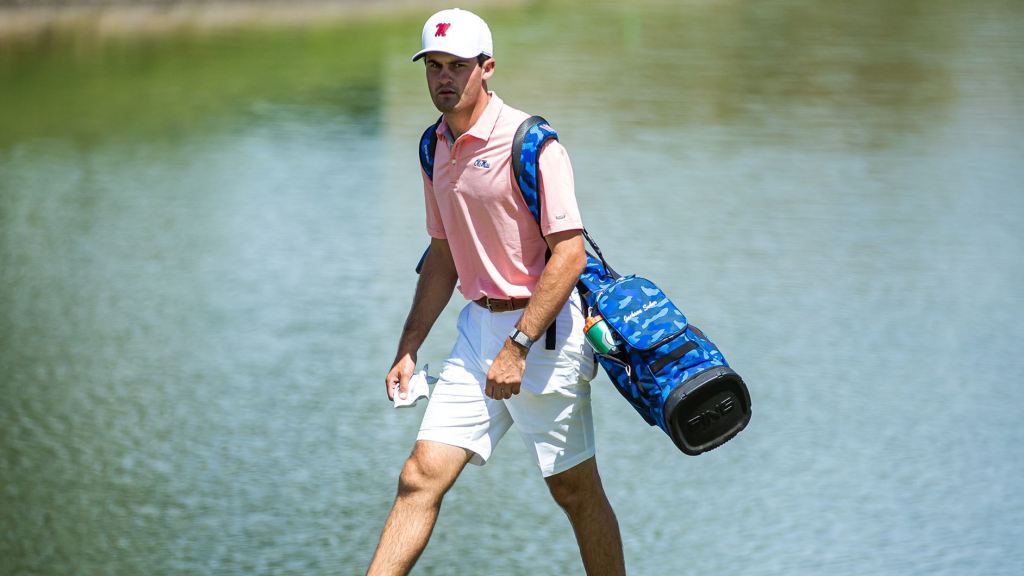 Ole Miss men's golf made the final cut at the 2022 NCAA Championships this weekend and will play in the final round on Monday for the first time since 1985. (Ole Miss Athletics)

The Rebels battled and found themselves needing every stroke they could get in a tightly contested push to qualify for day four by multiple teams. Late birdies by Jack Gnam and Kye Meeks on the team’s final hole of the day proved to be difference makers, as the Rebels slowly crawled their way up the leaderboard throughout the afternoon session before eventually beating out SEC foe Texas A&M for the final spot by just two strokes.

“I’m incredibly proud of this group for battling like they have the last three days,” said head coach Chris Malloy. “We haven’t had our best stuff but they continue to give 100 percent. We dug ourselves a little bit into a hole headed into tomorrow, but we have a chance and that’s all that we can ask for. I believe we have a special round in us.”

Ole Miss now sets its sights on surviving yet another cut, as only the top eight programs will advance to the NCAA Match Play Quarterfinals on Tuesday. The Rebels currently sit 11 strokes back from eighth place Arkansas.

Senior Jackson Suber continues to lead the way individually for the Rebels heading into the final day of the NCAA Individual Championship, with Suber’s third round score of 76 (+6) helping the two-time All-American settle into a tie for 25th. With 11 birdies over his three rounds in Scottsdale, Suber now ranks fourth in the field in total birdies on the weekend heading into Monday.

The Tampa, Florida, native eyes the program’s third top 20 individual finish ever at the NCAAs on Monday, with Braden Thornberry (1st – 2017) and Darren Cole (T6th – 1985) sitting as the only other Rebel men’s golfers to have accomplished the feat.

Evan Brown and Kye Meeks each logged rounds of 72 (+2) for the Rebels, as Brown ended the day tied for 68th while Meeks sits tied for 94th overall. Brown had a strong start to his day, logging birdies on four of his opening six holes, while Meeks tallied a pair of birdies on the day with one coming on the team’s final hole of the round.

Coming off of a round of 71 (+1) during Saturday’s second round of play, Sarut Vongchaisit capped off day three by carding a 78 (+8) in Scottsdale, tallying seven birdies across his three rounds so far at Grayhawk.

Jack Gnam rounded out the lineup for Ole Miss as he ended his day in a tie for 94th right alongside Meeks with a three-day score of 225 (+15). Carding a four-birdie round of 73 (+3) on Sunday, Gnam saved his best round of the weekend for day three, having logged back-to-back rounds of 76 (+6) on day one and day two.