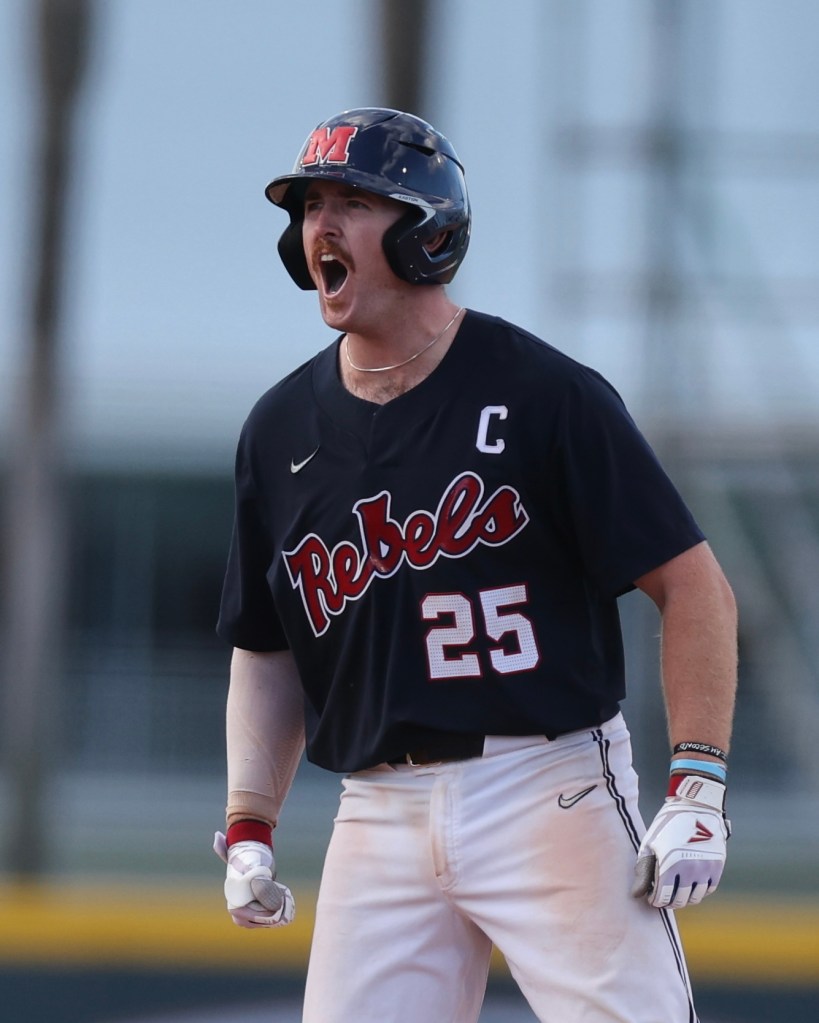 Ole Miss first baseman Tim Elko celebrates after hitting a two-RBI double in the seventh inning of the Rebels' 2-1 win over No. 6 Miami in game four of the Coral Gables (Fla.) regional on Sunday, June 5 2022. (Josh McCoy/Ole Miss Athletics)

The Rebels’ offense, which averaged over seven runs per game this season, had managed just two hits through the first six innings of their contest with No. 6 Miami in game four of the Coral Gables (Fla.) regional, but now had a chance to break through on the scoreboard after Justin Bench and Jacob Gonzalez hit back-to-back two-out singles to put the go-ahead run on base for Tim Elko.

The Ole Miss captain stepped confidently into the box, adjusting his batting gloves and taking a few practice swings before settling into his stance.

The Rebels’ senior leader did not waste any more time, driving the first pitch he saw into the gap in right-center to plate the go-ahead run from first.

The Ole Miss dugout erupted in cheers, ecstatically celebrating yet another clutch hit from a senior who has delivered in key moments throughout his collegiate career.

The Rebels cruised through the final two innings to secure the upset as they narrowly defeated the Hurricanes in a low-scoring pitching duel.

Freshman lefty Hunter Elliot was masterful on the mound for Ole Miss, surrendering just one run in five-plus innings while recording eight strikeouts.

He handed the ball over to fellow freshman Mason Nichols in the sixth, and the Jackson Prep product answered with three strikeouts in 2.1 innings to keep the Hurricanes at bay.

With five outs remaining and a trip to the regional final on the line, Ole Miss turned to closer Brandon Johnson to finish the game for the second time in as many days.

Johnson, who struggled through an up-and-down season in conference play, came up with one of his best performances of the year to shut the door and send the Rebels to their fourth consecutive regional final.

Ole Miss moves on to play the winner of tonight’s elimination game between Miami and Arizona.

The Rebels will have two chances to advance to the Super Regionals after going 2-0 to start regional play. First pitch in game one of the regional final is scheduled for 12 p.m. CT.