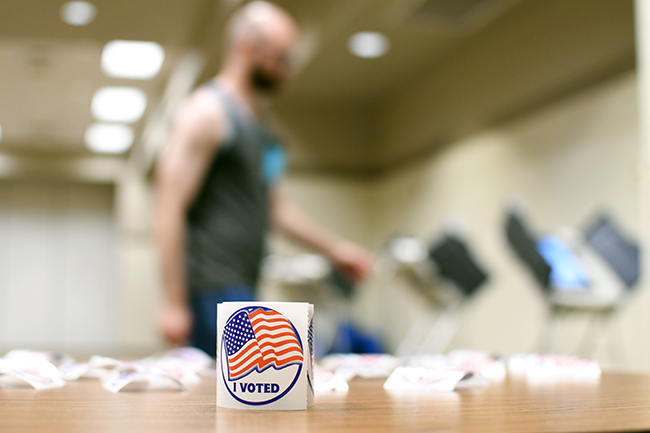 Kelly is challenged in the Republican primary by Mark D. Strauss, who has a picket fence near his home painted with slogans including “Trump Won” and “COVID tests are poison.”

A sparse ballot is making this election day a sedate one for voters and poll workers alike.

“We kind of anticipated it going into the election today since there is only one thing on the ballot this time,” said Busby. “It’s a very important position, the U.S. House of Representative, but we didn’t anticipate a lot of people turning out. Generally when you only have one thing to vote for, people for some reason don’t want to turn out.”

“It’s a pretty low turnout but people are pretty upbeat about [the election],” said District 2 Election Commissioner Max Hipp. “Typically the primaries are not as busy. People are not in the mood and they like to go for the meat in November when it’s really a contest. Also, it’s summer time. People are vacationing and they have a lot going on in their lives.”

The lack of voters can be seen at usually one of the busiest polling sites in Lafayette County: the Oxford Conference Center. The center is located in District 2 and, during Presidential or local elections, it can see a little over 3,000 voters in a night.

“About an hour ago, we had a little over 200 [people] that had voted,” Busby said. “That kind of tells you where it stands right now.”

Absentee ballots will be low as well. According to Hipp, the county has received about 100 absentee ballots and 37 of them were counted in District 2.

Other than the low turnout and votes, the Primary Election in Lafayette County is going smoothly. Busby said the only technical issue they have faced so far today was a paper jam.

Preliminary results will be tallied tonight once the polls close but full results will not be ready until all absentee ballots are received and counted.