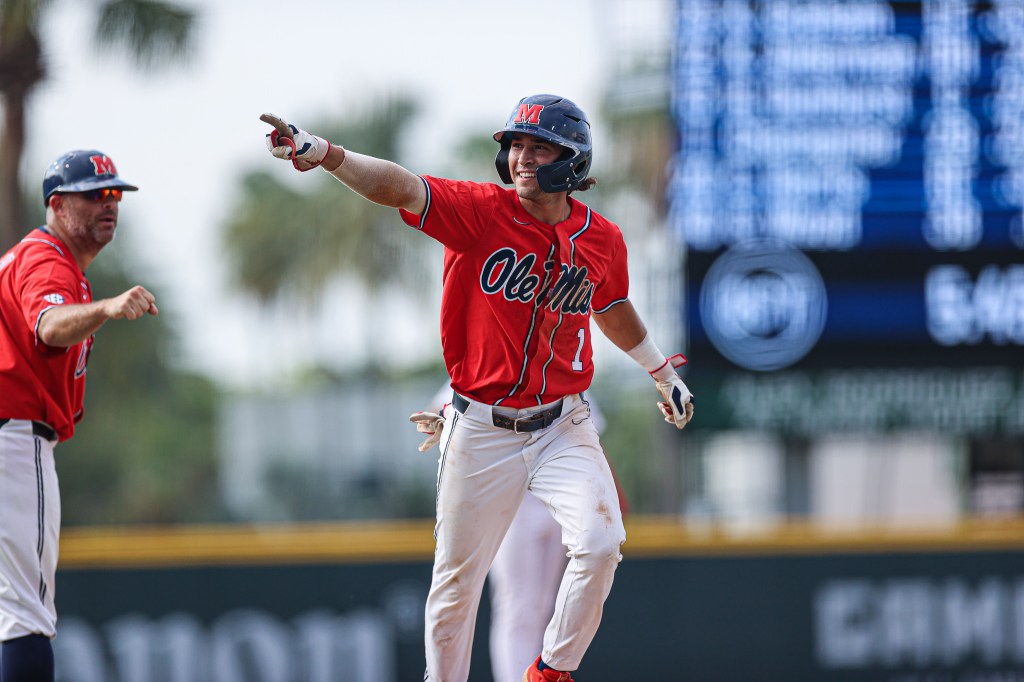 Ole Miss second baseman Peyton Chatagnier gestures to the dugout after hitting a home run in the second inning of the Rebels’ 22-6 win over Arizona in the Coral Gables (Fla.) regional final on Monday, June 6, 2022. (Josh McCoy/Ole Miss Athletics)

CORAL GABLES, Fla. –The last team into the NCAA Tournament field is now on its way to Super Regionals as Ole Miss captured the Coral Gables Super Regional with a 22-6 win over Arizona Monday night at Mark Light Field.

The Rebs put up historic numbers on the night, racking up the most runs in a single game in NCAA Tournament history for Ole Miss.

Joining the Rebel captain on the all-tournament team was Peyton Chatagnier, who batted .538 with five extra base hits and a team-high 10 RBIs, as well as Jacob Gonzalez, Hunter Elliott and Brandon Johnson.

Like they had all weekend, Elko and Chatagnier led the way on the night for the Rebels. Elko reached and scored all six times at the plate, tying the single-game runs record while smashing three home runs and posting five RBIs. Chatagnier was 4-for-6 at the dish, bringing home six runs and scoring two himself.

Jack Dougherty earned the win out of the bullpen, allowing two hits and a pair of walks over 2.1 innings. In total, the Rebel bullpen did not allow a single earned run over 12.1 innings down in Coral Gables.

Elko got the party started in the first inning, hammering a two-run shot the other way following Jacob Gonzalez’s walk. The Wildcats responded in kind, though, with Tanner O’Tremba tying the game with a two-run blast of his own.

Chatagner continued to light it up in regional play, recapturing the lead for Ole Miss in the second, pulling a two-run homer a few feet inside of the foul pole, making it 4-2 Rebels.

After Arizona cut the lead in half behind Blake Paugh’s two-run home run to left, Elko left the park for the second time, crushing a solo shot to regain the two-run advantage.

The Wildcats once again had an answer in the fourth as Paugh went yard again, another two-run homer to deadlock the game at five apiece. The tied score would not last long.

With the bases loaded, Kevin Graham beat out an infield single following a review, giving Ole Miss the lead back at 6-5. Four pitches later, Kemp Alderman clubbed a pitch to dead center, a no-doubt grand slam to blow things open.

From there, much like Friday’s would-be regional opener, the floodgates opened. Ole Miss scored eight runs in the sixth, highlighted by back-to-back two-run doubles from Chatagnier and Calvin Harris.

The next inning, Elko plastered another pitch, once again going the other way for his third homer of the game. It was the first time in the slugger’s prolific career posting three big flies in the same game and the first time a Rebel has accomplished the feat in an NCAA Tournament game.

Elko’s third homer came with some significance, giving the Rebel captain the single-season record with 22 on the year.

After Arizona scored on an RBI single in the seventh, Ole Miss put the finishing touches on in the ninth. Elko and Ben Van Cleve got on through a single and double, with Elko coming around on Alderman’s infield single. Chatagnier then put the cherry on top, rocketing a double to right-center, scoring Van Cleve and Alderman to bring the score to its resting place.

Jack Washburn came out of the bullpen in the ninth and set the Wildcats down quickly, sending Ole Miss to its third-straight NCAA Super Regional.

The Rebels won’t have to go too far in the next round, heading to Hattiesburg, Mississippi, for the Super Regionals to take on a familiar foe in Southern Miss. Information on the Super Regional will be posted to OleMissSports.com when available.