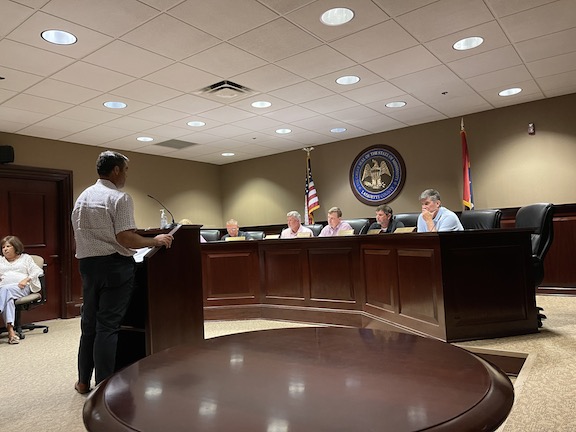 Paige York of York Developments provided an update on the Wellery Farms Wellness and Recovery Community during Monday’s Board of Supervisors meeting.

York, who is undertaking the project and has acknowledged in the past that the quaint community of Taylor was chosen for its healing and natural environment, spoke with board members about some status updates on the 130-acre recovery center project and addressed budget concerns.

York spoke of more advancements done on the developer’s behalf, such as security systems on all of the buildings, and cameras on all of the gates, which she said could potentially make it unnecessary to hire a full-time deputy sheriff.  “If the need arises … then I will absolutely commit at that juncture,” said York.  “If there’s official on-premise security that’s necessary, we will absolutely step up to the plate.”

York said a major difference between Wellery Farms and other existing local facilities is that theirs is for adults, 18 and older, which would suggest less need for extensive measures.  Another policy implemented is that nobody will be permitted to depart the facility without a ride, which is also expected to lessen the need for a deputy.

“Absolutely willing to do it if needed at the time,” said York.

She said a lot of other things have recently gone into the new site, and developers are currently six months ahead of the negotiations that are currently taking place.

Board members particularly expressed concern for the gravel road leading into the facility and asked if the developer would be willing to provide the equipment, materials and labor necessary to improve the road.

“I think we need to look at the cost of that for sure,” said civil engineer on the project, John Granberry. “Because you’re talking about a substantial amount of money over what has already been discussed.”

York voiced her support of the idea of sharing costs, suggesting the possibility of the county covering labor and the developer covering materials, which had also been casually discussed during supervisors’ prior visit to the site.  “I love that idea because even though I have the best engineer around, I just want to make sure that it’s to the specs and how you all want it done.”  She said her concern was more about the liability since it’s a public road.

Board members counterpointed York with the cruel reality that asphalt prices have recently just about doubled, and that although there’s still enough time before the first resident arrives at Wellery, the distance of the road is considerably long and could cost upwards of around $100,000.

Board President Mike Roberts said it wouldn’t be unprecedented for the county to take on such responsibility, since it had done similar for local schools.

Finally, the follow-up steps agreed upon were to have the road accurately measured before anything further on the matter should be discussed.