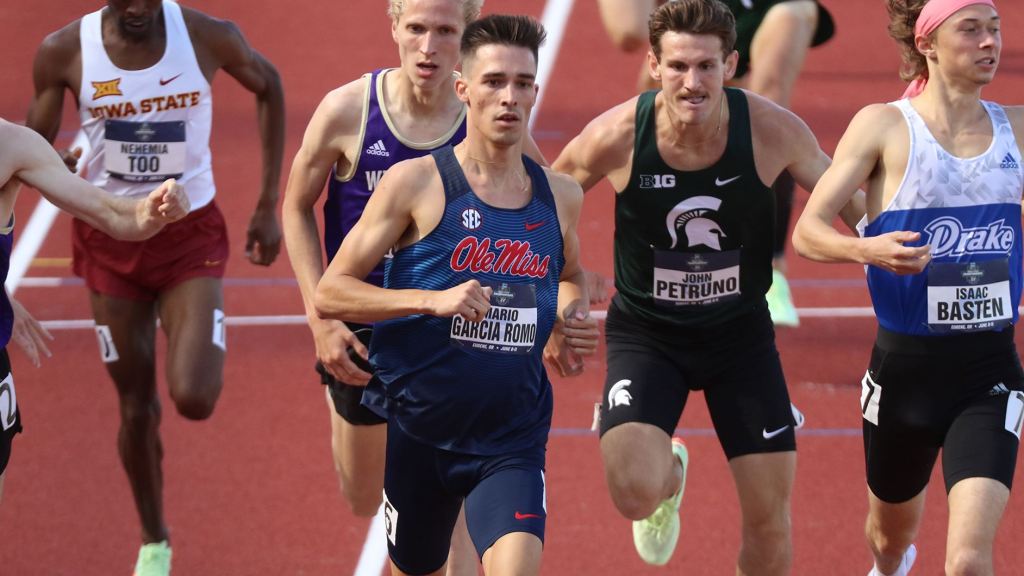 EUGENE, Ore. – Ole Miss track & field All-American senior and reigning NCAA Indoor mile champion Mario Garcia Romo again proved himself as one of the smartest racers in the nation, leading the Rebels with a masterful tactical effort in the 1500-meter semifinal on Day One of the 2022 NCAA Outdoor Championships on Wednesday.

The weather was picture-perfect at Hayward Field for the opening of the national meet on Wednesday, but Garcia Romo found himself in some stormy conditions in a contentious second heat of the men’s 1500-meter semifinal. From the gun, he found himself boxed in and as low as eighth place, but he made up for that with composure and a brilliant read of the field in order to win the heat at 3:39.32.

The pack jostled for position following the 800 split, and in the final curve before the bell lap Garcia Romo started to make his move. He made up three spots to move into fifth at the bell before dropping the hammer with a 54.93 final lap to catch the field for the auto-qualifier spot to Friday’s final. Even with 200 to go he still was in fourth place, but his closing speed was superb on Wednesday, running approximately a 26.70 final 200 and an 11.41 final 100 to cross the line first.

“I didn’t know what to do because there were so many people around me, a lot of elbows,” Garcia Romo told ESPN’s John Anderson postrace. “I just tried to stay calm until the last lap, and then I could hear my coach saying ‘Just stay on the outside’ and that’s what I did.”

This is the second career NCAA 1500-meter final for Garcia Romo after finishing fifth in 2021. The five-time All-American and reigning NCAA Indoor mile champion now has a chance to become just the 13th runner in NCAA history to complete the indoor mile and outdoor 1500 sweep.

“Every semifinal is a final,” Garcia Romo said. “This is probably my last week as a Rebel, so I’ve got to make sure I can compete as much as I can.”

Baylor Franklin came up just short of advancing following a very fast final heat of the men’s 800-meter semifinal. Franklin, who ran in Heat Two, finished 13th overall at 1:47.81 for his third career Second-Team All-American honor, but was right on the bubble with the last time qualifier spot heading into the final heat. However, Heat Three had four non-AQ times faster than his to knock him off the bubble and out of the final.

This wraps an excellent campaign for Franklin, who finished fourth at the SEC Championships at a career-best 1:46.83, and who was also crucial on two victories for the Ole Miss men at the Penn Relays back in April.

Also competing on Wednesday was junior Daniel Viveros in his first career NCAA meet in the men’s shot put final. Viveros finished 17th at 18.82m/61-9 for Honorable Mention All-America status, capping a strong junior year that saw him break the Ole Miss outdoor record twice and become the first NCAA Outdoor qualifier for the Rebels in the men’s shot put since 2009.

The Ole Miss women take center stage on Thursday, with competition beginning for the Rebels at 5 p.m. CT with the hammer.

REBELS IN DAY ONE COMPETITION

Super Regional watch party to be held at Swayze…