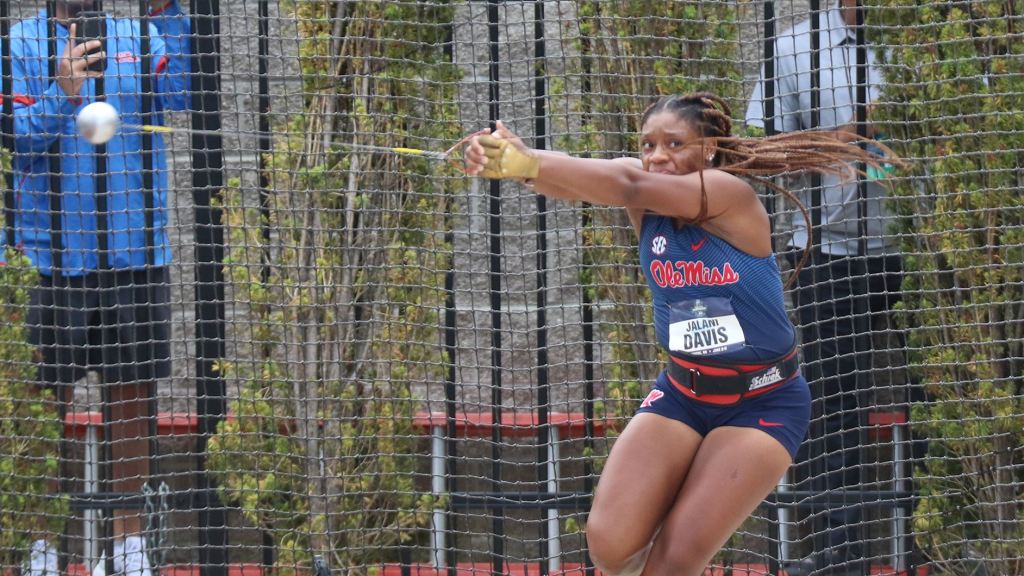 Davis – a native of Hampton, Virginia – put together a mammoth career-best performance for the Rebels in the women’s hammer, earning her first career First-Team All-America nod with a sixth-place finish. On her second attempt, Davis unleashed a huge four-meter PR of 69.53m/228-1, which stood up to scrutiny after the second flight and then the final in order to get the Rebels on the board.

Reigning NCAA Indoor mile runner-up Sintayehu Vissa put herself in great position to add to that point total, running the top qualifying time in the women’s 1500-meter semifinal on Thursday at 4:13.13 to qualify for Saturday’s final. Vissa – the first Rebel to ever qualify in the event – was narrowly the NCAA runner-up in the mile indoors, but has been resplendent all season long, scoring 9.75 NCAA points indoors, winning three total SEC titles and having her hand in seven different school records across both seasons. That includes a blazing SEC meet record 4:08.72 that won her the SEC title and pushed her to No. 15 in NCAA history.

The Rebel women’s 4×100-meter relay of Olivia Womack, Ariyonna Augustine, Jayda Eckford and Kelly Rowe wrapped up a strong season of work with a Second-Team All-American finish in 12th place on Thursday. The quartet passed the stick in 43.75, the third-best time in school history to round out an excellent 2022 campaign that saw them chart three of the top-five times ever run in Ole Miss history. This was the seventh consecutive appearance for Ole Miss in the women’s 4×100-meter relay.

Also competing on Day Two was All-American junior Jasmine Mitchell, who doubled for the Rebels in the hammer and the shot put in her first career trip to the outdoor national meet. Mitchell earned Honorable Mention All-America honors in both, taking 18th place in the hammer at 64.38m/211-03 and 22nd in the shot put at 16.25m/53-03.75.

Men’s competition concludes on Friday, with Mario Garcia Romo looking to make the NCAA sweep of the middle distance events in the 1500-meter final at 8:12 p.m. CT, followed by Cole Bullock running in the men’s 5K final at 9:55 p.m. CT – both airing live on ESPN2.