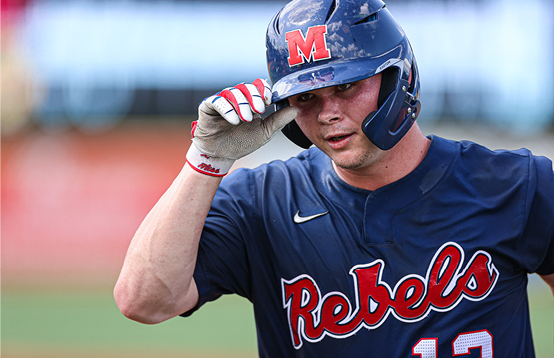 Ole Miss designated hitter Kemp Alderman tips his cap after hitting a sacrifice fly in the third inning of the Rebels' 10-0 win over Southern Miss in game one of the Hattiesburg Super Regional on Saturday, June 11, 2022. (Josh McCoy/Ole Miss Athletics)

HATTIESBURG, Miss. — Ole Miss put on a show in game one of their Super Regional matchup with No. 11 Southern Miss, coasting to a 10-0 victory over their in-state rival.

The Rebels (36-22, 14-16 SEC) carried a 3-0 lead into the middle innings before exploding for seven runs in the sixth as they blew the game open with base hit after base hit.

Second baseman Peyton Chatagnier got the inning started with a leadoff walk before right fielder Calvin Harris drove a single to right to knock Southern Miss starter Hurston Waldrep out of the game after five-plus innings of work.

Center fielder Justin Bench stepped into the box after third baseman Garrett Wood drew a four-pitch walk to load the bases, and immediately recorded an RBI hit-by-pitch as he was drilled in the hand with a first-pitch fastball.

Shorstop Jacob Gonzalez followed that up with an RBI single to left that extended the Rebels lead to 5-0 before first baseman Tim Elko drove in two more with a double to right-center.

Ole Miss continued to pile on the runs in the inning, pushing two more across the plate on a double by left fielder Kevin Graham before catcher Hayden Dunhurst drove in the 10th run of the game for the Rebels with a single to right that scored Graham from third.

The monster inning came just moments after the Rebels caught a break in the bottom of the fifth, when the Golden Eagles loaded the bases with two outs before Reece Ewing drove a ball deep down the line in right for what appeared to be a go-ahead grand slam.

First-base umpire David Savage immediately signaled foul ball however, and replay reviews confirmed that the ball passed just in front of the foul pole before leaving the yard.

“It would’ve been nice to get the home run but a foul ball is a foul ball,” said Southern Miss head coach Scott Berry. “I knew it was foul, I could see it go on the other side of the foul pole from where I was.”

The Rebels capitalized on the fortunate break as starter Dylan DeLucia struck out Ewing on the next pitch to get out of the jam and strand the bases loaded.

“That’s the reason [DeLucia] is so good—he’s able to do what the great ones do and make a pitch to get off the field,” said Ole Miss head coach Mike Bianco. “Fortunately we were able to have a good inning after that but I thought what that inning was about was him making a pitch and getting off the field with the bases loaded.”

DeLucia was masterful on the mound in the second postseason start of his collegiate career, giving up four hits and striking out nine in 5 2/3 innings.

Ole Miss cruised the through the late innings as sophomore Jack Dougherty tossed 3 1/3 innings of no-hit ball after taking over for DeLucia in the sixth.

“[I’m] just proud of the way we played,” Bianco said. “I thought offensively Mike Clement did a really terrific job preparing our guys… we were fortunate to put some really good at-bats together.”

The Rebels secured their first shutout of the season when it mattered most, and now sits just one win away from a trip to Omaha after looking dead in the water just a few months ago.

Ole Miss will go for the sweep at 3 p.m. on Sunday as they seek their third win of the season in Pete Taylor Park. The game will be available on ESPNU and the Ole Miss Radio Network.