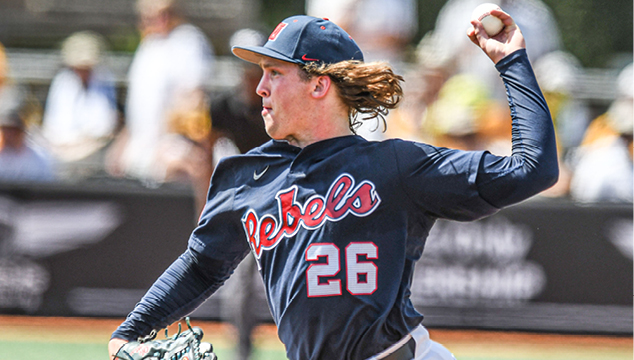 Ole Miss starter Hunter Elliott delivers a pitch in the Rebels' 4-0 win over No. 11 Southern Miss in the Hattiesburg Super Regional on Sunday, June 12, 2022. (©Bruce Newman)

HATTIESBURG, Miss — The Rebels are headed to Omaha.

After a roller-coaster regular season that saw them jump out to the No. 1 ranking in the country before losing 16 out of 25 games to fall to the bottom of the SEC standings, Ole Miss secured a 4-0 win over No. 11 Southern Miss in game two of the Hattiesburg Super Regional on Sunday to clinch the sixth College World Series appearance in school history.

Freshman pitcher Hunter Elliot was masterful on the mound for the Rebels, tossing 7 1/3 shutout innings while giving up just three hits. The 19-year-old lefty retired 16 straight batters at one point, racking up a career-high 10 strikeouts in the biggest game of his collegiate career.

“We always knew he was good… but we weren’t sure what his role would be,” head coach Mike Bianco said of Elliott. “We put him in the bullpen but once we moved him into the starting rotation he was terrific. He’s had a lot of really good games for us but none like this. He was lights-out today.”

Ole Miss generated plenty of run offense against Ferriss Trophy winner Tanner Hall, but the Southern Miss ace worked out of trouble over and over in the early innings as the two young starters battled through a low-scoring pitching duel.

The Rebels finally broke through in the fifth inning when shortstop Jacob Gonzalez beat out a high chopper that allowed right fielder Calvin Harris to score easily from third.

They plated another run one at-bat later when third baseman Justin Bench scored on a passed ball before left fielder Kevin Graham drove in Gonzalez with a single to right that extended the lead to 3-0.

Ole Miss tacked on a couple insurance runs in the sixth and eighth innings on an RBI single by Bench and a solo home run by center fielder T.J. McCants that put the game well out of reach.

“I thought we made Hall really work,” said Bianco. “Sometimes it doesn’t work that way because you’re not scoring runs and we missed a couple opportunities early… but we were able to get the pitch count up a little bit and got a couple balls that found holes and were able to push a couple runs across.”

The Rebels pitching staff, which had not recorded a shutout all season, came up with back-to-back stellar performances to shut down the No. 11 team in the country and earn the sixth trip to the College World Series in program history.

“The question was asked a lot—you know—what does it take? I guess what it takes is don’t let the other team score in a Super Regional and you have a shot to win,” Bianco said. “I say that sarcastically but it’s true. You gotta play well and we certainly played well today.”

Ole Miss secured their first trip to Omaha since 2014 and just their second College World Series berth in the last 50 years.

Southern Miss head coach Scott Berry had nothing but kind words for his in-state rival following the game, praising the way the Rebels conduct themselves on and off the field.

“[They are] really a classy program,” Berry said. “I think the world of [Bianco], have the utmost respect for how he runs his program and how his players act.”

The Rebels took the hardest path possible to reach the tournament, sneaking in as the final team in the field of 64 after slipping to the bottom of the SEC standings in late April.

They fought and clawed their way back into contention over the final month of the regular season however, and now have a chance to do what no other team in the 129-year history of Ole Miss baseball has been able to accomplish: win an NCAA title in Omaha.

“This team is special. This team was 7-14 [in SEC play] and in a place where we’ve never been in 22 years,” Bianco said. “We’ve only been to Omaha twice but we had never been 7-14 in our league. I’ve said it over and over… so many older guys didn’t let this team go and started playing at the end like I think we were capable of. We started the season that way and now we finished it that way.”